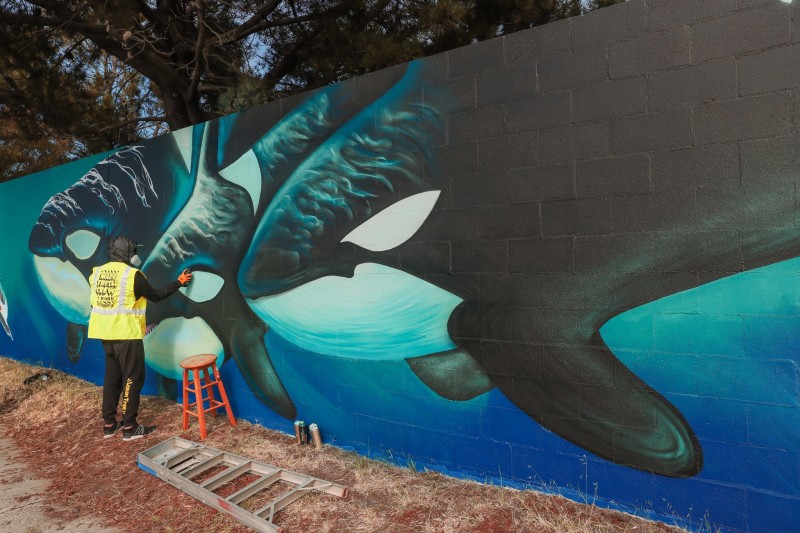 This past summer, a group of Santa Cruz muralists went to work creating an expansive 500-foot oceanic mural at the corner of Mission Street and Bay Avenue in Santa Cruz. While the artists plugged away, traffic would slow down as drivers blared their horns in support and waved their hands, craning their necks to take it all in. As the months progressed, so did the mural, growing to include a trio of looming orcas behind a white shark, a free diver descending to recover sunken plastic rubbish, and a giant squid—drawn to scale—with its tentacles reaching through the windows of a deep-sea shipwreck.

“We’re really proud of this thing—it’s been a saga and a labor of love,” says Reinhold.

About a year of planning and fundraising went into the production, requiring 45 gallons of latex paint and roughly 150 cans of spray paint. As of press time, Reinhold was still working to raise funds for a clear coat application to finalize painting and ensure that it can endure Santa Cruz’s heavy marine layer for years to come.

In partnership with Clean Oceans International, the mural, which spans the sound wall between Bay View Elementary School and Mission Street, aims to inspire and pay homage to the Monterey Bay National Marine Sanctuary, as well as the creatures that make their homes there.

The theme of single-use plastic pollution runs through the work, aptly alluding to the mission at Clean Oceans International, which is working to develop technology that can source plastic debris from the sea and convert it into clean diesel fuel, according to founder Jim “Homer” Holm.

Reinhold, whom friends know as Tay Lion, explains that the mural is a continuous expression of the ocean’s habitats, from the intertidal zone all the way down to the deep sea.

“It goes from the shallows, along the rock reefs, through the kelp forest, and then out into the Pelagic [the open sea],” Reinhold notes. “It kind of sets this story for all the creatures giving the plastic waste back to land, sort of rejecting this contamination.” 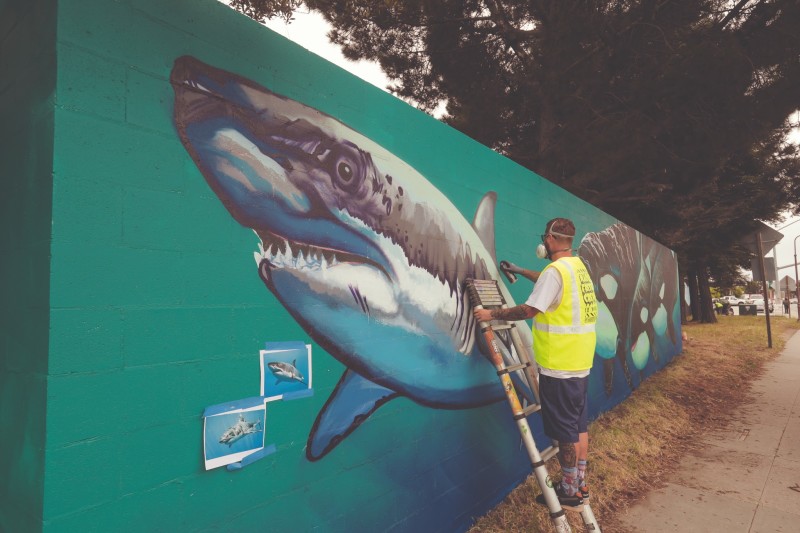 Collaborator Pfotenhauer says that the project is uniquely significant because of how many people drive by the site on a daily basis, creating the possibility of widespread impact. He hopes that the mural’s messages resonate with passersby.

“I hope it helps people to remember that we can make a difference with our daily habits and choices, like what we choose to consume,” he says. “There’s so much byproduct and waste in this world, using things once, then tossing it—it doesn’t feel right to me.”

For Pfotenhauer, these massive murals require a serious physical investment. He says that painting ocean subjects allows him to get into a natural rhythm. “We’re literally painting with our whole bodies when it’s on this scale, so you kind of have to internalize what you’re drawing and put that back out,” he says. “I like painting with motion; and [the] ocean’s got motion.”

City Arts Program Manager Beth Tobey, who helped move the project forward, says that this project has brought environmentalists, educators and artists together in celebration of values that the local community embraces.

“We’ve already received hundreds of comments in support of the mural project, and Taylor and his team have done an absolutely amazing job,” says Tobey. “I have no doubt this mural is something Santa Cruz will be proud of and will be enjoyed by generations to come, not to mention the millions of people in cars passing by this mural annually.”

According to Caltrans, the portion of Mission Street that lies west of the Bay Avenue intersection—where the mural is situated—has an average daily traffic volume of 38,900.

Reinhold says that the mural not only beautifies this section of the Westside, but also raises a proverbial flag for the community’s values.

“We have one of the most beautiful and diverse ecosystems in the world right here in our bay, and I think this mural can help remind people of what’s out there, and that it’s worth protecting and investing in,” he says. “We live on the ocean, we respect the ocean, and this portrays what we really care about in this town.”