In an effort to reduce humanity’s collective carbon footprint, new fields of scientific study have emerged. the act of modifying the planet to combat climate change is known as geoengineering. While there are many proposed methods of geoengineering, none have been implemented on a large enough scale to have much effect, largely due to additional environmental concerns. These proposed methods range widely, from releasing reflective compounds into the atmosphere to sending mirrors into orbit. Some of these proposals are much more realistic than others. One such approach entails “fertilizing” the ocean with iron sulfate, thereby stimulating phytoplankton growth. Phytoplankton then sucks up dissolved inorganic carbon from the water and sinks to the bottom of the ocean. Since dissolved carbon usually remains at equilibrium with atmospheric carbon dioxide, this process would, in theory, reduce the human carbon footprint. 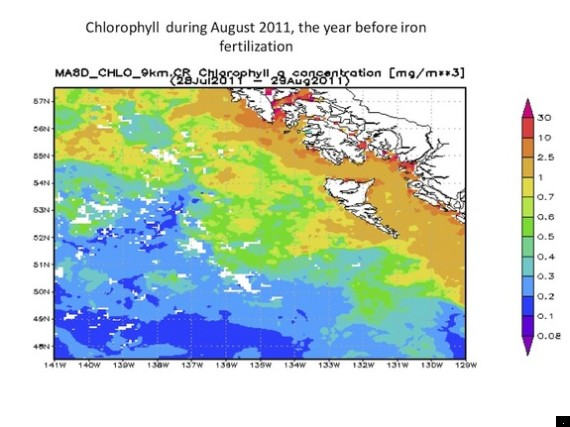 Chlorophyll levels off Canada’s west coast in August, 2011, before the controversial fertilization project. This Giovanni data portal provides standard and evaluation ocean color radiometric data products from SeaWiFS and MODIS. These data products are in support of the NASA Water Quality for Coastal and Inland Waters project, and the National Oceanographic and Atmospheric Administration

However this method has only been tested a few times and scientists are still relatively uncertain of its long-term effects. Experts’ uncertainty did not stop California businessman Russ George, who, in collaboration with the Haida Salmon Restoration Corporation, dumped 100 metric tonnes of iron sulfate into the Pacific ocean off the coast of Canada this July. The group did so under the pretense that they were attempting to restore the salmon population there. While an increase in salmon populations is a possible result of this experiment, George has been advocating for ocean fertilization as a means to climate maintenance for several years.

In fact, George’s advocacy led to the enactment of two United Nations moritoria preventing large-scale geoengineering experiments such as this. The July experiment likely broke both laws, but UN resolutions tend to be relatively toothless in cases like these. The Canadian Environmental Minister has also denied that he approved this experiment. Whether the Haida Salmon Restoration Corporation will face legal repercussions remains to be seen. 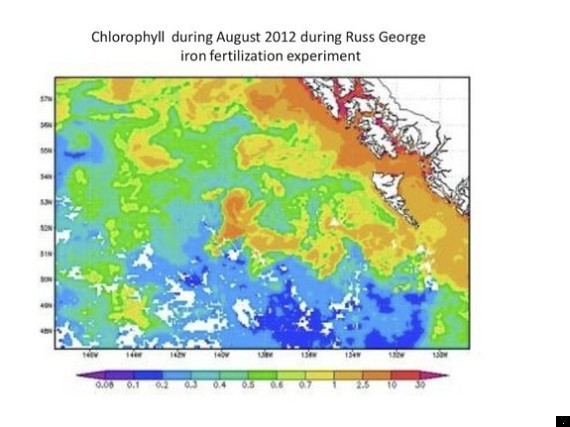 Chlorophyll levels off the west coast of Canada in August 2012, about a month after a controversial ocean-fertilization project. This Giovanni data portal provides standard and evaluation ocean color radiometric data products from SeaWiFS and MODIS. These data products are in support of the NASA Water Quality for Coastal and Inland Waters project, and the National Oceanographic and Atmospheric Administration

Geoengineering could prove to be an effective response to global climate change, but rogue, unprecedented experiments like this are not the right way to do it. For now, we should focus on reading our carbon footprint rather than potentially send ecosystems around the world into a state of imbalance.

View all posts by admin