Lighthouse Point has amazing views and an equally intriguing history, including lighthouses that have come and gone. It has even been reborn out of a tragic surf- ing accident. It’s a focal point for locals and the lifeblood of the surf community in Santa Cruz. Surfing lore actually dates back to 1885 when three Hawaiian princes came here to surf.

If you only have time to visit one landmark during your visit, consider this one. 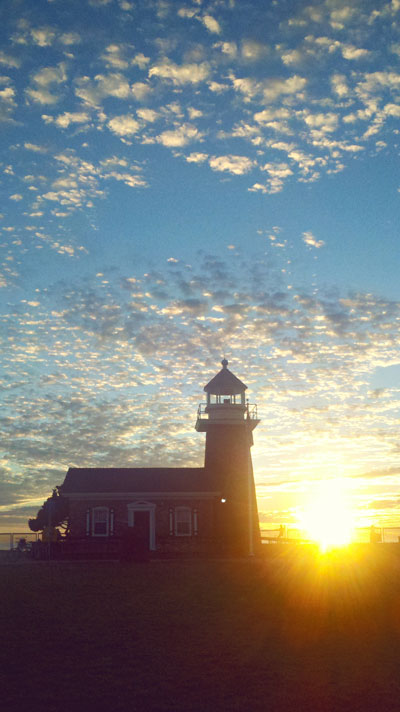 PORT CITY NEEDS A LIGHT
In the 1850s, Santa Cruz was a bustling port city. Ships dropped anchor in the natural harbor offshore and loaded up with redwood, lime, leather, and a bounty of agricultural products. A lighthouse was needed to guide these ships, so congress appropriated $30,000 for the task in 1852. Unfortunately, the title to the land at Lighthouse Point was not clear—a common problem in the post-Mexican California of the 1850s—and the money was actually returned unused. It was not until after the Civil War that the title issues were settled. The lighthouse was finally built in 1869, but this time congress only appropriated $10,000.

GEOLOGY & THE FIRST LIGHTHOUSE
Lighthouse Point is composed of a particularly resistant part of the Purisima Formation. However, there are weak spots. The original lighthouse location was close to the cliffs where three large caves were undercutting the point. One came to within 12 feet of the lighthouse. To save it from potentially catastrophic erosion, in 1879, just 10 years after it was built, the lighthouse was moved 300 feet inland, to the landward side of West Cliff Drive. It stayed there until 1948.

A LONG RUN COMES TO AN END
In 1939, the Coast Guard assumed responsibility for all of the nation’s lighthouses. Two years later, the Coast Guard installed an automated beacon on top of a white wooden tower and decommissioned the Lighthouse. The light from the beacon was less than half as bright as that from the Lighthouse (11,000 vs. 25,000 candle-power units). By 1930, shipping largely disappeared as goods were moved primarily via trucks and trains. Installation of the weak light, which was only good for local fishermen, who complained mightily that it couldn’t be distinguished from the headlights on West Cliff Drive, reflected this reality.

The lighthouse facilities were used briefly during World War II to house 200 soldiers stationed there. It was an all-black unit, which was quite a change for a town whose black population had previously been 18. The reactions ranged from welcoming to blatantly prejudiced. On the welcoming side, the city offered USO shows, and the soldiers played baseball against the local high school. On the not-so welcoming side, the city fathers tried to make parts of the town off limits to these soldiers. The local military chaplain, incensed, threatened to boycott “the whole damn town.” Local businesses ultimately squelched their inner racism.

Post-WWII, the lighthouse was not serving a particular purpose, and was demolished. From 1948 until 1967, Santa Cruz had no lighthouse, just a beacon with a weak light. In fact, a petition drive to the Coast Guard in 1959 did result in an upgrade to 80,000 candle-power units; a huge improvement that made the fishermen happier. 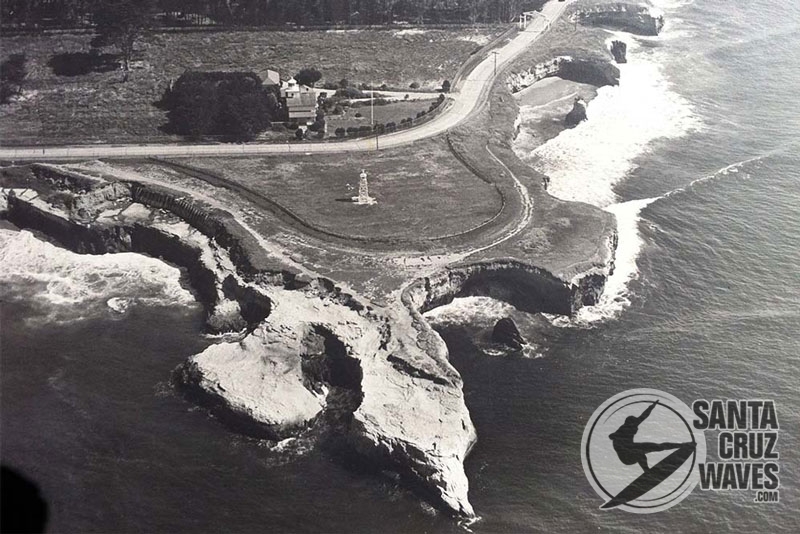 Aerial view of Lighthouse Point circa 1941. You can see the beacon and the old lighthouse on the north side of West Cliff Drive. Photo: Ed Webber, Courtesy of Frank Perry

OUT OF SADNESS: A NEW LIGHTHOUSE
The beacon might still be the only light here today, if not for the tragic death of a local boy named Mark Abbott. On a Sunday morning in February 1965, Mark left for the beach with his friends. He went body surfing and never returned.

His body was later found floating motionless in the water.

Amazingly, Mark’s parents, Chuck and Esther Abbott, were able to turn their grief at losing a child into something posi- tive for the community. With the support of the city council, the community, and a $20,000 life insurance payout, they built the Mark Abbott Memorial Lighthouse. The new lighthouse, complete with a rotating light, was opened and dedicated in November 1967. The new lighthouse honored Mark, but the Abbotts made sure it honored even more than their son. A bronze plaque inside the lighthouse reads: “This lighthouse is further dedicated to all our youth whose lives, through fate or misadventure, are terminated before realizing their true potential. May their spirits find new dimension in the unknown horizons that await us all.”

SURFING TAKES ITS PLACE
The Mark Abbott Memorial Lighthouse, and indeed the whole Lighthouse Point area, has grown to be a very special nexus of expression for the Santa Cruz surfing community. In 1986, due to the efforts of local surfers, members of the Surfrider Foundation, and the Santa Cruz Longboard Union, the world’s first museum dedicated solely to surfing was created and housed in the Mark Abbott Memorial Lighthouse. It contains a collection of photos, surfboards and memorabilia that come from the local community. If the Surfing Museum is open (10 a.m. – 5 p.m., closed Wednesdays), go in and see the exhibits and the shrine to Mark Abbot.

The spirit of honoring the past can also be seen here in several well-done plaques and monuments. Some speak to stories I haven’t told here. You’ll also see much surfing. If there are any waves to speak of, there will be surfers at the adjacent and famed Steamer Lane. You might even glimpse a local surfer jumping off “The Point” to catch a wave out at “Third Reef.”

Other official and unofficial community-inspired monuments to surfing can also be seen along West Cliff Drive.

Check it out more at Mobileranger.com.

Read more from Vol 1.1 or Subscribe to SCW Magazine!