The main stage, gondolas, and floats for the Venetian Water Carnival.
Picture courtesy of and © Santa Cruz Public Library.

The Venetian Water Carnival was an annual event along the San Lorenzo River in Santa Cruz, California, from 1895 to 1927. It was based on water carnivals in Venice, Italy. The City fathers hoped it would bolster the idea that Santa Cruz was the “Florence of the West.”

At a time when hardly anyone had electricity in their home, this event was at the forefront of modern technology and was a huge party! It featured strings of lights powered by an electric generator, fireworks, and late night concerts. A giant projector flashed SANTA CRUZ VENETIAN WATER CARNIVAL as guests sat on the side of the river to watch the events. 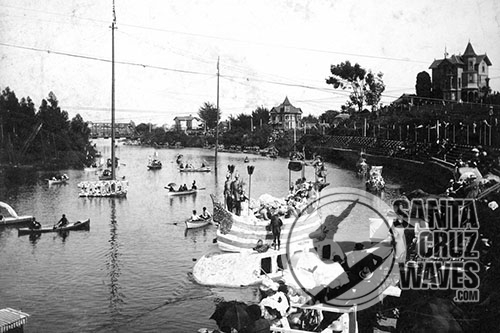 The carnival opened with a great show. Miss Anita Gonzales, the carnival queen, stood at the beach as ships from the all-steel Pacific Fleet “bombarded” the city and sent launches ashore in mock battles. There, Queen Anita would cry “Peace shall prevail this carnival week!” and a floral parade would ensue down Pacific Avenue. The last day of the carnival was “Hi-Jinks Day,” complete with a masquerade, burlesque, and a fat man in a dress who was crowned “hobo queen.”

After the boardwalk opened in 1904 and grew in popularity the impetus for the water carnival slowly started to fade. The last water carnival took place in 1927 but it provided the inspiration for other local festivals, like Capitola’s begonia festival, beginning in 1954.