Dave Grimes is quickly becoming a fixture of the local comedy scene with his penchant for puns and literary-infused sense of humor. By day he works for a natural education school, but by night, you can often find him dropping jokes like they’re hot at places like the Red Room, the Blue Lagoon, the Mediterranean in Aptos and Surf City Billiards, among others. 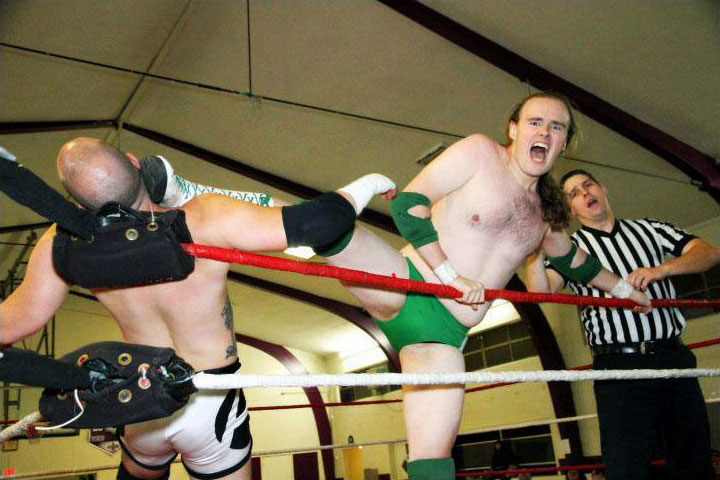 The bespectacled, mild-mannered seeming Grimes is no stranger to performing—it turns out he used to be a professional wrestler.

And not of the Greco-Roman style. No, full on WWE, Hulk Hogan-style wrestling.

See, Grimes had long been something of a theater geek. As a teenager growing up in Massachusetts, he went through a growth spurt that shot him up to 6’2” and he says he start- ed to realize he wasn’t getting as many roles. In college, he started watching wrestling with a critical eye, looking at the story lines, the reactions and, well, the theatrics.

“I got a little obsessed with it,” he says. After graduating from college in 2007, he started training with two former WWE wrestlers in a dimly lit, dingy warehouse that was freezing in the winter and scorching in the summer. The floors were dirty and bare, the mats literally duct-taped together. De- spite that off-putting appearance, he says it turned out to be great training. He had no athletic training and after six months, he’d gotten to a cool 290 pounds.

He says he took to everything quickly and it wasn’t long be- fore he’d booked his first match.
“It was really exciting and absolutely terrifying,” he says.

The thing is about WWE- style wrestling—and Grimes isn’t shy to admit this—is that it’s all about the theatrics. So naturally he had to cultivate a persona, and thus Perry Von Vicious was born.

An acquaintance had suggested the idea of performing as this sort of rich snob archetype and Grimes liked it—it just stuck, he says. He’d start out wearing a suit, clean-shaven but with a ponytail—and then he’d get changed and get into the ring. 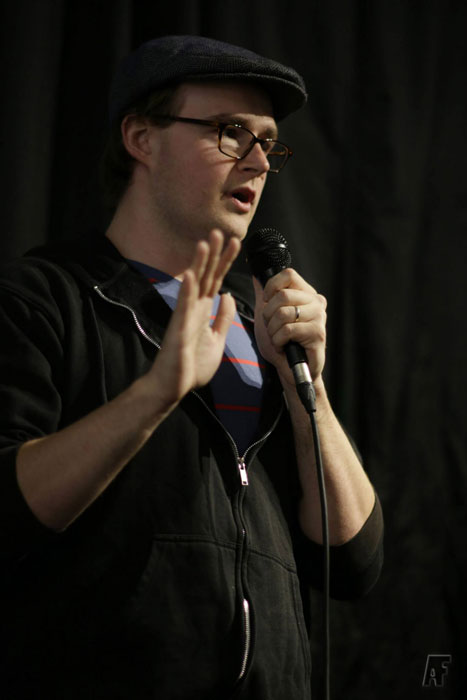 He did this for nearly six years. Apparently, these kinds of events have an almost cult-like following and Grimes/Von Vicious says “pretty much any weekend in Northern California, you can find matches going on.”
The venues run the gamut from open-air flea markets to what Grimes calls the “legendary” APW garage in Hayward, where apparently a “lot of the big names [in wrestling] have gone through.”

Unlike other professional sports, in this kind of wrestling, you don’t have to have a league affiliation. Grimes says he was independent, though he did have a manager.

So here’s the thing about wrestling—it is choreographed, to a certain degree.

“We know who is going to win or lose before a match,” says Grimes. “We have a skeletal idea of what we will do in the ring.”

Still, he says that improvised is a better description than choreographed. Sometimes the blows would really hurt, but he says the wrestlers he has worked with all tried hard to ensure they wouldn’t really be hurting one another seriously.

Eventually, however, Grimes decided his wrestling days had reached their apex. He wanted to leave while still young and healthy—healthy enough to go hiking with his wife, for instance, says the 29-year-old Grimes.

And in just a few days after officially leaving wrestling, he decided to give comedy a whirl. The idea of the performance appealed to him, as did the improvisational quality.

“I think it helps that wrestling is such a performance, less than a sport,” he says of the transition.

Nowadays he dabbles heavily in stand-up, recording every one of his sets so he can go back and critique them.

“There are definitely nights where I’ll think ‘yeah, I could have stayed home with my wife instead of talking to an empty room,’” he says of the local comedy scene.

But that isn’t stopping him. He says the support of the local comedy community has been invaluable. His preferred venues have been the aforementioned Mediterranean in Aptos and Surf City Billiards in Santa Cruz, as well as the Improv in San Jose and Rooster T. Feathers in Sunnyvale. He credits local comedian, promoter and jack-of-all-trades Stoney Godet for really helping him get his own act going.

As far as his comedy style goes, Grimes says he likes out-of-left field one-liners, and is inspired by comedians like Demetri Martin and Zach Galifianakis. His Bachelor’s degree in English has definitely influenced his tendency toward wordplay, he says.

And while comedy is his performing art of choice these days, that doesn’t mean Perry Von Vicious (Facebook.com/PerryVonVicious) is totally dead. He’ll be coming out of semi-retirement for a special performance right here in Santa Cruz at the Cocoanut Grove Ballroom on June 25. Until then—well, and after then—you can check out his comedy on his comic Facebook page at facebook.com/dgrimescomedy

Read more from Vol 1.1 or Subscribe to SCW Magazine!

View all posts by Guest Author