Lexington Reservoir in May, 2010. Photo by Ernest McGray, Jr.

As you drive over Highway 17 past the Lexington Reservoir, the water level reminds you if it’s been a particularly wet or dry year but probably not of the two towns that disappeared with the rising waters. In the third year of a statewide drought, the water is currently low enough to reveal the flooded remains of the ghost towns of Lexington and Alma. An old bridge. The stone foundations of family homes. The cement ribbon of the old Santa Cruz Highway. Today’s reservoir was named after one of these towns, a stage coach stop en route to Santa Cruz. The town of Lexington burned bright for a short while, profiting from the logging industry and achieving infamy from a brutal murder.

Home to the first sawmill in Santa Clara County, the town of Lexington (first called Jones’ Mill) was established in 1857. By the year 1867, Lexington was the main commerce center between San Jose and Santa Cruz, Los Gatos just a small crossroads (then called Forbes Mill) in its large shadow. Lexington profited from heavy logging of the virgin redwood forests that grew thickly throughout the Santa Cruz Mountains and from high quality leather and tan bark that was in high demand at the tanneries in Santa Cruz County. Pack mules delivered the tan bark through the mountains to Santa Cruz, and although less than 25 miles, the trip in those days was a far cry from a quick thirty minute drive. 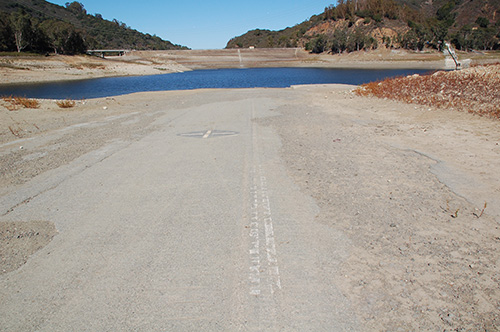 A stretch of the Glenwood or Old Santa Cruz Highway surfaces above the waters of Lexington Reservoir. October, 2014. Note the white lines: it’s the original paint! Photo © Mobile Ranger.

Before the 1850s there were no roads between Santa Clara and Santa Cruz County. It took three long, grueling days to travel between what is now Los Gatos and the summit (less than 15 miles) bushwhacking through thick brush on steep terrain either by foot or on horseback. By Lexington’s heyday in 1867 a group of Santa Cruz County residents had constructed the Santa Cruz Turnpike. This was a huge improvement to the first dirt road that was so steep and narrow wagons had to lighten their loads and take several trips, the cattle always in danger of taking a fatal slip off the road’s edge.

The Santa Cruz Turnpike was eight feet wide, built largely by hand, and was a much easier passage for horses and wagons. Still many accidents occurred and  it was not an easy road— through one section, the highway crossed Soquel Creek 25 times without any bridges. The first toll house was located in Lexington and charged a wagon and two horses or oxen 50 cents to pass. 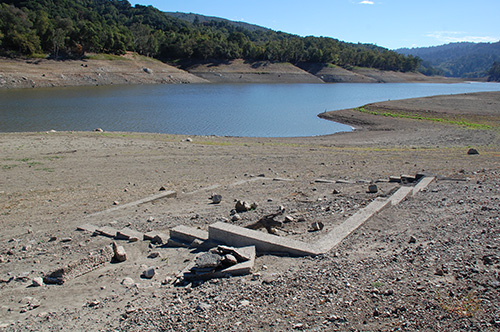 The foundation of an old Lexington building is revealed by the low waters. October, 2014.
Photo © Mobile Ranger.

Saloons as Prevalent as Starbucks

The Lexington House Hotel and saloons were busy with tourists, commuters, bandits and gamblers before the roads were rerouted to bypass the town. In the 1890s when alcohol was illegal in Los Gatos, twelve saloons lined the road between Lexington and its neighboring town Alma. It was a tumultuous period for Santa Clara County, and besides the ghosts of bandits and gamblers, the victims of a brutal murder and their killers haunt the reservoir’s waters.

In 1883 saloon-keeper L.L Majors of Los Gatos sent rancher John Showers and painter Joseph Jewell with a pistol and a pair of pliers to the mountain cabin of the well-liked William Renowden. Rumored to have $20,000 in gold stashed throughout his cabin, Renowden and his partner McIntyre met an unlucky fate that day. The pliers were brought as a torture device to pull off Renowden’s fingernails one by one until he revealed where he hid his gold. Whether or not the pliers were used is unclear, but either way, two good men lost their lives for the sake of greed.

Showers and Jewell shot Renowden and McIntyre, lit a match, and set fire to the house before fleeing with the gold. Both bodies were found in the smoldering remains of the cabin. The story ends with the violent deaths of all three murderers: Jewell was executed by hanging at San Quentin, Showers was stabbed to death in a prison fight, and the plotting Majors died in a prison break at Folsom Prison. The murder trial received national coverage and made Lexington infamous for awhile, but infamy only lasts so long. 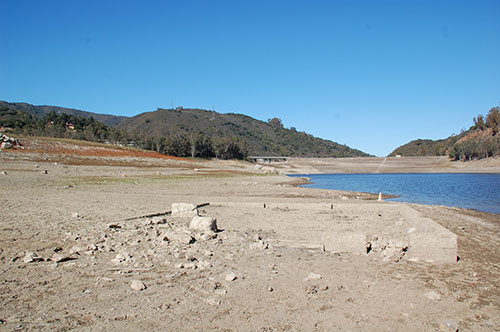 The foundation of another old Lexington building is revealed by the low waters. October, 2014.
Photo © Mobile Ranger.

Once Lexington had clear-cut all the virgin redwoods in the area the lumber mills moved to Los Gatos, depleting the town’s economy. The post office was then moved to the neighboring town of Alma in 1873, in part due to complaints from church-goers that women and children had to pass through the rowdy Lexington saloon to reach the post office located in the back. Then, in 1880 the new railroad bypassed Lexington completely, favoring Alma instead. Most of Lexington’s families moved to Alma soon after, and the town dwindled and quieted to a mere whisper of what it once was.

The town hung on, fewer than a dozen families still residing there, until the construction of the dam in 1952. Even then, an old woman refused to leave her home, preferring to hold her ground even as her house was lifted from its foundation and carted away.

Today, when the water level of Lexington Reservoir dips low enough, you can walk the same ground as the ghosts of Lexington, searching for remnants of a time gone by.