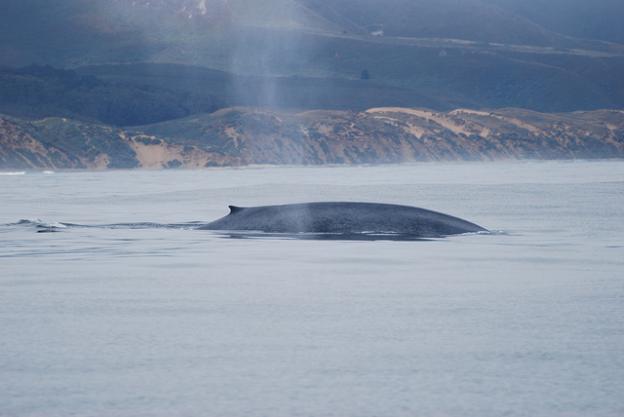 A study finds that blue whales, instead of diving when danger approaches to get out of the way, play dead. That’s not working out when ships come by. Photo by David Slater/Creative Commons.

May 11, 2015—Business and leisure sailors will want to carefully watch for blue whales while out on the water. New data reveals that the animals are not adapted to safely dodge an oncoming ship, according to Discovery News.

Published in Endangered Species Research, this study from Stanford University is the first time that whales’ reactions to passing ships have been tracked, reported the Contra Costa Times.

Blue whales don’t have an evolutionary history of ships killing them, so they haven’t developed the behavioral reflexes that would prompt them to avoid ships.

To conduct the study, researchers put GPS on several blue whales off the Long Beach, CA. They tracked nine whales for 24 hours and saw the whales closely encounter 20 ships separately. The distances between the whales and ships were from 60 meters to more than 3 kilometers.

Researchers saw that the whales tended to “play dead” when they saw the ships, when they should have plunged in a fast dive to get out of the way quickly. The whales even pivoted at a slighter angle and moved at a slower speed than usual during these close encounters with the ships. (Read the rest of this article at Hilltromper.com.)

Blue whales, which are especially prone to “ship strikes” and which are endangered, have a Potential Biological Removal factor of 3—which means that only 3 adults can be taken out of the gene pool (outside normal mortality rates) without repercussions for the stability of the species. By comparison, gray whales have a PBR of 360, and humpbacks have one of 11.

A new app is out that lets citizens help researchers figure out where the whales are going so shipping lanes can be adjusted accordingly. Learn more about blue whales and the Spotter Pro app.

View all posts by Hilltromper