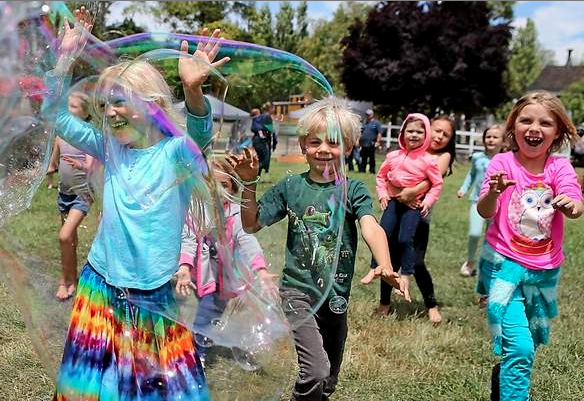 Children are engulfed by soapy bubbles as they play in the grass at Roaring Camp in Felton on Sunday afternoon during the Redwood Mountain Fair. (Kevin Johnson)

FELTON >> The Redwood Mountain Faire has become a decade-spanning tradition for generations of Santa Cruz Mountain locals and a significant source of funds for local community groups.

This weekend, an estimated 6,000 people attended the two-day festival of music, food and art. With the help of over 500 volunteers, the event is expected to raise more than $50,000 for 23 different organizations, including local museums, schools and social services.

While some members of the eight-person steering committee helped found the original fair in the 1980s, others attended it as children, according to event director Violet Anna Lieby Smith. 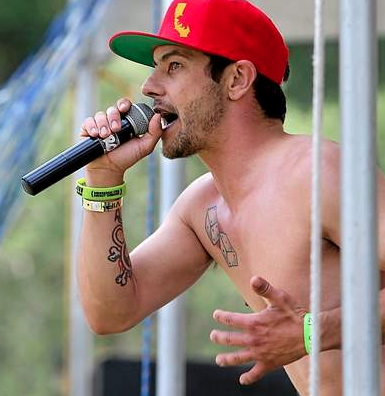 “We had great memories of it when we were kids,” said Smith. “So since the re-launch six years ago, we’ve worked really hard to keep it true to the original. Achieving super-growth is not our goal. We want to keep it intimate and maintain the family-friendly atmosphere.”

Founded by the San Lorenzo Valley Women’s Club, the fair was held for 17 years at Ben Lomond’s Highlands Park. Skyrocketing costs, however, ended the fair in 1997. After a 12-year hiatus, it was revived at Roaring Camp in 2010.

Steering committee member Eric Hammer is in charge of site and cash management for the event. He remembers sleeping on the stage and working as a roadie for the bands when he was a child.

“This weekend I have had my kids helping out,” he said. “And they’re just about the same age I was back then. The history of the fair is one of the things that make it so special.”

In addition to making memories, the fair has also made money. According to Hammer, the committee has donated nearly a quarter-million dollars to non-profit organizations.

“This is a lot of hard work; many hundreds of hours of work,” Hammer said. “But being able to cut a check for $50,000 after it’s all said and done is really an amazing feeling. And it’s nice seeing everyone have such a good time.”

As retro jazz outfit Royal Jelly Jive burned through a version of “Fever” on the main stage, three generations of Boulder Creek’s Duer family enjoyed the music from blankets spread out on the lawn.

John and Brenda Duer brought their daughters, Jenny and Andrea, to the Redwood Mountain Faire back in the 1980s. Today those daughters are 30 and 34 years old and Andrea has a daughter of her own.

“It’s bigger than it used to be, but it has that same old kind of feel,” said John Duer.

“I like the fact that there isn’t over-the-top security,” said Brenda Duer.

“And even though there’s alcohol here, it doesn’t turn into a total drunk fest,” said Jenny Duer.

In addition to two stages of live music, the fair featured numerous children’s activities, including a pool full of giant inflatable hamster balls that kids climbed inside and pushed around.

This weekend marked the fourth year that Bill Horgos has sold his “wood-carved goodies” to the Redwood Mountain Faire crowd.

“It’s got a nice festival feeling. It’s good to see the children laughing. This festival is laid back because mountain folk are special,” he said.

View all posts by Anne Courcelle