You may, or may, not know that Soif was undergoing a transformation. Like a butterfly emerging from it’s cocoon, Soif emerges bigger, more open and ready to take flight. For 13 years Soif has been a Santa Cruz favorite for wine lovers and foodies. Chef Mark Denham has a bigger, more open kitchen to create in. Wine Director, John Locke and Operations Manager, Alyssa Twelker collaborate in the more expansive wine shop, stocking it with the best wines around. Christian Groon the General Manager is as friendly and charming as ever. The remodel was beautifully done by Architect, Mark Primack. 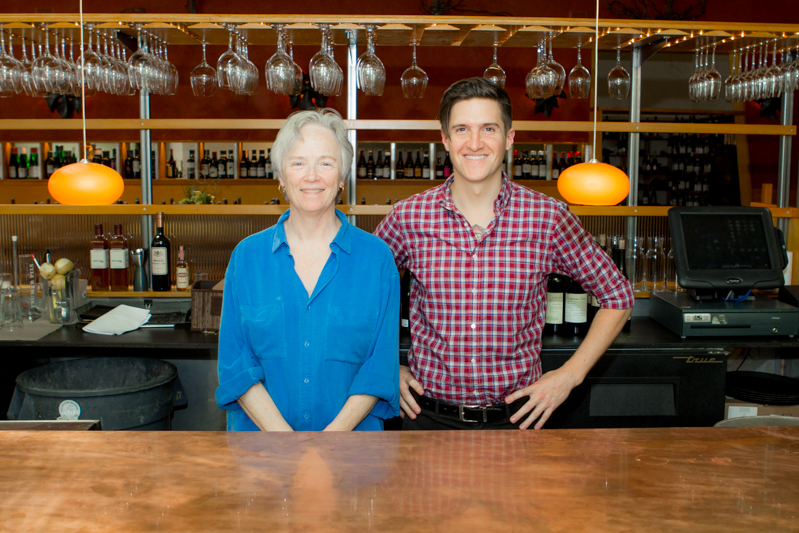 Proprietor, Patrice Boyle and General Manager, Christian Groon behind the new bar. You may recognize they reused the old coper bar top…

New to the menu and added to the seasonally inspired cuisine are prepared proteins. For instance, taking in whole lamb from Don Watson’s Wooly Weeders in Sonoma County to serve Moorish-style lamb meatballs. Enjoy the extensive artisanal wine list,  inspired by Proprietor Patrice Boyle’s philosophy that “wine needs food and food deserves wine”. Soif features Santa Cruz County’s largest selection of hard-to-get wines made primarily by small, family-run domains that employ organic practices, as well as a staff who recommends wines based on taste not points. Plus, Soif’s knowledgeable staff has one goal in mind: To provide the best dining experience to their customers. Soif staff happily share their extensive knowledge to help customers make the best pairings within the food and beverage menu. 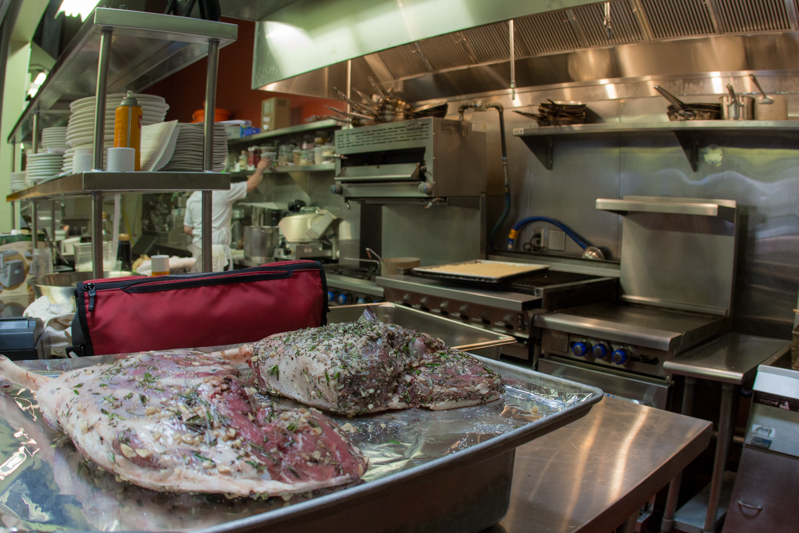 Delicious sustainably grown ingredients from local farms and provisioners in the remodeled and bigger kitchen.

Santa Cruz Waves had the pleasure of taking a tour of the newly renovated Soif. Proprietor, Patrice Boyle answered some questions about Soif and it’s evolution. 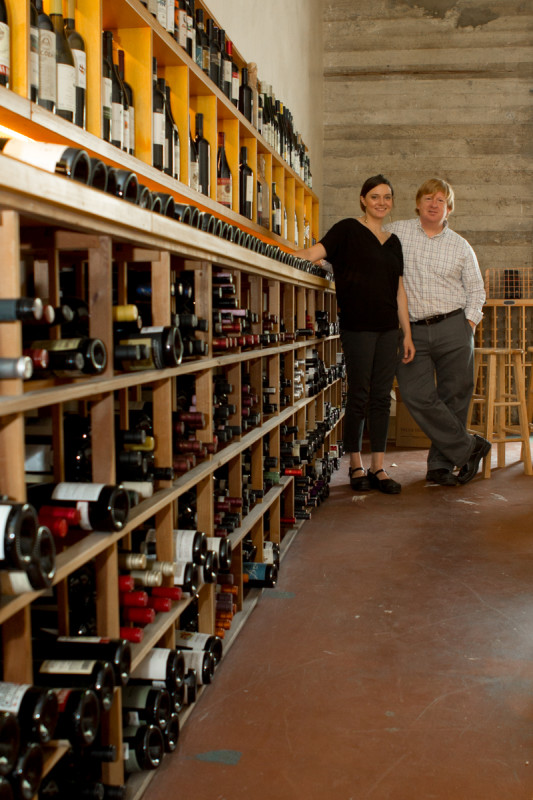 Retail Operations Manager, Alyssa Twelker and Wine Director, John Locke showing the new retail shop. Allowing for an even wider selection of local wines in addition to hard-to-find, and lesser-known wines from around the world with an emphasis on small, family-run domains that employ organic practices.

Santa Cruz Waves: Soif has been a very popular place since 2002. What prompted the renovation and expansion? How much of the original Soif is left?

Soif: “Soif has been open and in operation continuously since 2002, which is an eon in restaurant years. Over time, we had ideas around improving service and being able to do more with the food, so we decided this was a good time to move forward.

While most of the original Soif aesthetic remains, the significant work was in the kitchen, which has been remodeled, and the retail shop, which is the “new space.” The dining room feels more open because the bar seating is now in a separate space that once contained the wine shop and the kitchen is more visible.”

SCW: Please tell us about the trends towards local wines. How will the expansion effect the wine selection?

S: “The new wine shop is beautiful, and we have quite a bit more space, which will allow us to include more local wines in the rotation. We are looking for a beautiful map of the local wine region that can hang on one of the walls. Additionally, we are partnering with the Downtown Association kiosk, to provide information to tourists seeking to visit wineries in the area.

Everyone at Soif is familiar with, and has visited, numerous wineries in the area — I for one came to Santa Cruz as the general manager at Bonny Doon Vineyard and worked for 13 years at what is now the site of Ryan Beauregard’s tasting room and winery. So, Soif staff look forward to guiding people to different tasting rooms, depending upon what they are looking for.”

SCW: What changes are going on in the kitchen? Where did the new menu inspiration come from?

S: “There are many changes in the kitchen — it is pretty much all new equipment. Although we continue to purchase produce at the Farmer’s Markets, in micro quantities to ensure freshness, we added refrigeration, too.

One of my favorite parts of the kitchen is that it is very open to the dining room. Chefs and cooks are happier when they can see their diners eating and enjoying their food, which of course makes sense. We like to cook for people, and the cycle isn’t complete until someone enjoys our food.

The new menu reflects Chef Mark Denham’s experiences of a lifetime in cooking comforting, satisfying dishes. We are serving a lot of fresh items, so the food reflects the incredible bounty of Santa Cruz County. With the addition of a fryer, grill and plancha, we can do so much more.” 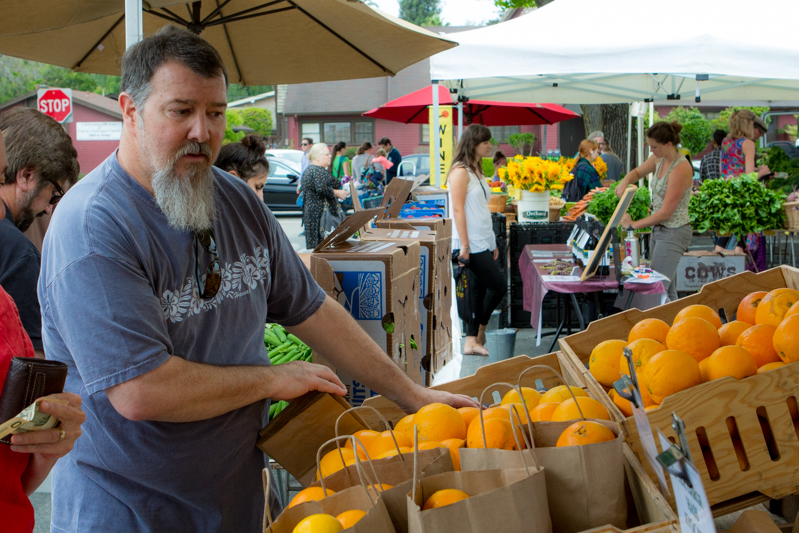 Head Chef, Mark Denham picking out local foods for his kitchen at the Farmers Market just around the corner from Soif.

SCW: Why in, your opinion, has Soif been so successful? What brings people back?

S: “I am really delighted that Soif has been so successful. And I must admit, it was completely unexpected. Many things go into a successful restaurant, and I wouldn’t presume to know those arcane secrets. We have a great staff: I have been super fortunate to have worked with some wonderful, smart, charming and hardworking people who also love wine and good food. I know some long-time clients and wine professionals come for the truly world-class wine list. Our food has always been super. When I opened in 2002, my thought was that I wanted Soif to be Santa Cruz’s living room. Someone is always walking in the door, who we are happy to see. It’s a bit of a party, and it still feels like that 13 years later.”

SCW: What changes and renovations are your favorites? Which new menu items are you most happy with?

S: “I love the openness of the space now — from the visibility into the kitchen, the visibility from the bar into the restaurant, the light that comes into the wine shop. The functional changes make it even cozier than before. As for my favorite new menu item, I love steak+frites. With a glass of delicious red, of course. Nothing is better.” 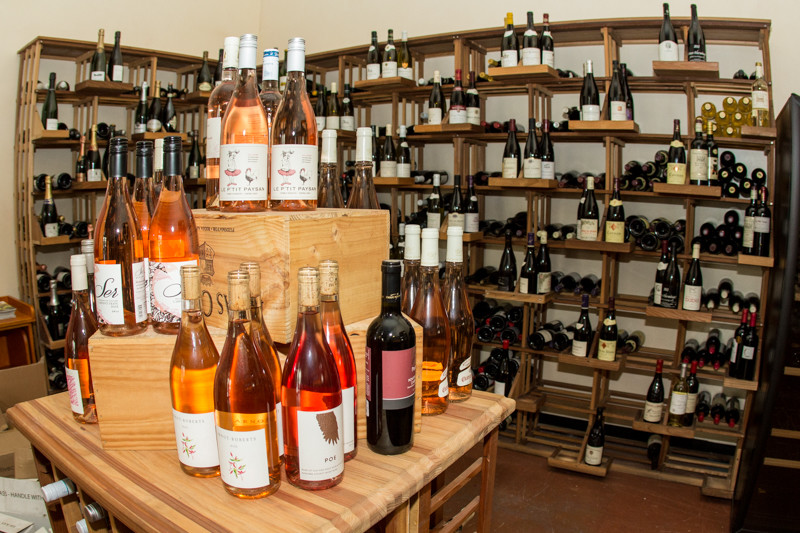 So much more room to look through all the amazing wines!

Visit the renovated and expanded Soif!

I take photos, manage and do admin for Santa Cruz Waves. Event photography is my specialty. I am versatile and will also take nature, landscape, portraits, food, sports, and advertisement shots. I love what I do!

View all posts by Yvonne Falk