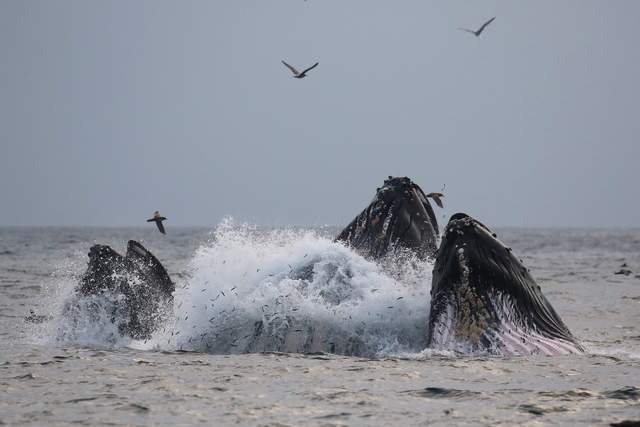 SANTA CRUZ >> More dolphins, humpback whales and fishes, which normally frequent warmer waters, have been swimming in the Monterey Bay.

And now a handful of spiky southern sea urchins rarely seen in the waters off Northern California have joined the party.

Scientists, however, are concerned about the effects of the warming ocean.

“They were found a few hundred meters apart and a few weeks apart,” said Colin Gaylord, a research diver for UC Santa Cruz’s Partnership for Interdisciplinary Studies of Coastal Oceans. “I was surprised to find a second urchin that close in time and space, which could mean they are pretty common now.”

While conducting annual subtidal surveys in near-shore kelp forests near Monterey’s Cannery Row in mid-July, Gaylord said he saw a juvenile sea urchin that could easily be mistaken as a common purple urchin.

But he noticed some striking differences. This urchin was white with dark purple patches. It turned out to be a Lytechinus pictus, also called the painted sea urchin. They’re abundant off the coasts of Southern California and Mexico but very rare in Central California.

Two weeks later, in early August, Gaylord found a second Lytechnius pictus less than half a mile away. That same day, fellow research diver Kenan Chan noticed a different, even more conspicuous urchin. While searching the surface of the rocky reef, he spotted a spiny black urchin called Arbacia stellata — a substantial 225 miles farther north than its last recorded sighting.

They thrive in the Gulf of California, and as far south as Peru and the Galapagos, but El Niño conditions in 1997 and 1998 and currents carrying their larvae brought them reportedly as far north as the Channel Islands off Southern California.

“A lot of species are spilling northward in an area they don’t normally occur in because of warmer temperatures,” said Steve Lonhart, senior scientist with NOAA’s Monterey Bay National Marine Sanctuary. 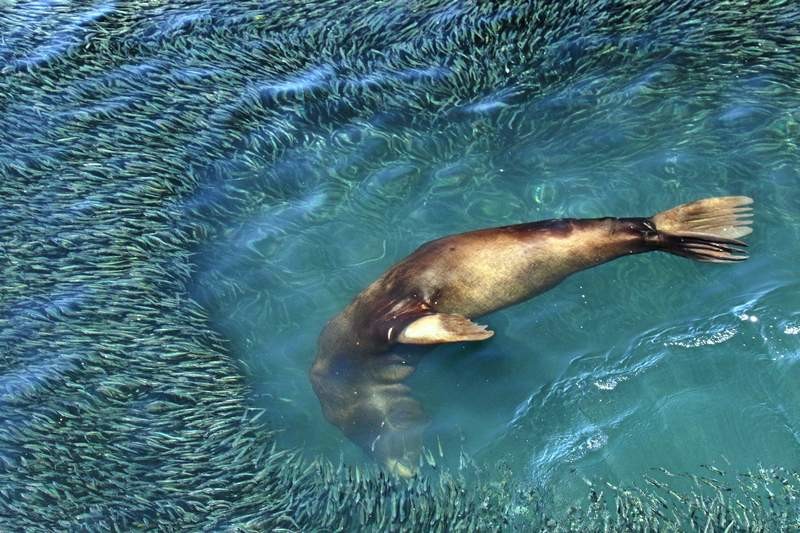 Ocean temperatures are several degrees higher than they have been in decades. Last week, a buoy in Monterey Bay recorded the water temperature at 69 degrees Fahrenheit, the highest reported there. Normal temperatures range from the high 50s and low 60s.

But it isn’t El Niño weather driving the warm-water spike, experts say. Both an irregular patch of warm water in the northern Pacific, dubbed “the Blob,” and a recent lack of winter winds that help upwelling waters churn up cold water from deep have led to the higher temperatures.

“What changes are going to take place and how those changes are going to alter the existing ecosystem, we don’t know,” Lonhart said. “It’s possible that with changes in climate and sustained warming of the ocean, you’ll see species expanding their ranges northward to higher latitudes.”

But one thing is for sure. When the water is warm, it’s full of anchovies and therefore full of whales.

They’ve been diving and lunging in dizzying displays recently, joined by dinner guests for a feeding frenzy.

“The anchovy flee in all directions, the dolphins would come zipping this way and the air would be filled with shearwaters nabbing the fish scared by the whales surfacing,” said local wildlife photographer Jodi Frediani, who frequents the Monterey Bay and has been documenting one of the strangest years on record.

View all posts by JF