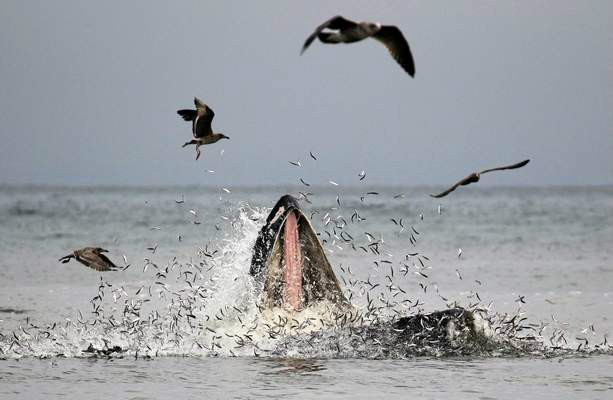 A lone humpback whale put on a show at Mitchell’s Cove Beach Sunday afternoon just before sunset. The humpback cruised back and forth lunge-feeding on anchovies, while birds scrambled for fleeing fish. (Jodi Frediani — Jodi Frediani Photography)

By Dan Haifley, Our Ocean Backyard

As a prerequisite for an upcoming review of its activities and regulations, Monterey Bay National Marine Sanctuary’s staff has completed a “condition report” which paints perhaps its most positive portrait since the 1992 designation of the 6,049-square-mile area. The sanctuary features a deep underwater canyon and spans coastal waters from southern Marin County to northern San Luis Obispo County in addition to the undersea Davidson Seamount 75 miles offshore.

“Once an area depleted of marine mammal populations and key fish populations but now teeming with wildlife, Monterey Bay National Marine Sanctuary has experienced dramatic improvement since its designation in 1992,” Sanctuary Superintendent Paul Michel said in a prepared statement. “Overall, marine habitats and living resources in Monterey Bay National Marine Sanctuary are in good condition, which is the highest rating for condition reports, according to a preliminary evaluation of current trends and pressures facing the sanctuary.”

The analysis, which dozens of experts contributed to or reviewed, has found that populations of many marine mammals, birds and fish are growing, or at least not declining.

Michel said that since designation, sanctuary waters have given up more than a billion pounds of the forage fish species of anchovies, squid and sardines, with 2014 being the best year since 2000.

With a population that just 40 years ago hovered around 1,000 breeding pairs, the Brown pelican spent nearly three decades on the endangered species list, but Michel said that in 2006 there were 11,695 breeding pairs and the pelican was de-listed in 2009.

Michel said the report points out that Monterey Bay’s subspecies of Humpback whale, which migrates as far south as Central America, has a population now healthy enough to be considered for de-listing.

The resident Southern sea otter population has inched upward to 2,944 — scientists consider 3,090 to be sustainable — while their range expands south as they breach the recently lifted legal boundary at Point Conception.

The superintendent also said most beaches have improved water quality — a notable exception being Cowell Beach in Santa Cruz — due to improved sewage treatment and better control of pollution that flows to the sea from storm drains, rivers and wind-driven debris that don’t pass through a sewer.

Marine life and habitats at Davidson Seamount “appear to be in near pristine condition,” while kelp forests and corals are said to be healthy and plentiful.

Michel said the report found some negatives, which lets managers know where work is needed in during the sanctuary’s upcoming management plan review. Marine debris, or junk in the ocean such as plastic, threatens wildlife and habitats, as does a variety of contaminants.
Elkhorn Slough managers must deal with externally forced water quality and upland erosion problems, and climate change drives ocean acidification, which can harm shell-forming organisms and well as tiny, free-floating plankton.

There are impacts from sand mining, human-caused noise, and wildlife disturbance from ocean recreation, a challenge that will require more education about federal rules on observing marine mammals as more people get into the water.

Dan Haifley is executive director of O’Neill Sea Odyssey. He can be reached at dhaifley@oneillseaodyssey.

ABOUT THE AUTHOR
Dan Haifley
Dan Haifley is executive director of O’Neill Sea Odyssey. Reach the author at dhaifley@oneillseaodyssey.org .