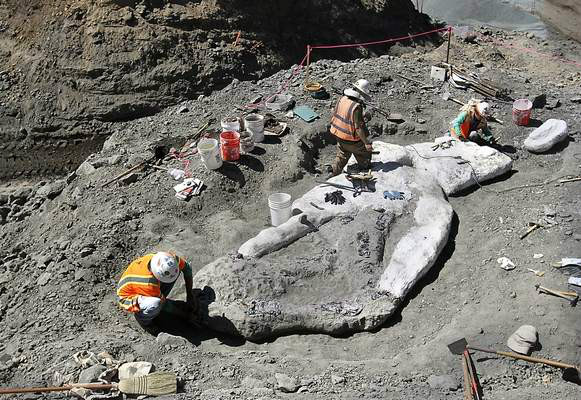 SCOTTS VALLEY >> The past collided with the present in Scotts Valley when scientists discovered a whale fossil, as old as 4 million years, at a housing development site off Santas Village Road.

“On some project sites, if a rock unit is known to have a high potential to produce it, then it’s typically outlined in the planning process and environmental impact report,” he said.

The potential was identified at the Scotts Valley project and a monitor assigned to follow construction vehicles found the fossil, Armstrong said.

Thursday, amid the hum of trucks and backhoes, two paleontologists and an archaeologist, worked to dig out the fossil. Using hoes, shovels, brooms and smaller tools, the group slowly unearthed the artifact. Armstrong said the remains belong to a mysticete whale, an ancestor to the baleen whale. Estimated to be 25 feet long, the fossil is relatively intact, with pieces of the skull, much of the jaw, shoulder blades, arm bones and vertebrae found.

The bones in Scotts Valley made their way into the hills through earthquakes and shifting of tectonic plates, Armstrong said.

“Most places where you see a hill, somewhere there’s a fault line nearby pushing it up,” he said. “They’re relatively inactive faults. But yeah, it’s from lifting thousands, maybe millions of years ago.”

Scientists encased the bones in plaster to preserve the fossil’s integrity and make transport easier. The fossil will travel to Paleo Solutions’ office in Monrovia, in Southern California, where scientists will separate the fossil from the rock.

“If the bone is softer than the rock, it makes it very difficult because it’s hard to chip through the rock without breaking the softer bones, but we’ll get it,” he said.

In 2012, a fossilized skeleton of a small whale was uncovered at the end of 36th Avenue in Pleasure Point. In 2009, whale bones were excavated from the bluffs of East Cliff.

Matthew Clapham, a paleontologist at UC Santa Cruz, said the find is rare because of how intact the bones are.

“I think of the fossils you get along the coastline, it’s more common to get a piece of the skull or the brain case or some bones,” Clapham said. “So this sounds like it’s a very impressive find.”

Those digging in Scotts Valley can often find shark teeth and marine fossils in the dirt, he said. A large vertebrae whale could provide some insight into the evolution of whales.

“That’s an interesting time in whale evolution. A lot of whales were starting to evolve from their early ancestral group so this specimen, depending on how complete it is, could say a lot of interesting things about the evolution of whales,” Clapham said.