Can a pedestrian and bicycle trail coexist in the same corridor with a passenger rail line? The transportation authority says yes, but not everyone is convinced.
By Joel Hersch

After 12 years of debates and planning, the county’s transportation agency is moving full-steam
ahead with plans for a “rail trail” along the 32-mile rail corridor that traverses the county from Davenport to Watsonville.

The Regional Transportation Commission (RTC), which acquired the 135-year-old Santa Cruz Branch Rail Line in 2012, has been crunching numbers and investing in studies on how to develop the strip of land in what they see as the best possible way. At this stage, that’s looking like a passenger rail line that offers public transit—the aim, in part, being to reduce commuter traffic along Highway 1—along with a bike and pedestrian path that runs parallel to the train.

How does the public feel about the rail trail plan? Fairly good, according to a survey released by the RTC in August. Of 2,600 residents polled, 44 percent were “extremely interested” in taking a train to destinations along the Santa Cruz County Branch Line. Twenty-two percent were “slightly” or “not at all,” with 240 of those respondents saying they don’t believe there should be a train whatsoever. Eighty-three percent of survey takers thought that a train service would be a very or somewhat good thing for the county, while nearly 15 percent believed it would have a
negative impact. (View the complete results at sccrtc.org.)

Some concerned locals, however, are not letting the plan proceed without a fight. Miles Reiter, chairman of Driscoll’s in Watsonville and the company’s former CEO, says he believes the county will be making a big mistake by incorporating a passenger rail system into the plan. “We have this spectacular corridor, and an outdoor-oriented community, and [a trail alone] would not only enhance the character of the community, but it would be absolutely extraordinary,” he says.

A chief critique that he and others have is the matter of fitting a train and recreational trail users into the same space—it’s too narrow in places to make sense, Reiter says. The feasibility study for the passenger rail allows for both the train and the bike path to run in tandem, but in some of the narrowest sections of the corridor, the width for the trail is only about eight-feet wide with a two-foot space for pedestrians. 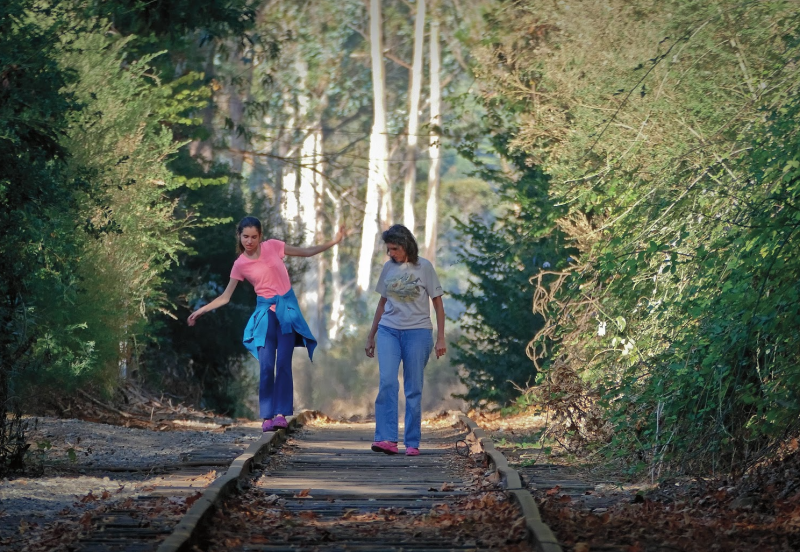 “It’s just too narrow in too many places,” Reiter says. He envisions a trail that is closer to 20 feet wide for bicycles and eight feet for pedestrians, and notes that it would be much cheaper for the county. The cost of adding rail transit service could range between $31.5 million (for a limited version of rail transit with leased passenger cars) and $176 million (the price tag for a train that would run from the Westside of Santa Cruz to Watsonville with brand-new rail cars). According to the RTC draft rail transit study, rail would cost between $4 million and $14 million annually in operational expenses and depending on the number of trains operating per day, the level of service, and how many communities are served. The study says the rail could be up and running in 11 years, depending on public process, though some speculate that it could take up to 30 years and much more than the estimated $176 million.

Trail-only advocates have calculated that a trail without rail would total $68 million initially,
$320,000 annually in maintenance, and be ready for use in about eight years.The RTC is still in the preliminary stages of their analysis and nothing has been finalized, says Karena Pushnik, a senior transportation planner for the RTC. A master plan has been completed that includes both the trail and rail components, because the RTC wants to include three user groups: bicyclists, pedestrians and train riders, the latter of which would have been left out with a plan that excluded the rail line, which will be used for passenger and freight trains.

“We’re moving forward with the goal of preserving this corridor to maximize transportation uses
for the community well into the future,” Pushnik says. The RTC has divided the rail trail corridor into 20 segments, each of which is being developed into trail as the funding becomes available, Pushnik says. Eight total miles, or 25 percent, of the corridor has been funded so far, in sections including from the Santa Cruz Municipal Wharf to Natural Bridges, a 4,000-foot section in Watsonville, and along the North Coast from Wilder Ranch to Panther Beach. The RTC’s Bicycle Advisory Committee submitted a recommendation to the transportation authority that they consider ixnaying the rail portion of the plan, says alternate group member Will Menchine.

“From the perspective of some of the people from the Bicycle Advisory Committee, we felt that
in many ways they put the cart before the horse in commissioning a study that didn’t look at any other options for either transit or the true potential of a bicycle and pedestrian trail without rail,” says Menchine.

He envisions a trail-only plan becoming a beautiful attraction for Santa Cruz County—what he
calls “a linear park”—that would encourage more eco-friendly modes of travel than rail. With rail
involved, he thinks the county would lose out on an opportunity. “This little strip of land manages to run through some of the most beautiful parts of Central California,” Menchine says. “If it has trains running by it and it gets squished down into a narrow little thing, and you can’t get into neighborhoods on either side of the track because it’s literally divided by a fence, that would be a big loss. “This corridor,” he adds, “would be entirely enhanced as a linear park.”

7 comments on “All Aboard? The Rail Trail Debate Continues…”