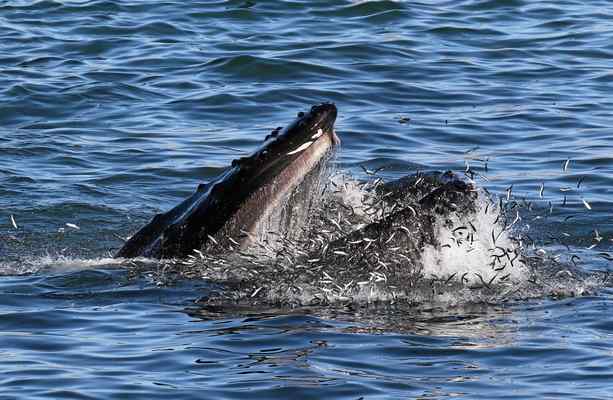 During the summer, humpback whales feeding exceptionally close to shore gave cliff-side spectators some amazing shows, often not much further away than a stone’s throw. There was vertical lunge feeding, whale calves no bigger than a Buick, and even a few tense moments for kayakers getting just a bit too close. There were a string of days when traffic came to a standstill along West Cliff Drive, near Mitchell’s Cove, where passersby were could not help themselves but get out and watch the action. The feeding events may have given the impression that the whales are in better shape than ever, but the nearshore activity might have to do with their need to search more aggressively than ever for their food—in this case, anchovies. According to an article in the Santa Cruz Sentinel on Thursday, Oct. 29, researchers suspect that the anchovy population has recently collapsed due to certain environmental conditions, which was causing whales to forage closer to shore than normal. One  recent study explains that anchovy populations rise and fall, and that the fishing industry’s take could be to large to allow the tiny fish to sustain themselves. Another new study by the Farallon Institute suggests that the number of adult anchovies that can reproduce has declined more than 99 percent between 2005 and 2009.

“Right now we’re seeing that the whales are more scattered and seem to be looking harder for food,” says Dorris Welch, a marine biologist and co-owner of Sanctuary Cruises in Santa Cruz. “I think the regulatory agencies should be taking a close look at the anchovy harvest and limits.”

The Pacific Fishery Management Council will consider the anchovy’s status at its meeting next month.