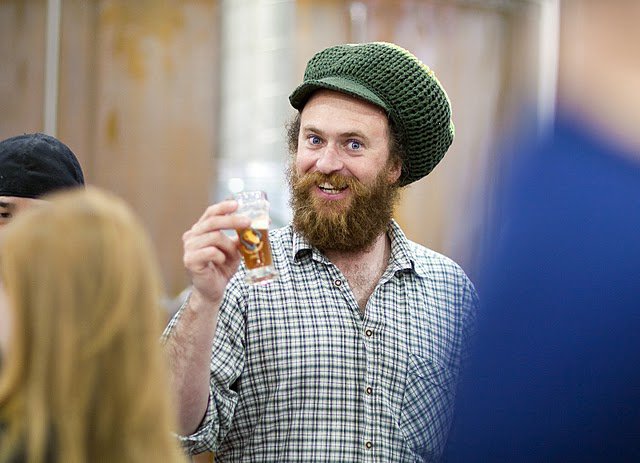 New Bohemia Brewing Co (NuBo) won the bronze medal in the German-Style Wheat Ale category this past Saturday at the 2015 Great American Beer Festival ® (GABF®) in Denver, CO. After being open for only six months, brewmaster Dan Satterthwaite was the only brewer in Santa Cruz county to win an award this year.

GABF® is the largest craft brewing industry event and beer competition in the United States. This year’s event involved 1,532 breweries, with 6,738 beers entered in competition–20% more entries than in any previous year, making this the most competitive event on record. With 275 medals awarded across 90 beer categories, only 4% of beers in competition received medals this year.

The winning beer, Monkey Business, is a dark hefeweizen made with 50% dark wheat malt and a traditional Bavarian yeast strain. The bright and full malt body offers a nutty flavor, complemented with aromas of banana and clove. It is a favorite style at beer gardens throughout Germany, but it can be difficult to find a fresh example locally.
NuBo specializes in European-style lagers and ales, using imported ingredients and traditional European brewing methods to craft exceptionally balanced beers. While most small breweries today focus on English and American styles, NuBo specializes in traditional and innovative craft lagers and Bavarian hefeweizens. This includes the On Point (Czech Lager), Velvet Revolution (Vienna Lager) and Highway to Hefe (Hefeweizen). In its first six months, however, NuBo has brewed no less than 25 different beer styles, including a Chocolate Porter, Honey Bock, Red IPA, Cherry Stout, and a Double Pale Ale, to name a few.

NuBo aims to be ‘a Santa Cruz original, inspired by the traditional.’ Located in the neighborhood of Pleasure Point on 41st Ave, NuBo is celebrating Oktoberfest each Sunday in October and is serving new beers on tap almost every week. We are beginning to distribute locally, so look for our beers on tap at your favorite restaurant or bar.
Find out more about our brewery and upcoming events that include live music, trivia night, happy hours and seasonal events on our website at www.nubobrew.com, or just stop by on 41st Avenue.