Fluorescent wetsuits, webbed paddling gloves, hardcore territorialism, eccentric characters … The 1980s were a special era here in Santa Cruz. The invention of the modern, three-fin thruster design by Australian shaper Simon Anderson ushered in a new era of progression, and Santa Cruz surfers were at the forefront of this innovative new approach. Meanwhile, locals like Kevin Reed and Steve Price were pioneering aerial surfing, while guys like Richard Schmidt pushed the big-wave envelope both at home and in Hawaii. It was an era when lineups were heavily localized, enforced by a rigid pecking order that ensured the groms got the scraps and the top dogs got the pick of the litter. Waves recently unearthed some archival slides of five Santa Cruz surfers back in the day and asked them to take us on a walk down memory lane. 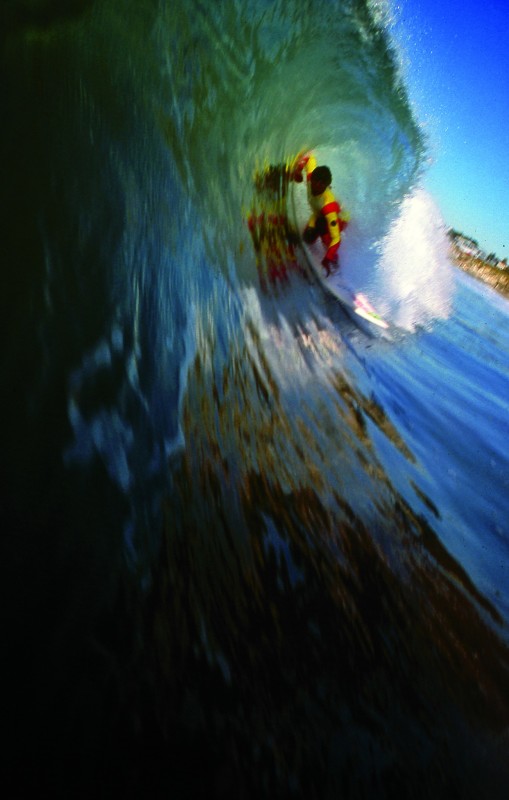 “It was a pretty amazing, memorable, and often humbling time to be a surfer in Santa Cruz back in the ’80s. Back in those days the crowds were a mere fraction of what they are today and the lineups were generally ruled by short boarders in tight-knit packs who would vibe and often heckle anyone they didn’t know or like that paddled into the bowl or got in the way. There was a far more localized and often hostile vibe at nearly every spot across town—East, Midtown, or West—with a solid totem pole of characters at each spot, and it would take years to work your way up the totem pole at a given spot and in the pole position in the bowl. Nowadays, respect, etiquette in the lineup, and the idea of a totem pole seems like a thing of the past; it’s become a free for all at every spot. Beginners on Wavestorms, longboarders, and standup paddleboarders have taken over the lineups, outnumbering the endangered species of the shortboard pack rats. I miss those days—the days of discovering the surf was pumping after riding my bike down with my board to surf after school, not from an online forecast a week in advance; the days of small, tight-knit crowds of friends in the bowl at First Peak or Sewers, heckling and pushing each other.” 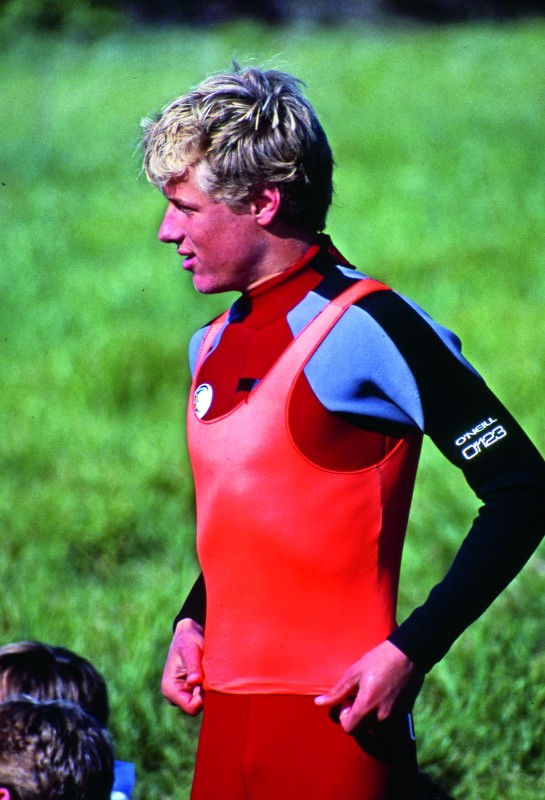 “This photo represents my focus during the ’80s. I was surfing a contest every weekend back when this picture was taken. I made a lot of good friends up and down the coast of California during this era. This was around the time I stepped into my current career as a sales rep, so I’m really appreciative for all these experiences. Surfing in the ’80s was super fun. Innovation was in the air and there was intense localism. We went from riding single fins to twin fins in the matter of three years. Then thrusters came in and changed the game forever. Power surfing became my primary focus. We also started to explore more, venturing up north more, finding new spots to avoid the increasingly crowded lineups.”

“Santa Cruz … what a great place to grow up as a surfer! Surfing is a lifestyle in Santa Cruz, although it’s a bit different now than it was then. When I was growing up, if someone was out of line, the older locals would clear the lineup. As a young local grom living on Pleasure Point, this was awesome, but also intimidating. That’s just how it was back then. Getting my introduction to surfing the Point in the mid ’80s was really special to me—there were so many great surfers on any given day that it was a privilege to be able to be out there. The older boys wouldn’t let me surf First Peak for years, so I started sitting on Suicide Bowl so I could watch them getting these radical lefts. Then, one day, the boys let me come over and surf the Peak with them. For me, a 16-year-old grom, surfing the Peak with all of the Point boys was the greatest feeling—hands down the most awesome day at my life up to that point. Much respect to all of my elders: I thank [them] all for taking me in and showing me the ropes.” 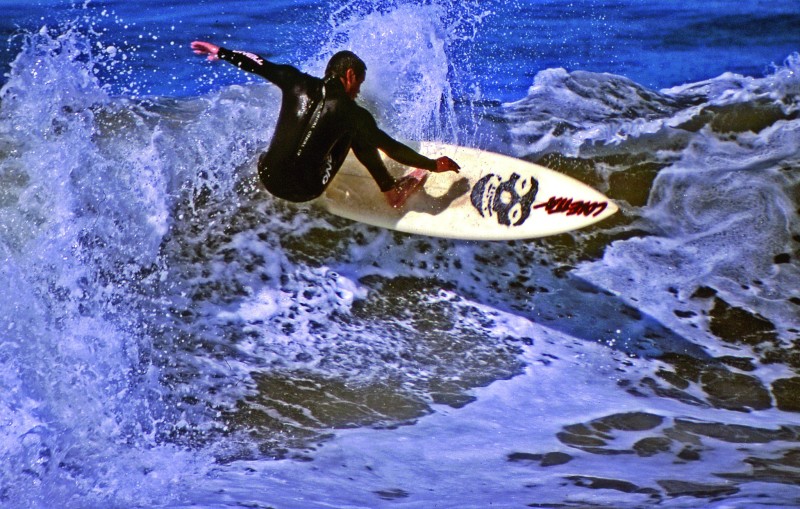 “Well, first off, I’m sure everyone thinks that their youth or a certain decade was better than another. Now that I’m older, I can see the point of view. For instance, when I worked for Jim Phillips back in the mid to late ’80s, I asked him why he wasn’t surfing much anymore. He replied, ‘Why, so I can surf with all you knuckleheads?’ I didn’t understand what he was saying until later on in life when everything in the lineup was changing for me and my generation.
For me, the ’80s were a golden era. We still had tons of respect for the older guys that forged the way, we learned the old-school etiquette—the unwritten laws of the lineup—the equipment was improving, and there was a new statement being made. Rail-to-rail surfing, going straight up into the lip, and the aerial movement was taking off. I was a skater who learned to surf, so I appreciated this progressive movement. I also remember it taking years to work your way up in the lineup to get the set waves, even just to move from one surf spot to the next. We never expected to get the best waves of the set; those were awarded to the guys that had already paid their dues. Back then the locals outnumbered the invaders and held their spots tight. I feel fortunate to have been brought up surfing in that era, pre surf cams, pre cell phones, pre surf schools and pre industry blowout.” 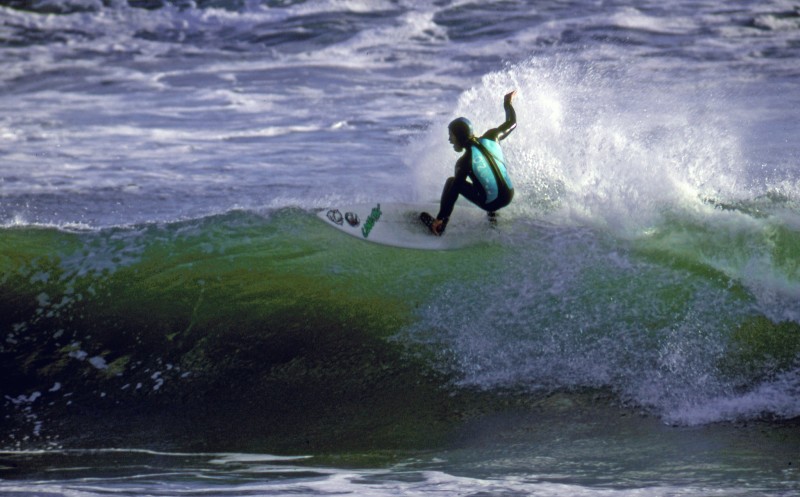 “Change is a constant. The ’80s didn’t escape change. Boards went from boats to glass slippers, clear to disco fluorescent, then back to clear. Fins went from single fins to twins to thrusters. Surf reports transitioned from the ‘squawk box’ to the SurfFax and then Surfline. Crowds went from manageable to anarchy. The Rivermouth had a once-in-lifetime sandbar winter of ’82-’83. The Eastside didn’t have a seawall. The ‘trail’ to the Point was a muddy mess. The ‘trail’ to The Hook was the roots of trees. Once a year we all surfed in the St Patrick’s Day “Yeah Now!” contest, a no-cord event for Santa Cruz locals. Groms were strapped to telephone poles with their cords as the local crew accepted them into the tribe. In ’85 [Anthony] Ruffo won the first [O’Neill] Coldwater Classic, part of the Professional Surfing Association of America Tour. The Coldwater ran three years as a Championship Tour event. Richie Collins won in ’87, Martin Potter in ’89, and Tom Curren in ’90. The surf industry evolved from mom-and-pop shops to the ‘Surfing Industrial Complex.’ At the start of the decade, all you needed to surf was a board and a wetsuit. By the end of the decade, did we really need all those accessories to surf?”

4 comments on “Remember When… the ’80s flashback edition”