Relive one woman’s solo surf trip from Costa Rica to California. This is Part 15 of a series featured in Santa Cruz Waves during the summer of 2016.

Over the course of millennia, two volcanoes sprouted an island that spans 107 square miles in the middle of the largest lake in Central America.

When the waves went flat, I headed for Ometepe, an volcanically active island in the middle of Lake Nicaragua. Rich in culture, history, and raw natural beauty, the island contains two volcanos, Conception and Maderas.

Stephanie, another solo traveler, was game to go exploring. Alex, a local restauranteur, offered to take us in his truck, seizing a rare opportunity to take a mini-vacation with two women.

We bought our ferry tickets in San Jorge, watching as the water trucks drove directly into Lake Nicaragua to fill up their tanks with salty sweet water which the locals call agua dulce. A horse rolled in the sand, its legs crudely tied together to prevent it from straying too far, too fast. 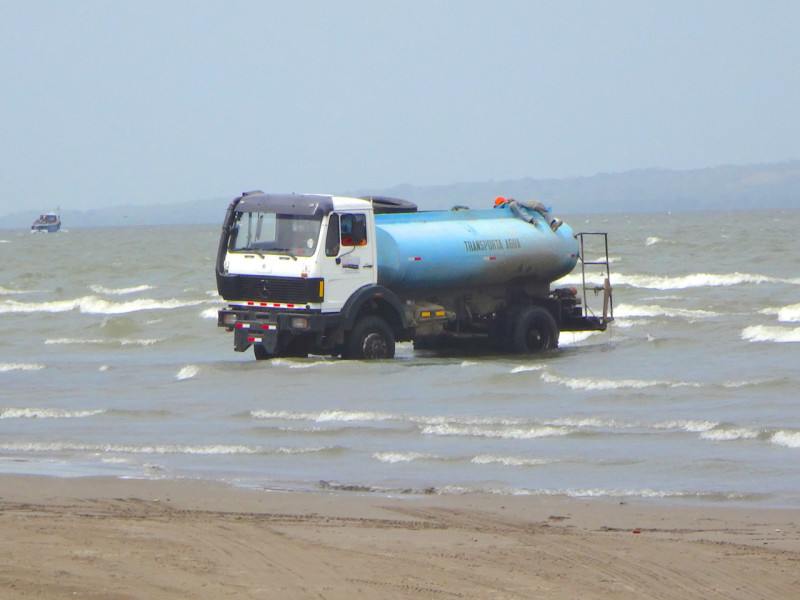 Water trucks drove directly into Lake Nicaragua to fill up their tanks with salty sweet water which the locals call agua dulce.

The animals in Nicaragua are not pampered or coddled. Indeed, they are rarely fed. Like their owners, they scavenge the land for what they can and endure numerous hardships – hunger, parasites, sores, discomfort and pain.

I reached to pet a dog, oblivious to the fact that it was missing half of its face, its jawbone and teeth exposed like a zombie, back from the dead. A woman called out to me, “Amiga no!” When I looked down and saw its rotted lips pulled back into a gruesome smile, I felt a strange mix of disgust and reverence, amazed that it could eat, that it was still alive, in such condition. 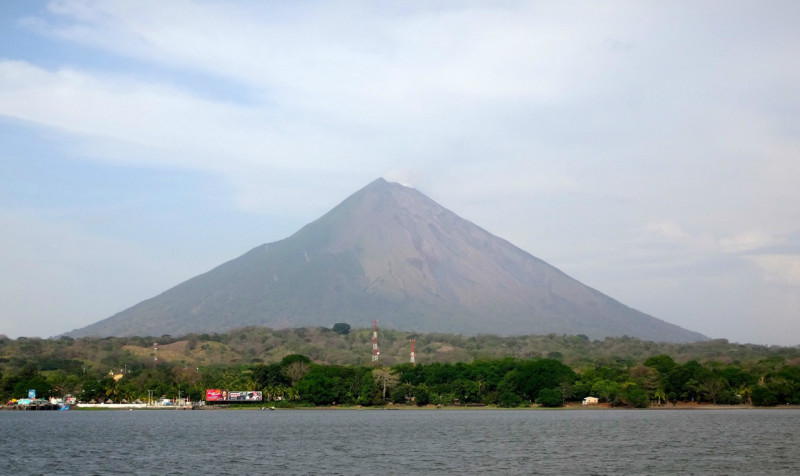 The volcanos towered above the lake, their peaks engulfed by rings of gray white clouds. As we approached Conception on the ferry, I began to grasp the scope of its size. Literally a mile high, and still volcanically active, Conception last erupted in 2010. Over the course of millennia, Conception and Maderas sprouted an island that spans 107 square miles in the middle of the largest lake in Central America. Ometepe was a sight to behold.

Alex had been to Ometepe several times, and lucky for us, knew his way around. He suggested that we stay at an old coffee plantation at the base of Maderas. The rustic structure was originally built in the 1800s and later converted to a historic hostel. Ever the restaurateur, Alex brought us coffee with sugar and milk on a tray each morning, pressing steaming mugs into our sleepy fingers as we pulled the mosquito nets back from our beds and listened to howler monkeys calling out from the mango trees. 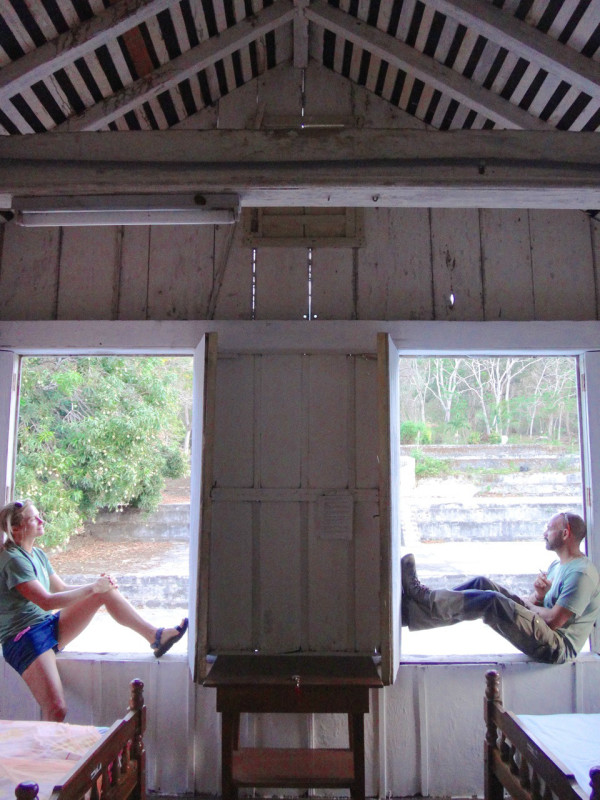 The rustic structure was originally built in the 1800s and later converted to a historic hostel.

We hiked to a waterfall, swam in natural spring water, suffered through plagues of insects. At one restaurant, the gnats were so abundant and aggressive, they flew into our ears, crawled across our menus as we struggled to read them, fanning incessantly to clear our fields of view. As I began to suggest that we look for another place, I inhaled a mouthful of bugs and choked. We laughed ourselves to tears, all the way to the other restaurant. I may have laughed as much in those three days with Alex and Stephanie as I have in my entire life.

One night we spied a forest of twinkling lights and pulled over for a closer look.
Thousands of fireflies danced magically in the trees, twirled across the ground at our feet. Entranced, we pursued them, trying to lure them into our hands. We gave in to the child buried within each of us, delighted by the tiny tinker bells.

As we drove around Ometepe, I was struck by the lack of infrastructure. Domestic animals – pigs, cows, chickens, horses, dogs, cats – roamed freely through the countryside. No roads were paved, horses and carts were as common a form of transportation as cars. Houses were built from scraps, a piece of signage repurposed as a roof on an adjacent habitation.

As I looked more closely, I began to notice marks of perseverance and resourcefulness. Homemade saddles and bridles fashioned from wood and rope. A cart, perched on the base of an old truck axel with rubber tires still attached, the bed constructed of scrap wood and crudely hewn branches. 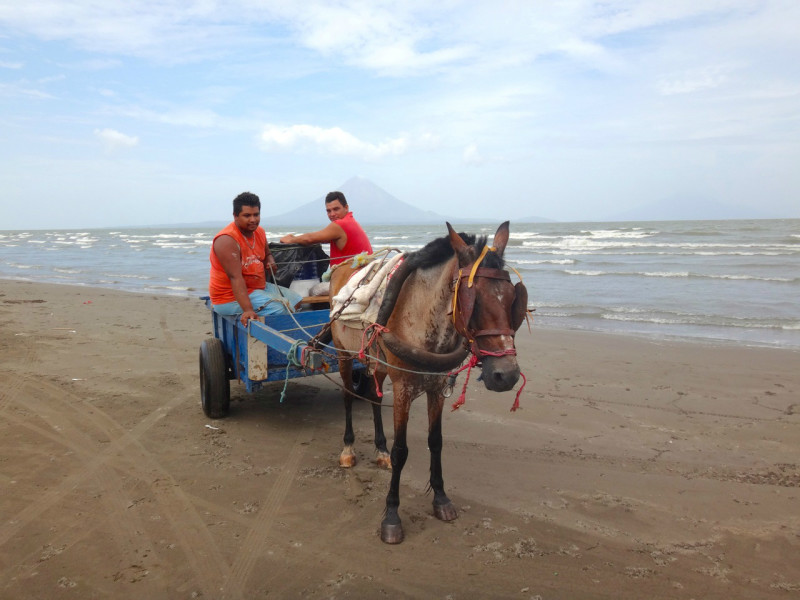 Horses and carts were as common a form of transportation as cars.

A special, glowing admiration throbbed within me as I took in the tenacity, the persistence, the ingenuity of the Nicaraguan people. They see endless potential in the pieces of a dead truck, in roadside debris, in things I would call garbage, things I would cast away. Our waste, our trash, is truly their treasure.

These people hold the power of creation in their calloused hands. They take what others have deemed useless and ugly, and make something functional, something inherently beautiful in its brazen existence. Buried beneath layers of hapless circumstances, the human spirit boils hot as lava, and creates an island in the middle of a lake. 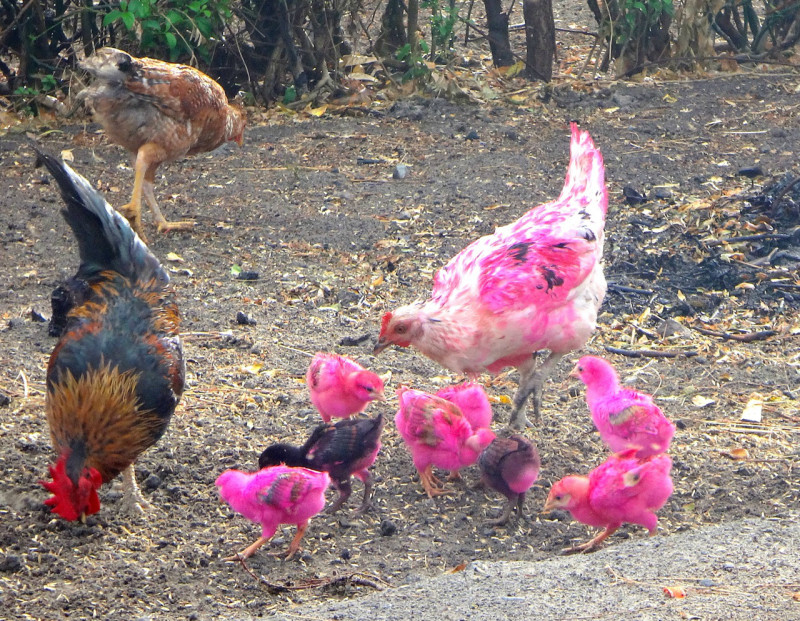 I’m not sure why these chickens were pink..