Relive one woman’s solo surf trip from Costa Rica to California. This is Part 14 of a series featured in Santa Cruz Waves during the summer of 2016.

The author, finding a fun one amidst the crowd.

The small coastal village in Nicaragua was abuzz, the news propagating from hostel to hostel. It travelled like a current through electric wires, amplifying everyone in its path. Chicas.

A group of surfer girls had arrived; it was the talk of the town. I followed the hum of gossip to a group of four women lounging in hammocks up the street. It was there that I met Celia and Lucía, from Spain; Loretto, from Chile; and Maria Elena, from Italy. We struck up a friendly conversation, and found a common thread amongst our medley of languages: English, Spanish, and Italian. Through patience, translation, and laughter, we discovered a flavor of communication in which we all tasted a bit of an unfamiliar language, and delighted in learning something new. 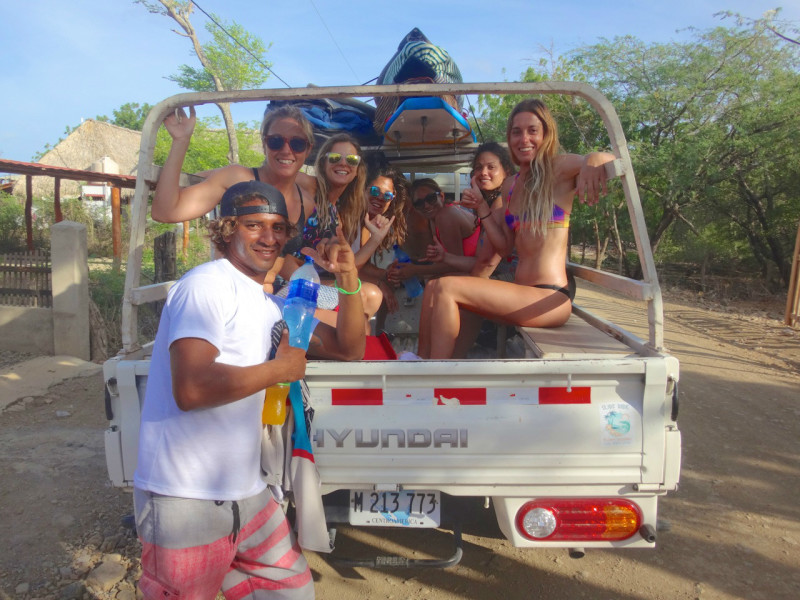 The next day, we loaded into the back of a pickup truck with our boards strapped to the roof.

In a matter of minutes, I was invited on an all-girl surfing excursion, planned for the following day. My new friends had already arranged for land transportation, a boat to take us to a remote surf spot, and a water photographer to record the experience. Of course, I was in.

The next day, we loaded into the back of a pickup truck with our boards strapped to the roof, along with a few others who had been invited to tag along on the adventure. Bouncing over miles of dirt roads, we finally pulled up to a tiny village where the boats on the beach outnumbered the people.

We boarded a boat and motored out into the turquoise sea, headed toward a point of land stretching out to the north. Passing coastal shrub and tall hazel cliffs, we rounded the point and the boat began to slow. I could see the back of a beautiful wave breaking in front of us, the spray blowing gently in the wind as it rolled toward shore. 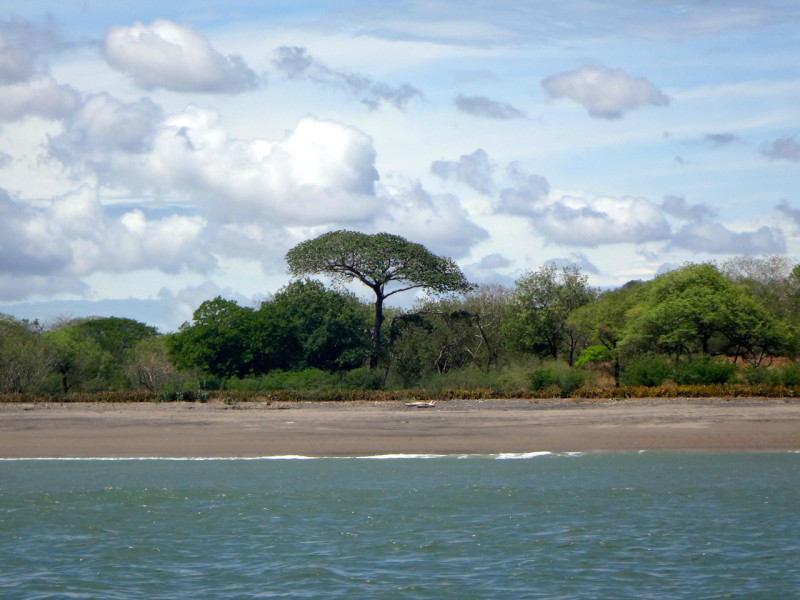 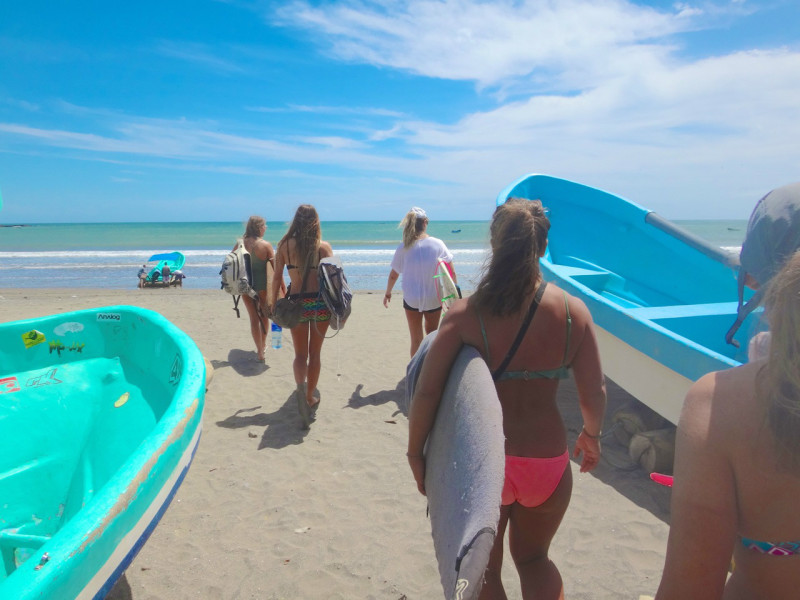 We boarded a boat and motored out into the turquoise sea.

Grabbing our boards, we jumped off of the boat, and paddled through the warm water toward the waves. Despite the remote location, we were not alone. There were lots of surfers, and none of them were women, other than our group. With a substantial crowd, and a limited number of waves, we faced a lot of competition.

The waves were well worth the effort though – long, chest high lefts that let you in easily, the wide open face continuing to deliver small burst of speed even as it diminished in size. As the wave wrapped into the bay, section after section stood up on the inside sand bar, rarely closing out. It had the effortless skatepark quality of the Hook, only in reverse; its mirror image, a matching crowd in the reflection.

The waves were well worth the effort.

Our group banded together, encouraging each other into waves. Despite the crowded conditions, we began to relax into a rhythm, taking turns. However, there were still a few guys who persisted in paddling around us, over and over again. Finally, Loretto had had enough. She had been waiting for a long time. As the same guy paddled around her yet again, she smiled mischievously, went for a wave, and didn’t look back, intentionally dropping in on him.

Worried that the guy might get mad, I watched nervously to see what would happen. At first, he had a scowl on his face, but amidst our laughter, it softened into a smile. I could see that he wasn’t going to pick a fight with a posse of women. 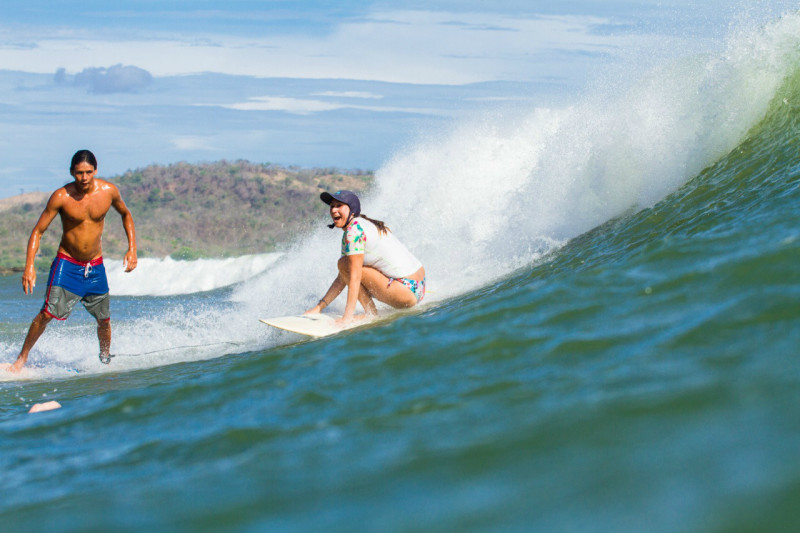 Lucia, putting on her game face.

Back out at the boats, the guys dropped their aggressiveness and turned on the charm. “Come hang out,” they cajoled. “Have a beer!” The frosty bottles of Toña nestled in coolers of ice were irresistible under the incessant burn of the tropical sun. We made peace amidst the sound of popping bottle caps and glass clanking.

And there was something else too, aside from cold beer in hot sun, that made it an easy concession – the simple acknowledgement of a desire to be with other people. There’s a paradox to being alone. As surfers, solitude is something we all desire in principle. (Who doesn’t want empty waves all to themselves?) But in practice, we find every excuse to avoid it. Is it really the imminent danger of surfing that makes us invite a friend or gravitate towards a group? Or do Christopher McCandless’s words – happiness is only real when shared – ring true for many of us?

I’ve had some amazing sessions surfing alone, but they are the hardest to hold onto. I remember the highly concentrated sensation of joy, but the memories of everything else – especially of the waves themselves – fade quickly. In contrast, sessions I’ve shared are as accessible to me as the present moment. This day in particular – with a fun group of girls and some guys that didn’t turn out to be so bad after all – was one of my favorites. 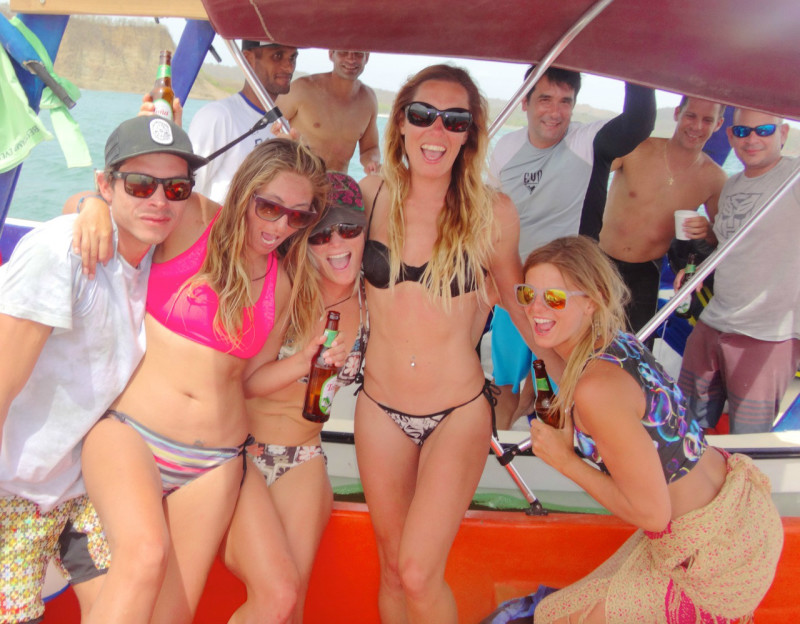 We made peace amidst the sound of popping bottle caps and glass clanking.