Relive one woman’s solo surf trip from Costa Rica to California. This is Part 12 of a series featured in Santa Cruz Waves during the summer of 2016. 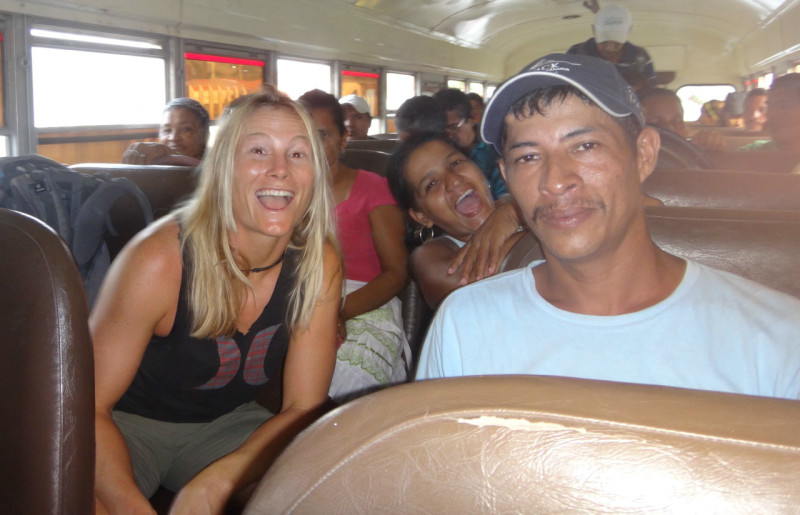 Aloe on the bus after passing through La Frontera.

May 15, 2015 marked my first overland border crossing, from Costa Rica into Nicaragua, via a bus bound from Liberia to La Frontera, the Nicaraguan border. After traveling for six weeks, I was immersed in the ebb and flow of my immediate surroundings, with little thought for what lay ahead. A planner at heart, I unconsciously conceded to taking things as they came. Though I entertained mild thoughts about what I would do next, my schemes were pliable, yielding and bending easily to whatever circumstances reared up before me.

So as I stepped off of the bus at La Frontera, figuring it would be just another link in the chain on my journey, I was unprepared for the bombardment of people anxious to sell things, get me a taxi, process my exit tax, and change money. Stupidly, I had stocked up on the local Costa Rican currency, colones, just the day before, and didn’t know the exchange rate for Nicaraguan cordobas. I fought off the money changers at the border, wary of getting a bad deal, and dragged my board bag about a quarter mile down the dirt road to the Nicaragua border. 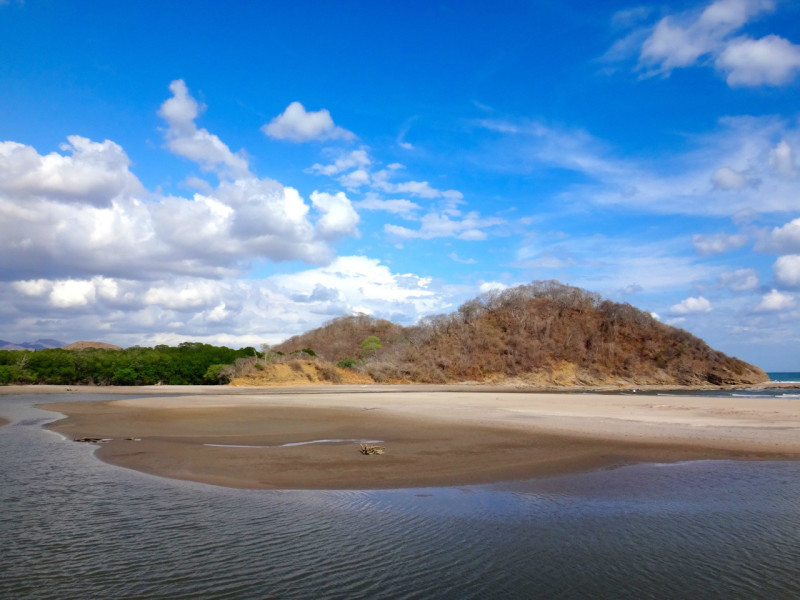 The beachfront town of Popoyo was my intended destination.

After passing through several processing stations, I reached the last stop, customs, where I had to pay an entry fee. Only US dollars or Nicaraguan cordobas were accepted, and all I had was colones. The customs officer kindly explained where I could find bank and keenly observed the difficulty in taking my gargantuan board bag with me. He agreed to keep an eye on it for me while I went to the bank.

In my current state – tired, hungry, and delirious with a mild case of food poisoning – the clean, air-conditioned bank was an oasis of comfort and order, reminiscent of home. I handed the teller my crumpled wad of cash and waited patiently while she counted it. “108,000 colones,” she announced. “There is more than that, isn’t there?” I asked in surprise. I hadn’t bothered to count the money before I handed it to her, and it seemed short of what I had anticipated. She rolled her eyes at me, annoyed, and counted again, out loud, in a condescending tone. I saw 100,000 go by, and then, wasn’t that a 10,000 note? 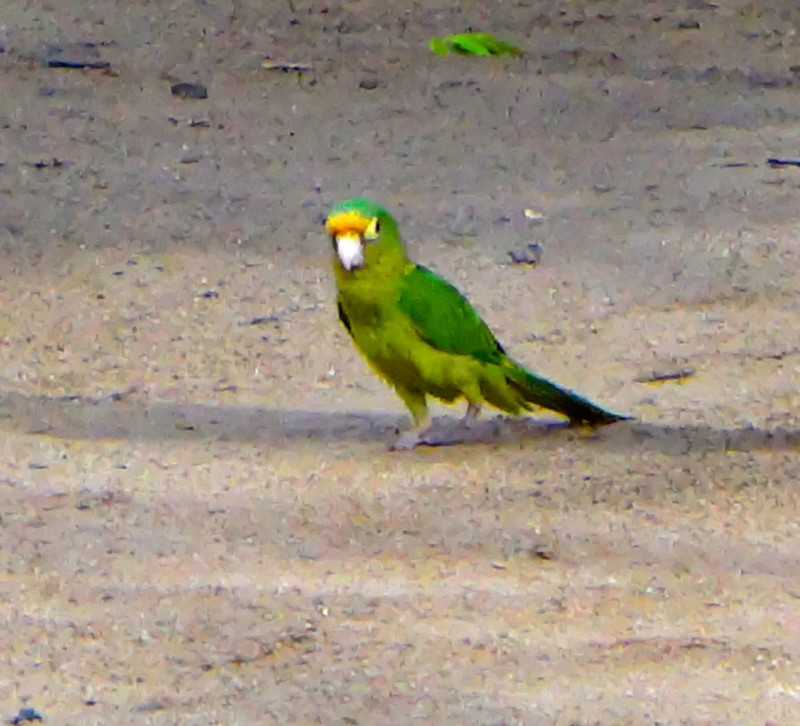 I fumbled for the right words in Spanish. The wrong ones dribbled out as I tried, stupidly, to protest. The line was growing behind me, the teller was visibly exasperated. And I was tired, hungry, sick, and delirious. I couldn’t think. Maybe I was wrong. I was in a bank, for god’s sake. I backed off, accepted the cordobas, and went on my way. But later on, this concession irked me. Adding up my expenses since the previous night, it was unequivocal – the teller had miscounted. Luckily, it only equated to a loss of about $20, a fair price for a lesson learned: Use up your cash before crossing the border, carry dollars if possible, find out the exchange rate ahead of time, and trust the border guys (their rate turned out to be equivalent to the bank’s).

Returning to customs, I paid my entry tax and officially crossed into Nicaragua, where again, I faced a bombardment of people who desperately wanted to sell me on a taxi. I insisted on taking a bus, having discerned that I could save money by taking a bus to a town called Rivas and then a taxi to Popoyo. Someone finally ushered me toward a dilapidated bus, wrenching my bag from my hands and loading it into the back. A circle of men surrounded me. “You need to pay him,” someone said, gesturing toward a disheveled looking young man. I had the weird feeling that I was being conned into giving bus fare to a crook, and apprehensively asked if he was the bus driver. “Claro,” the circle of men confirmed, becoming more insistent. I gave up and handed him the money, feeling a little ridiculous as the sum I was guarding so protectively amounted to about a dollar. 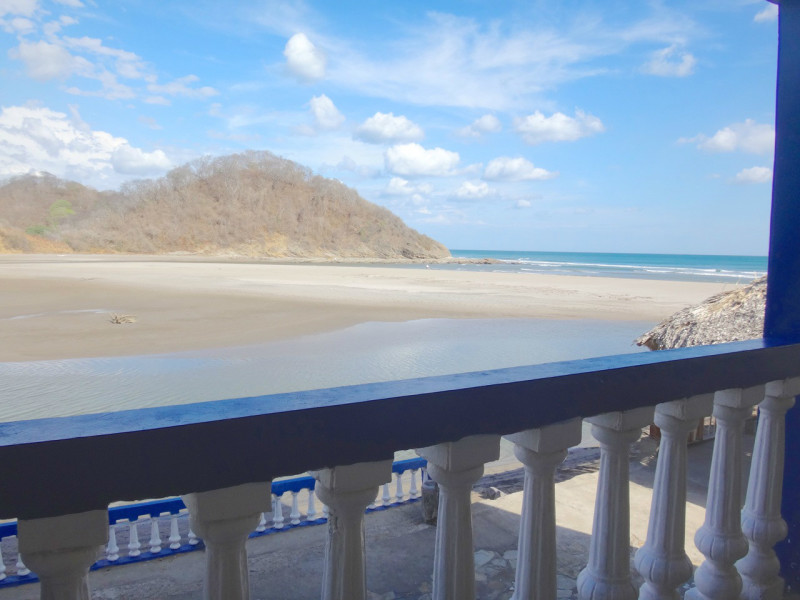 By nightfall, I was settled in at the Tiltin’ Hilton, a towering hotel on the verge of falling into the river.

When I stepped onto the bus, I saw smiling faces, a surfboard, and another traveler I had met on the bus in Liberia. The disheveled man to whom I had handed my money got behind the wheel. Clearly, I have a lot to learn about who to trust. I don’t know if it was instinct or reason speaking to me, whatever it is, it needs some tuning. Luke, the owner of the other surfboard, was also going to Popoyo, so we decided to share a taxi from Rivas.

By nightfall, I was settled in at a towering hotel on the verge of falling into the river which poured into the beach at Popoyo. Luke referred to it as “The Tiltin’ Hilton” and said it was where I would find the best rate. He planned to stay elsewhere, citing that the Tiltin’ Hilton was seedy. 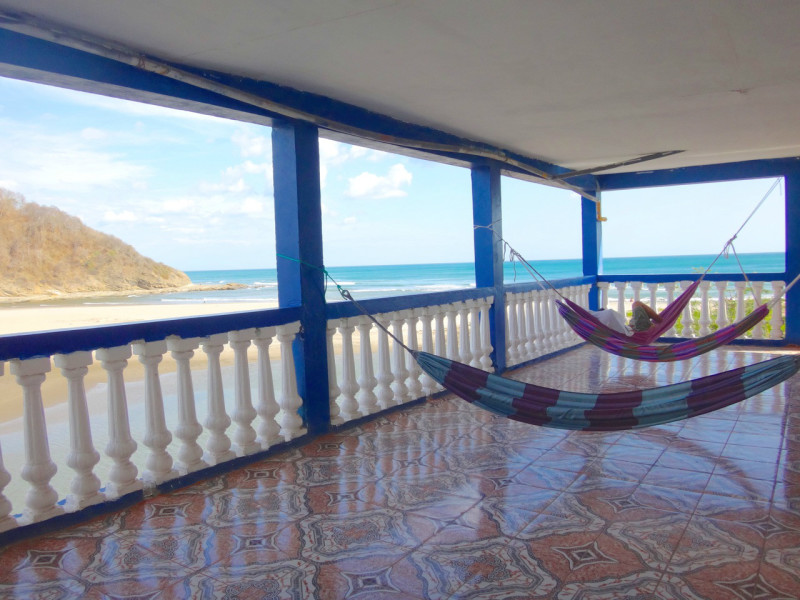 The hotel manager declared his intent to take me as his lover before we reached the second flight of stairs.

From the moment the taxi dropped me off in front of the crumbling structure with peeling paint, I could see precisely what he meant. A man – a large boy, really – with wild hair and bright, rasta colored board shorts stumbled drunkenly toward me, gesturing at my board bag. “I surf,” he slurred. “I’m sponsored.” I was unimpressed. He moved in closer, grabbing at me, until I finally kicked him, at which point his lust switched to malignity. “I don’t love you anymore,” he announced. “You look like a man anyway, in your cargo shorts.”

The hotel manager intervened. A stadium of gold teeth flashed as he smiled at me, a thick bramble of hair spilling over the top of his white shirt as an ample round gut threatened to burst the bottom buttons. “Get out of here,” he said to my resentful suitor. He then proceeded to show me to my room. The hotel manager declared his intent to take me as his lover before we reached the second flight of stairs. I politely declined, hoping that the lock on my door would prove more effective than it looked at warding off unwanted advances. 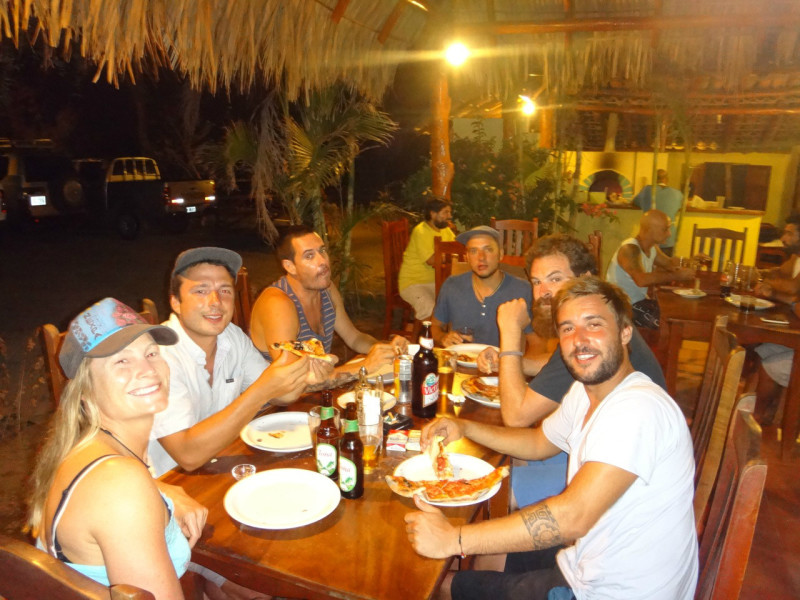