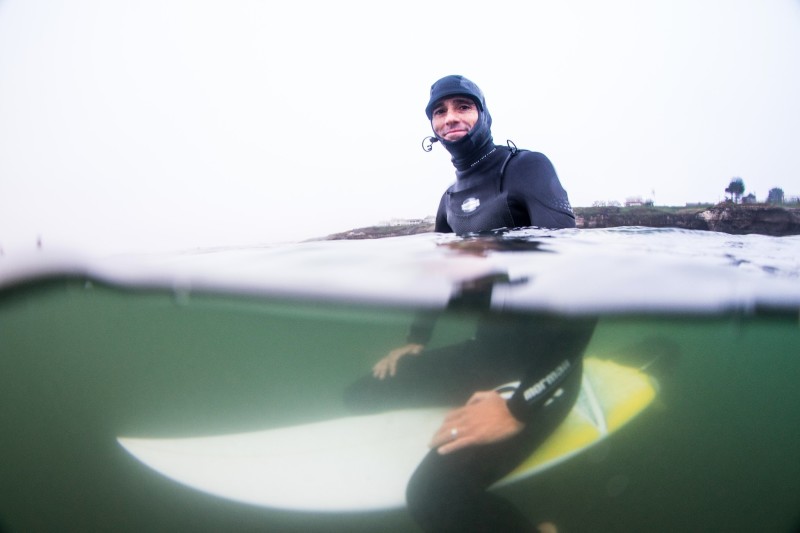 “It was crazy at first,” says Gioranelli. “I couldn’t speak [English] … Spanish usually got me by. Brazilians are like Italians—we are very loud and expressive, so it was hard getting used to how mellow everyone is here.”

Like everything else, the local surf scene seemed impossibly foreign. The rigid surf hierarchy was a far cry from the chaotic lineups back home, and this was made all the more difficult to navigate by Santa Cruz’s notorious resistance to outsiders. 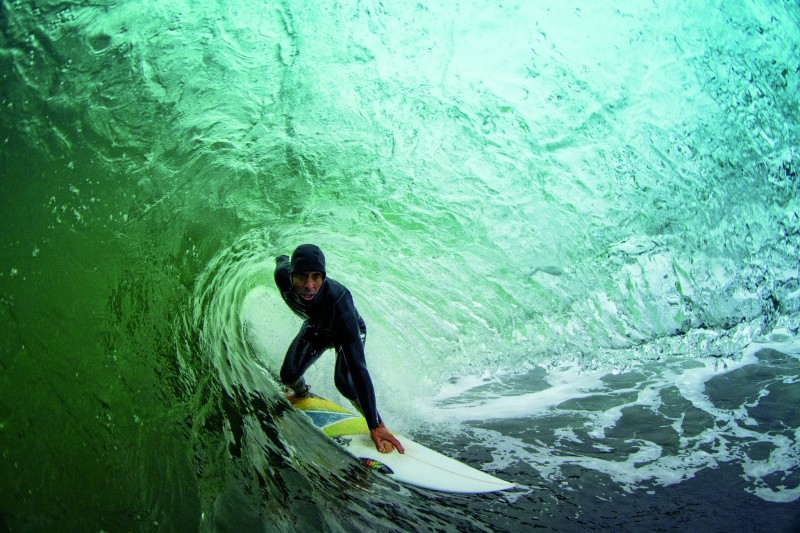 Gioranelli finds some solitude in between daddy duty and plane rides. Photo: Nelly/SPL

Gioranelli, who is now a World Surf League webcast announcer, hails from the beaches of Rio De Janeiro, Brazil. His home break of Postinho is famous for being the site of the Oi Rio Pro, the fourth stop on the Samsung Galaxy World Surf League Tour. The spot’s shifty sandbars occasionally provide quality surf, but the conditions are unpredictable and it’s usually packed to the gills with scrappy locals.

“If you live there and keep a close eye on it you will get some incredible barrels,” says the 40 year old regular footer. “If not, there’s a 95 percent chance it will be closing out when you check it.”

This is how many of Brazil’s beach breaks operate, and the result is a free for all where the generally accepted surf etiquette is thrown out the window. To be noticed by potential sponsors surfers must claw their way to the top of this vicious pack with dogged focus.

As a grom, Gioranelli dreamed of being a pro surfer and competing with the best in the world. He grew up without his father and times were tough, but his mother was very supportive of her son’s decision. 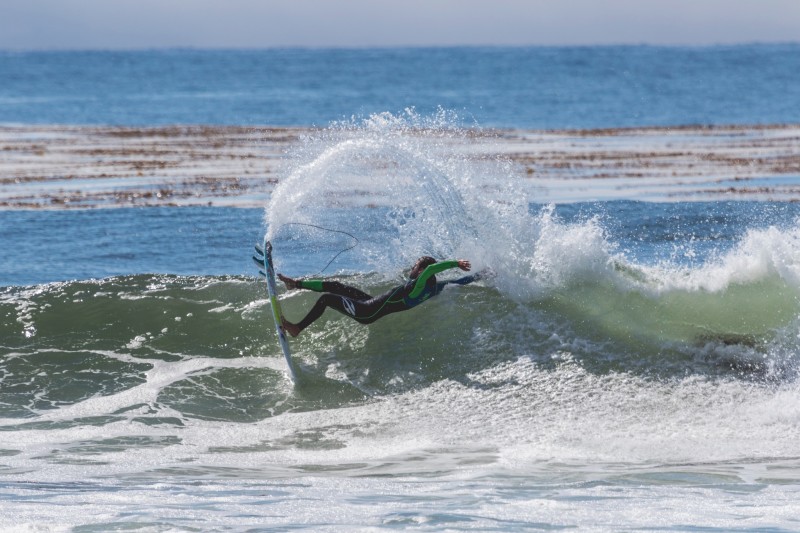 While Santa Cruz might be laid back. Gioranelli’s surfing is quite the opposite: fast and furious. Photo: Carlos Chaves

“My mom would ask me, ‘Do you want something? How bad? Then go get it!’” Gioranelli recalls. “So I decided that I was going to work as hard as I could to do just that. I didn’t have a sponsor, only belief in my potential. I fought hard and every year I got better and better.”

In time, Gioranelli secured a sponsor—a local rock band called Detonautas roque Clube that supported him on his rise to the top of the Brazilian ranks. When Americans think of pro surfing, international brand sponsors and a glamorous lifestyle usually come to mind. But Brazilian pro surfing is a veritable grind that rarely pays off. The surfers are so poor and hungry that their focus to succeed makes your average Southern Californian pro appear asleep at the wheel.

“To be a pro surfer in Brazil is really, really hard,” Gioranelli says. “I had a sponsor at the time, but they didn’t pay me a whole lot, so I had to save prizemoney to invest in boards, tickets, hotels—everything. Brazil is so huge and there are so many stops on the tour. I’ve travelled all around Brazil many times, most of the times on bus, where 20-hour bus rides were normal. You really have to want it.”

It was an enormous adjustment from that world to the waters of Santa Cruz. He admits that there were some minor run-ins in those early days, but it wasn’t long until he made friendships and began to earn a spot in the lineup. 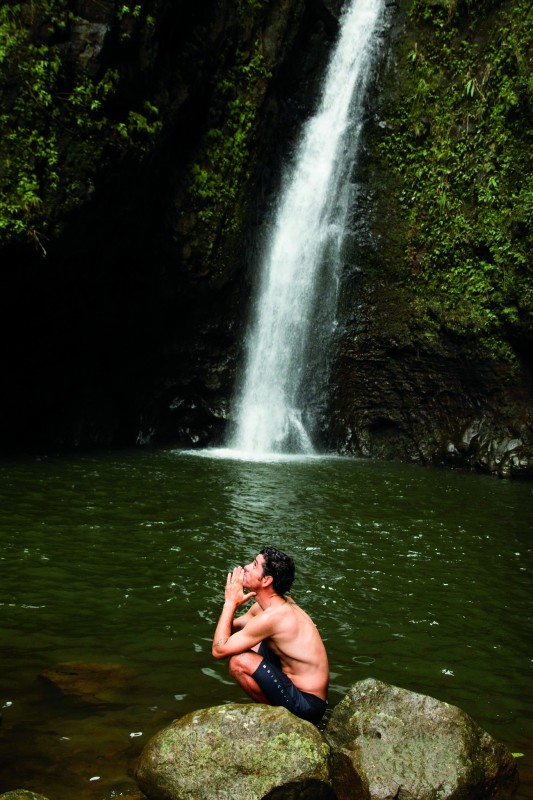 “In Santa Cruz, being a small town, there are people with a protective attitude of their spot,” he says. “At the same time there are a lot of surfers who, if you respect them, they will respect you back regardless of if you are a local or not. I earned the respect little by little, and also knowing how to surf helped me out. I think with respect and dignity I conquered my space. I don’t consider myself a local but I think people respect me enough so I can surf in peace.”

Six years ago, Gioranelli’s extensive insight and experience in competitive surfing secured him a dreamy position as a commentator for the Portuguese broadcast of the World Surf League Tour. He calls the action and probes the athletes to get give the viewer a better understanding of the dynamics of a pro-surfing event.

“I had given the pro surfing thing my best effort, but ultimately I wasn’t able to make a career out of it,” he says. “That’s OK. I now have the dream job. I get to go to waves like Jeffreys Bay [South Africa] and Hossegor [France], hang out with a bunch of great surfers and talk about surfing all day. I’m so blessed to have had this opportunity.”

Gioranelli feels as though he’s mellowed out with age and can accept that his raging desire to be the best isn’t driving his existence any longer.

“I was a bit of a dick when I was younger, I have to admit that,” he says. “I was all cocky and aggressive. It was when I started doing yoga that I got a punch in my face. I started to realize [that] my whole life I’ve been a nice guy, but for some reason, in the water, I wasn’t. I wanted all the good waves. … Yoga changed me for the better. I had an awesome teacher and I was learning every day how to be calmer, more respectful to others, to be a local in the water, but a respectful local. Letting it go: the sponsors, the contests, the ego.”

It’s this positivity and dignity that stands out so much to those who know Gioranelli and has led to the local community embracing this now-humble shredder.

“I think we are here in this world to learn, some people will, some people won’t,” he says. “Some people never grow up and they will have their teenage mind forever, and some other people come to realize their mistakes and grow from them.”