On the nose with a Santa Cruz shaping idol 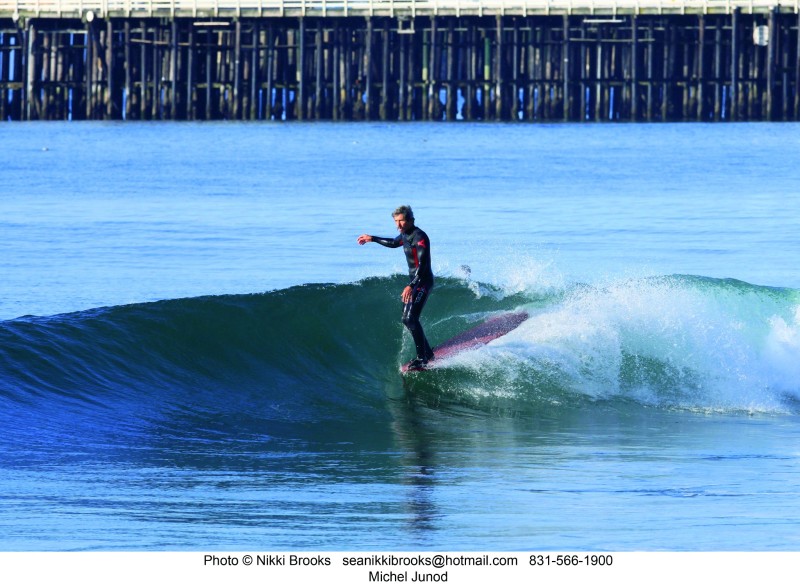 There is sometimes an unflattering, and often undeserved, stereotype of older surfboard shapers: that they are cantankerous and jaded old grumps limping through their shaping bays like lame prize horses, their brains frazzled from long-term exposure to hazardous resin, foam and fiberglass (that, or from all the acid they dropped in the ’60s and ’70s). Sixty-seven year-old boardmaker and longboarder Michel Junod is none of that. He’s robust, clever, grateful and just plain stoked on life, even in the face of a market that is primarily focused on brand name, mass-produced shortboards and fishes. He has a winning business model—making people happy—that’s worked for him the past 50 years.

“People are stoked when they get a custom surfboard,” Junod says. “I’m known as a guy you can come to for a fun, custom board.”
Born in Santa Monica in 1948, Junod grew up in and around the water. From an early age, his mother gave him swim lessons and would take him to the beach in the summers to enjoy the sand and surf. By the time he was 10, he and his best friends would spend most of the summer body surfing and hanging out at the beach. “If you are born by the beach, you don’t really know anything else,” reflects Junod. He caught his first wave on the south side of the Santa Monica Pier in May 1962, around the time that surfing was really taking off in Southern California.
After a few years spent honing his skills, Junod met Carl “Tinker” West, the owner and shaper of Surfboards by Challenger in Mission Beach, San Diego. Tinker built him a board, which led to his first surf team experience and introduction to shaping. In 1966, Tinker moved to the East Coast to open a surfboard factory in New Jersey. That summer, he invited Junod and a couple of other team riders to come work on and promote his boards. 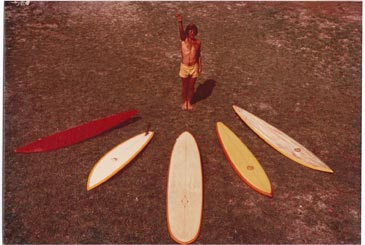 “That’s the way a lot of guys learned—either they worked at the shop sweeping as a kid, or surfing for the team,” says Junod.
Junod spent the next three summers learning to shape and build boards for Tinker. He moved to Santa Cruz in 1970 after an old friend offered him a job shaping for Overlin Surfboards and promised an uncrowded “Wild West” of a surf town. “And wild it was,” he remembers. “There weren’t any leashes yet so no one was even surfing at high tide because they didn’t want to lose their board into the cliffs. There were just a few of us shapers back then. It really was a whole different world.”
After only a few chilly winters in Santa Cruz, Junod could hear the tropics calling. Over the next two decades, he lived and surf on the North Shore of Oahu and on Kauai, where he started a family with his wife, Jodi. He made a modest living shaping for some of the islands’ most reputable brands: Surfline Hawaii, Lightning Bolt Surfboards and Dick Brewer. 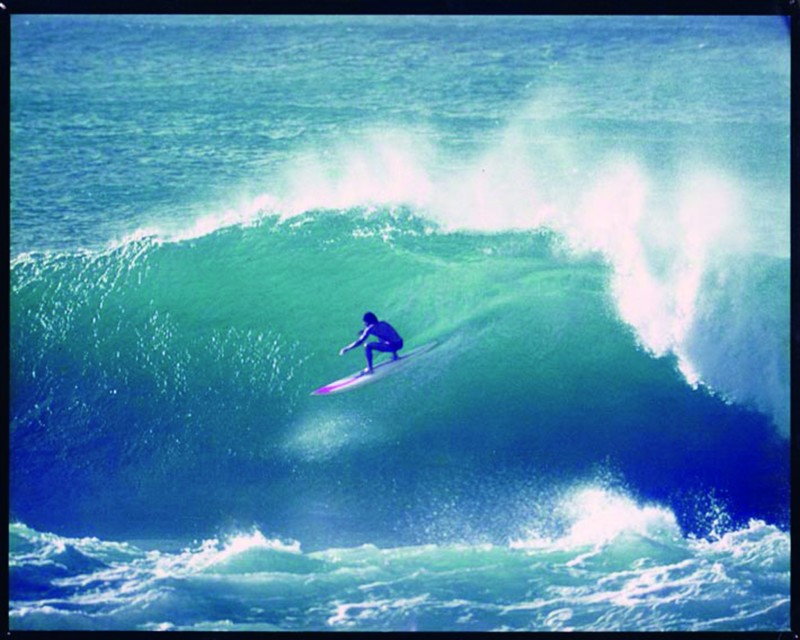 In 1990, he and Jodi packed up and returned to Santa Cruz, where he began shaping for Pearson Arrow Surfboards and was soon drawn back to his longboarding roots. Before long, Junod had become an integral member of the local longboard scene, which has seen a resurgence over the past 20 years.
He was a regular at contests, riding for the Big Stick Surfing Association surf club, and began his own label, shaping for most of the area’s best longboarders. All the while, he continued to hone his skills on the nose. Just ask Santa Cruz’s noseriding heir apparent, Mark “CJ” Nelson. 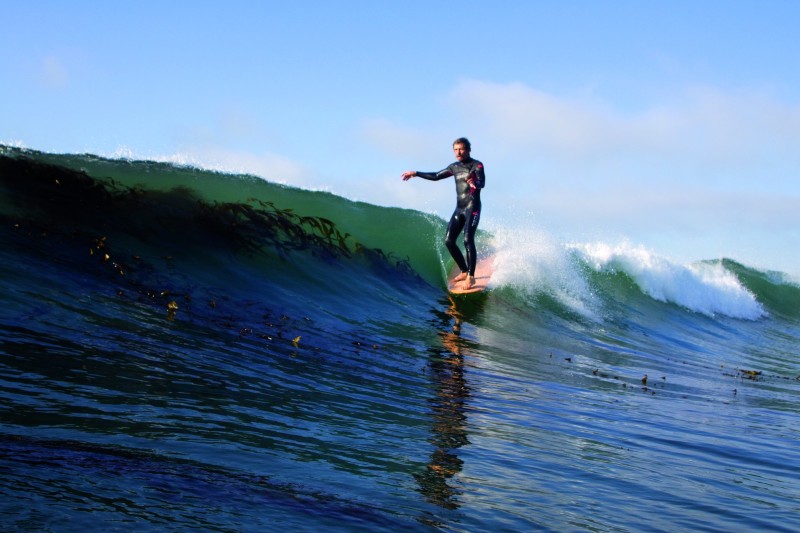 “Michel Junod is hands down my favorite longboard surfer to watch here in Santa Cruz,” says Nelson. “He is a perfect example of a surfer who has made the appropriate sacrifices in his life to keep his surfing and style top notch for the last 40 some odd years. His surfing is smooth and simple with perfect positioning and an emphasis on style. Dignified and honorable—exactly how I strive to be.”
These days, Junod is still shaping custom boards and hanging 10 all over town. He has this advice for the aging surfer who’s contemplating throwing in the towel: “I always tell people who want to or are close to quitting surfing in their 50s and older, ‘Don’t quit, because you’ll never start again,’” he says. “If you are physically able, and want to keep that part of your health regimen and stoke going, you have to keep at it because somebody else is going to take your place in the lineup and you’re going to come out one day, flail [around] and go ‘Aww, I can’t do it anymore!’
“Later, if you change your mind and want to get back into it,” he adds, laughing, “you better move to Mexico or something—because in Santa Cruz, there are infinite guys to contend with.”
Find him online at surfboardsbymicheljunod.com. 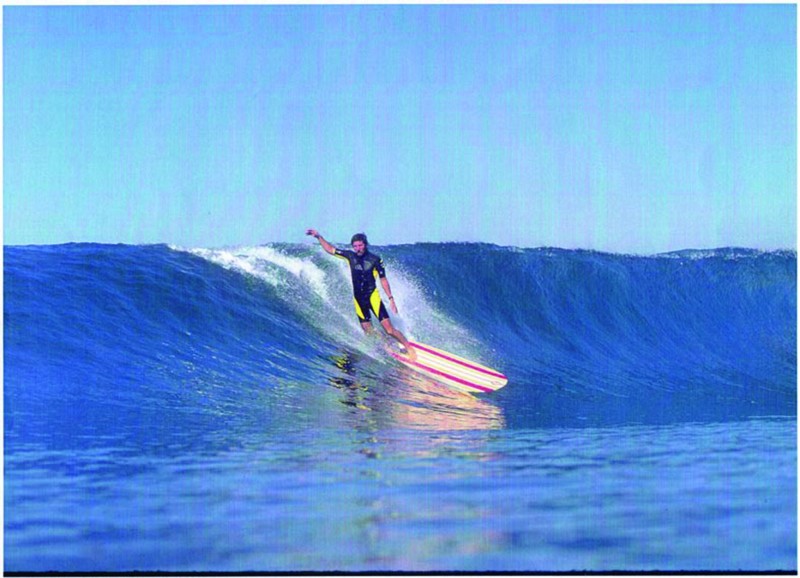 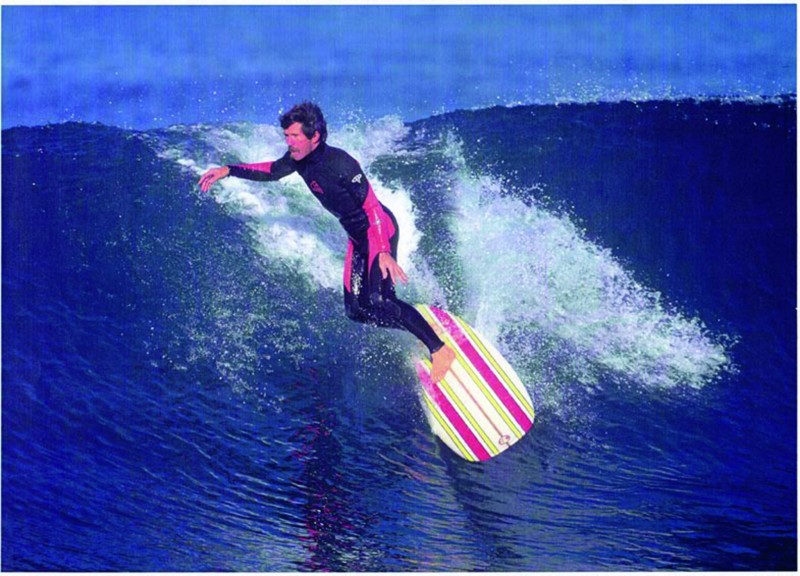 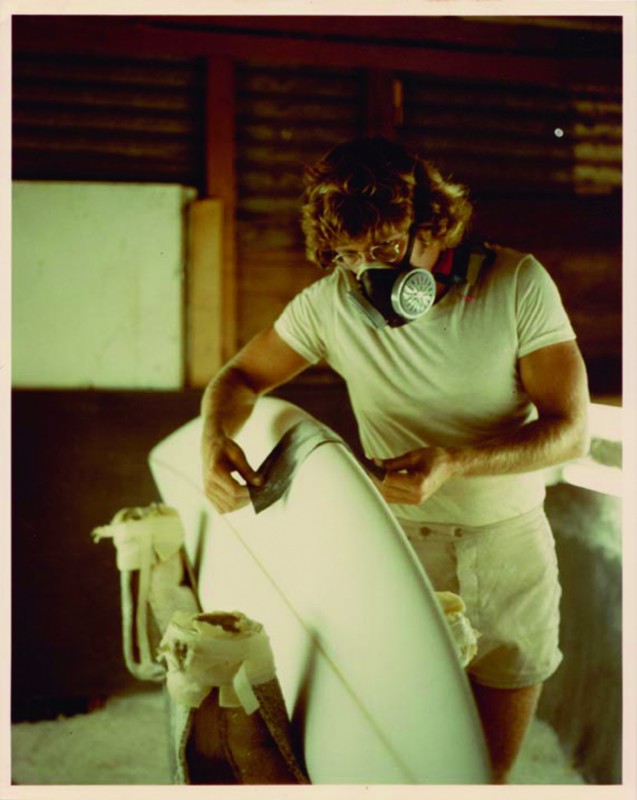 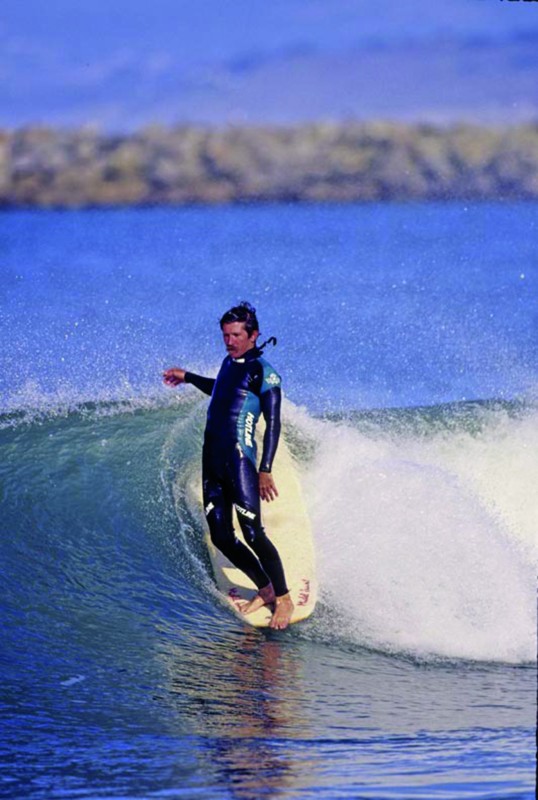