Local legend London Nelson, a freed African American slave, famously gave his entire estate to Santa Cruz City Schools when he died in 1860, even though he himself had never been to school and black students in Santa Cruz at the time were denied attendance. The generous act put him down in Santa Cruz history—but in the process he suffered a post-mortem name change so pervasive that it became institutionalized. He’s been Louden Nelson ever since, including as the namesake of the Louden Nelson Community Center.
Born in 1800 on a cotton plantation in North Carolina, Nelson was given the surname of the plantation owner, William Nelson, and the first name of an English city: London. His brother was likewise christened as Marlborough. When the plantation owner’s son inherited the estate, he moved it to Tennessee before striking out for the California gold rush with London and Marlborough. The men did well enough in gold mining for Nelson to buy his freedom and, in 1856, he moved to Santa Cruz, which already had a reputation for being a liberal county and a tolerant community for freedmen. 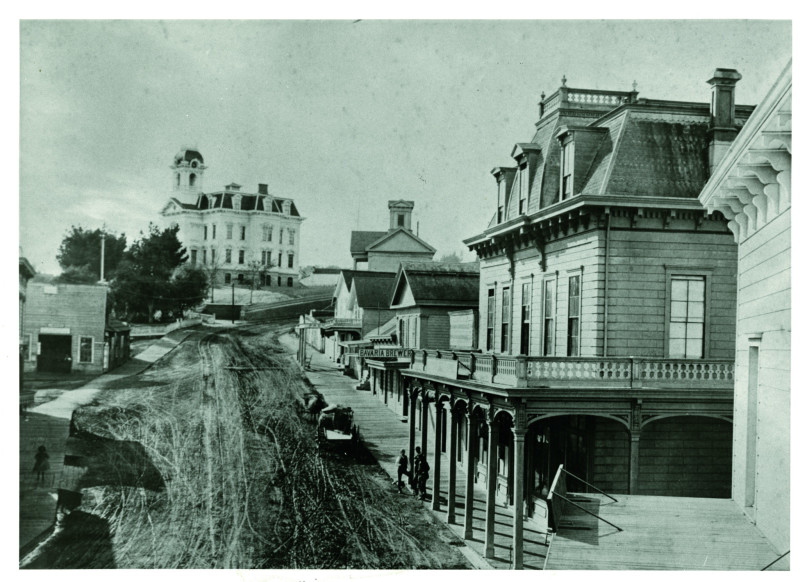 Mission Street circa 1880, about two decades after London Nelson lived on Mission Hill. PHOTO: COURTESY OF THE MUSEUM OF ART AND HISTORY

Nelson used his gold earnings to buy a bit of land near the original Mission Hill school and settled in to farm life. Unfortunately he’d been in failing health even before his move and only lived four years in Santa Cruz before succumbing to tuberculosis in 1860. His estate was valued at just under $400 and was deeded to Santa Cruz City’s school children, who still make pilgrimages to his gravesite in Evergreen Cemetery today to honor the gift.
That gravesite, however, is a focal point in the mystery of Nelson’s name change. “It’s believed that it was the mistake of the grave marker carver,” says Marla Novo, collections catalyst at the Santa Cruz Museum of Art & History. Indeed, the simple white marble marker clearly designates the final resting place of “Louden Nelson.” 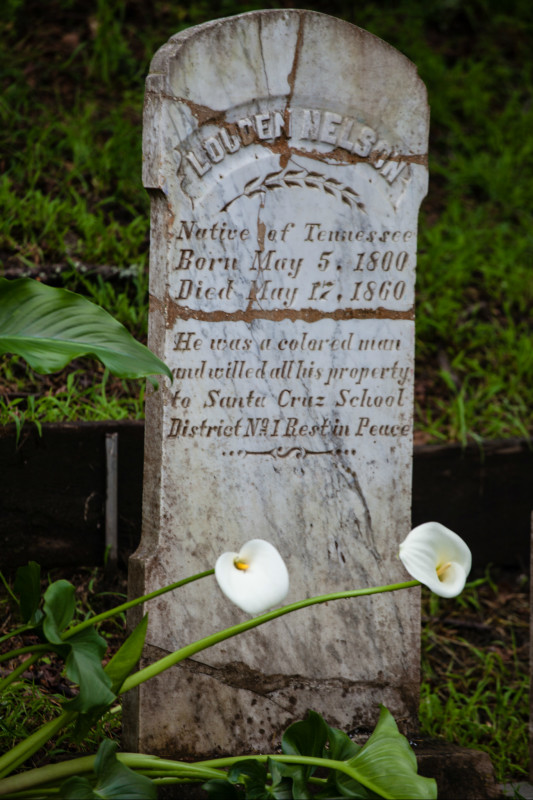 But Novo points to further documentation by local writer Geoffrey Dunn and the late historian Phil Reader, who meticulously combed probate records, newspaper articles, church archives, and slave records in several states to uncovered a bewildering Pandora’s box of mistaken and misleading names unrelated to (and sometimes predating) the tombstone error. Nelson was at various times and places referred to in print as everything from Linden, Louden, Ludlow, and London to “Old Man Nelson” and further insulting and unprintable racist slurs.

While “Louden” was not the first or only bastardization of Nelson’s Christian name, it became, quite literally, carved in stone and has been the name of record ever since.
But why has it been allowed to remain unchallenged? While little has been done to change landmarks like the community center name or the gravestone, local organizations have been doing what they can to correct the misnomer in everything from Wikipedia to library citations to placards and markers in the museum and cemetery. “I agree we should always call him London,” says Novo, emphatically. “We’re all about telling the real story, not hooey history. Whenever we talk about him we use his correct name, and we tell the story in the [museum’s] history gallery and in anything we publish.” Likewise the Santa Cruz Public Library cites London Nelson’s correct name (along with the incorrect, but better known, one) in its history pieces, as does local tourist app Mobile Ranger, localwiki.org and other informational sites.
For now, Nelson’s legacy lives on in a multi-monikered mess, however, which oddly ends up being perhaps the best gift he could have given the children of Santa Cruz: a lesson in the power of education. The man who never had the opportunity to learn to read and write was only able to sign his will and testament with an “X,” which left history to interpret his name as it would. But he gave his entire estate to help ensure such would never happen again to future generations in his beloved adopted town.

3 comments on “Remember When…”