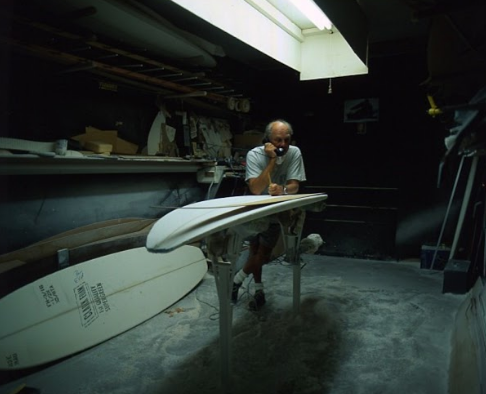 Thirty thousand. That’s the number Doug Haut throws at me when I ask him how many surfboards he’s shaped in his lifetime. My jaw hits the floor: 30,000 surfboards. It’s an unfathomable amount. That’s 12 boards a week for 48 years. That’s more than two surfboards a day—by just one man.

Not only has Haut shaped tens of thousands of boards, he’s kept notes on every single one. Dimensions of every board shaped are written in journals, which are then stored inside of Tupperware containers in a small back room of Haut Surf Shop at 345 Swift St., the shop he has owned since 1969.

Born in 1940, 2,000-plus miles from the Pacific in Milwaukee, Wis., Haut moved west to Los Altos Hills at age 14, started bodysurfing at San Gregorio State Beach soon after, and eventually turned his eyes south toward Santa Cruz, where he learned to surf Cowell’s, the Rivermouth and The Lane in 1957.

Haut moved to Santa Cruz in 1959, when it was a still a sleepy, seasonal retirement beach community. You could rent a place across from the beach for $75 a month.

“It was pretty dead. [There were] a lot of old people here then,” chuckles Haut. “They pretty much rolled up the cement sidewalks at 6 o’clock. There was hardly anyone surfing. 41st Avenue was a two-lane road with cow pastures on both sides. There was nothing there. The Hook was the secret spot.”

After a few visits to the North Shore of Oahu, Haut decided it was time to ditch the cold water, empty lineups and cheap rent of Santa Cruz for tropical paradise. It proved to be the smartest decision of his surfing life. Coming under the mentorship of legendary surfer and shaper Mike Diffenderfer, Haut ding repaired, glassed, laminated and sanded his way into becoming a well-rounded shaper, while also becoming a world-class watermen on some of Hawaii’s most infamous big waves of the time alongside Greg Noll, Buzzy Trent and the Hoffman brothers. 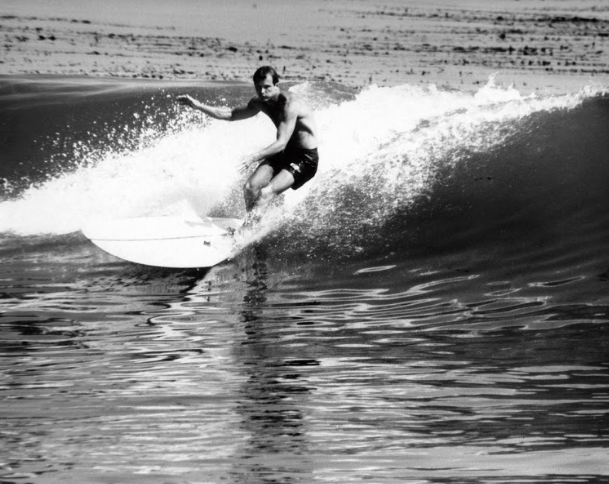 Haut returned to Santa Cruz in 1964, where he worked under George Olson, established his own clientele and branched off with Haut Surfboards in 1965. His surfboards sold out quickly from the start. “We got bombed with orders,” says Haut. “I was real busy.”

He opened three showrooms on 41st Avenue, and another on Portola Drive that burned down. “I was surfing in Puerto Rico at the time,” Haut recalls. “My brother called me up and said, ‘Your shop just burned down.’ I had to drive back from Florida to California. I had a truck full of blanks I brought back with me. I started shaping out of my backyard ’til I could get my own shaping room again.”

Haut opened his current Swift Street location in 1969, and it could now be considered a defacto local historical landmark. Fifty years of selling and shaping surfboards out of one location is a testament to the passion and dedication Haut has for surfboards and the surf community. I ask him if any famous people have approached him about making them surfboards.

Now 77 years young, Haut is slowing down, but there’s no retirement on his horizon. He developed one of the world’s most popular boards (the Pumpkin Seed) in the last decade, and continues to shape one to two boards a day. Someone recently found a Haut board from 1968 washed up on the beaches of Bali and gave it to him. He ran the dimensions through his computer and is now working on a full-blown replica of that board. “I can draw the board up on my computer and then use a CNC machine to cut it out for me and then I do all the fine tuning by hand,” he says.

“I am still learning,” Haut goes on. “It’s a never-ending story. I am just going to keep doing it ’til I physically can’t do it anymore. I am slowing down a little bit, but the boards I am making right now I feel are some of the best boards I have ever made.”