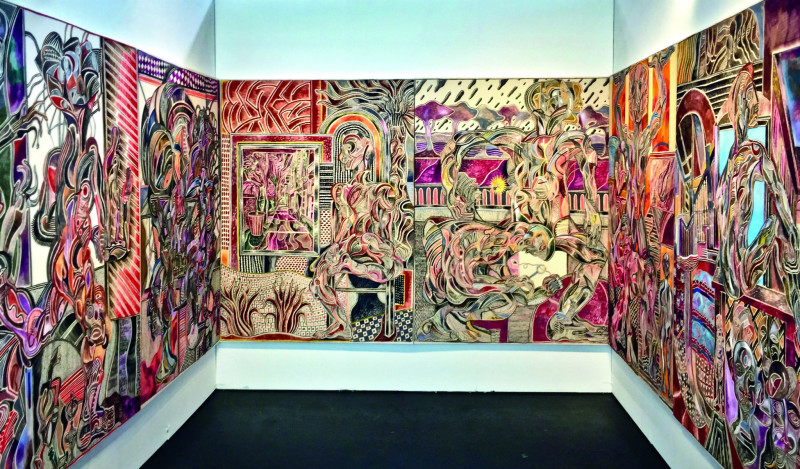 According to a popular meme, outside your comfort zone is where all the magic happens. This applies to almost everything we do, whether it’s surfing, traveling, dating or asking for a raise.

As someone who is constantly stretching his skills to the limit, Marin County-based painter Zio Ziegler is a walking illustration of that idea. Anytime he finds himself comfortable with his ability to get a desired artistic result, he starts working in an area he’s less confident in, such as a new style of painting or a new medium altogether.

“That’s what it’s all about: that sense of joy, discovery and not knowing what you’re going to make, or not knowing how to make the thing you’re going to make,” the 29-year-old artist muses.
While growing up in Marin County, Ziegler had a passion for bikes, skating and art— particularly graffiti. He became a professional artist in the fifth grade, when he started selling T-shirt designs to surf shops. Now a full-time painter and sculptor, the Rhode Island School of Design graduate speaks about his work with humility.
“I’m someone who doesn’t have the innate ability to adapt and to flow with things,” he says. “I have to study really hard to learn how to make these pictures work for myself.”

Ziegler, whose introspective works often contain elements of cubism, primitivism and tribal art, feels that one can never be a good painter. One can become competent at a given style, but this can be a sign that the artist has stopped progressing.
“I look at good paintings like mature people… which I’m probably not,” he adds. “You can’t just pretend to be mature. I think it’s the same thing with painting. You can fake your end result, but you can’t actually achieve it with the kind of confidence where you can repeat it until you work everything else out. And that’s why I think painting is really a 100-year pursuit.”

The living artists whom Ziegler admires are typically in their 60s or 70s. “I think this is not a cliché 10,000-hour sort of thing,” he says, referencing author Malcolm Gladwell’s famous statement that mastery of a skill comes through approximately 10,000 hours of practice. “I’m actually resentful of that anecdote: Do anything for long enough, and you’re a master. I think that’s ridiculous. The mastering of painting is something I aspire to.”

He continues, “Maybe to put it in the terminology of skating, surfing or riding bikes: You can see surfers or skaters that hack through the tricks. They have their way of behaving, and it’s not necessarily a fluid one. Then you see the people who are meant to do this and can integrate new things into their repertoire really easily. I guess I admire those that, rather than being robotic and dwelling in each result, never stay at the pinnacle of their own competence; they always push and use their native style to achieve new results that look very different than what they were known for before.” 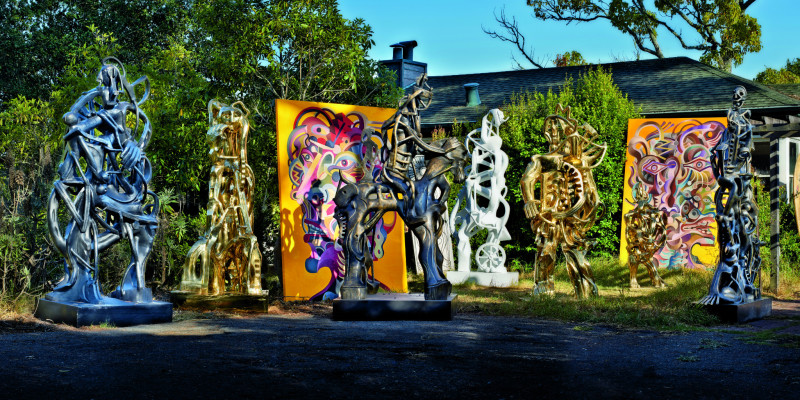 About a year and a half ago, Ziegler’s ongoing effort to branch out into unknown areas led him to take up sculpting. Whereas he’s well versed in the techniques and tools of painting, the nuts and bolts of sculpting are new and challenging for him.

“Making a sculpture, I want to make an arm, but I don’t know what the right kind of armature is, and I don’t know whether to put that on with duct tape or weld it,” he explains. “So it’s a whole different process of running around trying to figure out how to handle the more formidable challenges of gravity. I’ve always said that the sculptures would look totally different if I was on Mars; if there was a different gravitational pull, I’d be making different kinds of sculptures.”

Ziegler, who admits to being “entirely, completely, 100-percent obsessed” with his craft, devotes almost all of his waking time to art. Rewarding as this can be, it isn’t always fun or easy.
“There are definitely elements of artmaking that can wreck you sometimes,” he states. “It sounds ridiculous—my friends always joke around and say, ‘What, did you have a hard time putting lavender on the canvas today, Zio?’ They’re actually doing real, important stuff in the world. So I think it’s good to look at it with some silliness—at the end of the day, it’s just art-making—but it can feel so serious in your head, and it can feel so ultimate and existentially challenging that you’re forced into this degree of confrontation with yourself after long periods of solitude and thoughtfulness that I think would be nice not to look at sometimes.” 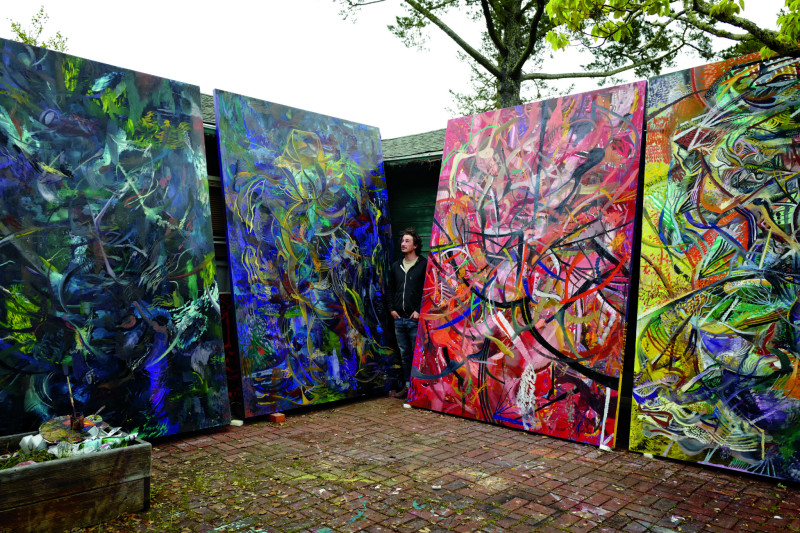 That said, Ziegler doesn’t sit around all day contemplating himself and his work. You’re more likely to find him keeping his mind stimulated with podcasts and audiobooks while he paints. As he puts it, “I get to spend my days learning about other people and their fascinating accomplishments, books and theories, and I get to make paintings that are by-products of that learning process.”
Learn more at zioziegler.com.