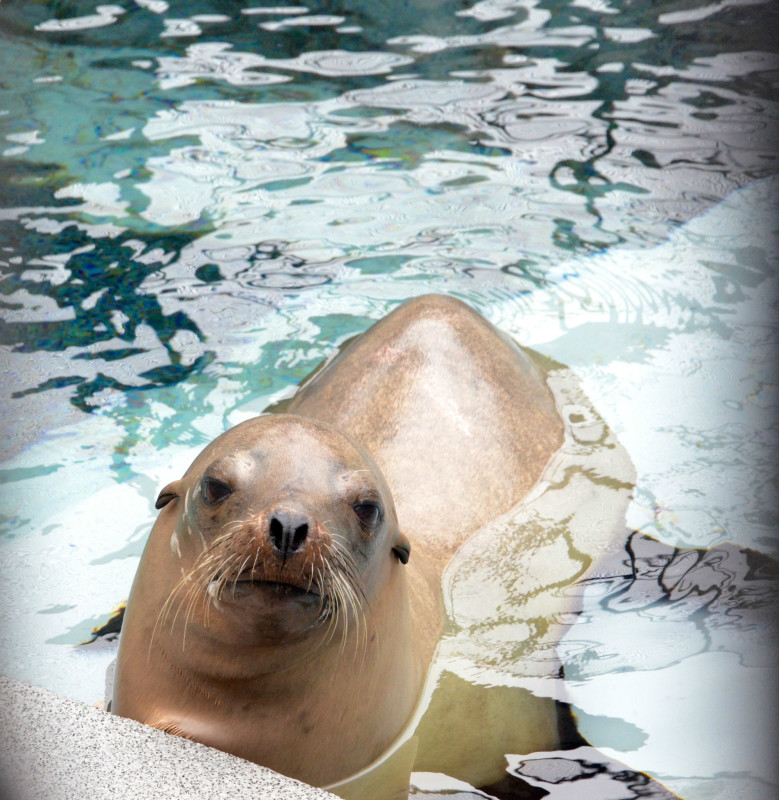 A recovering sea lion at The Marine Mammal Center in Sausalito

At the center, they have 82 sea lions receiving the care from staff veterinarians for domoic acid toxicity. Why the rise of sick sea lions? It is a toxic algae bloom in San Luis Obispo. The bio toxin in the algae is called pseudo-nitzschi (domoic acid), and it thrives in warmer water. The algal bloom is not a new occurrence on the West coast, it was first discovered in 1998, however the intensity of the blooms over the past decade is.

Domoic acid can poison sea lions, otters, whales, birds, and dolphins. There has been a massive rise in affected sea lions in the years, 2009, 2014, and 2015, according to data from The Marine Mammal Center.

The center has already seen above average numbers this year, with 82 patients on-site, and the average for infected animals is about 70 per year. The center used to only treat domoic acid animals seasonally, now it is year round.

The algae are poisoning shellfish, sardines and anchovies, which are the sea lions favorite foods. It acts as a bio-toxin and affects the animals hippocampus with an   accumulating affect on the brain, and animals that are found in the acute stages have a better chance of survival. The longer the animal has been exposed, the less likely it is to survive.

Some of the symptoms of suffering animals include, head weaving, head bobbing, closed eyes, shaking, disorientation, lethargy, malnutrition, and seizures.

Dr. Cara Field, staff veterinarian at the main hospital in Sausalito believes the reason for this increase in toxic agal blooms could be related to warming waters.

“There are a lot of factors that go into the harmful algal blooms, certainly the warming waters play a role, the ocean temperature has increased over the last 30-40 years by one degree celsius which definitely promotes agal growth,” said Dr. Field. 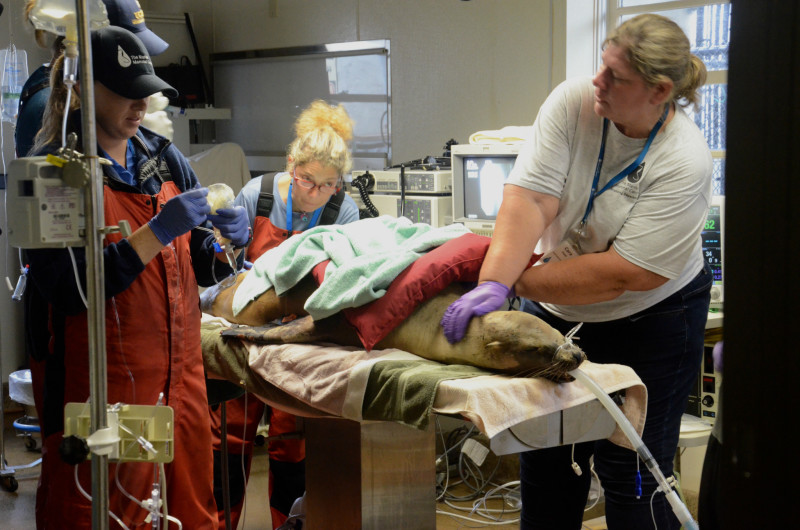 Dr. Cara Field and a team of vets help treat an adult female sea lion at the Marine Mammal Center in Sausalito.

Dr. Field has been treating sick animals for the last three years, and said she relies on surfers and beachgoers to keep an eye out for the sick animals.

“We really appreciate the surfing community… they are familiar with what a healthy sea lion looks like, sometimes they are riding the same wave… they often can see animals in trouble before the rest of us can, so they are great eyes and ears for us,” Dr. Field said.

Sea lions suffering from the bio-toxin often haul out onto shore to rest because it can become too difficult for them to swim. That is where calls from the public become crucial to help the center reach as many animals as they can.

“Some of the infected animals end up having seizures in the water and drown, most of the animals we see have just enough sense to come to shore and try to ride the disease out.” Said Dr. Field.

Dr. Field said about half of the sea lions poisoned from domoic acid she treats at the center are released. When the animals arrive at the center, they are monitored, given fluids, and anti-seizure medication. If the veterinarian staff sees improvement in the following week, then they have a good chance of being released within the next couple weeks. Some unfortunately, are beyond treatment and are humanely euthanized.

Dr. Field explains that this sounds harsh, however it would be cruel to release a brain damaged sea lion into the wild, where it would most likely forget how to swim and drown.

“Unfortunately the animals that have years of toxic exposure, we have put satellite tags on them in years past and we found that they go into the ocean and they don’t remember how to be a sea lion,” Dr. Field said. 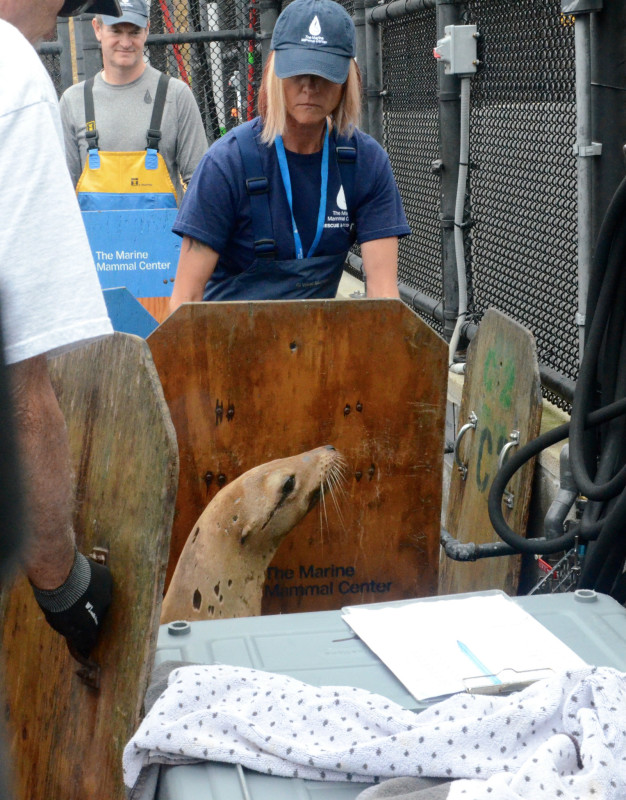 A sea lion being loaded up in a crate who has been treated for domoic acid, recovered, and is healthy enough to be released.

Dr. Field said about half of the sea lions poisoned from domoic acid treated at the center are released. Not only is the bloom bad news for marine mammals, it is disconcerting for humans as well.

“The sea lions are sentinels for whats going on in the ocean…If we eat the same food they are eating we would be infected, especially anchovies and sardines,” said Dr. Field.

At The Marine Mammal Center Monterey Bay satellite in Moss Landing, they treat the animals infected from the San Luis Obispo bloom, before sending them to the main hospital in Sausalito.

It is likely this bloom will be moving north toward the Monterey Bay and continue to poison the especially vulnerable sea lions.

Zee Zaballos, supervisor at The Marine Mammal Center in Monterey Bay, said that there are other threats to marine mammals in addition to domoic acid.

“An elephant seal was rescued at Natural Bridges that ingested a balloon, we know that because she coughed it up, and we like to share this story with kids to educate about plastic waste,” said Zaballos.

Plastic that is discarded by humans often ends up in the ocean and the animals easily confuse it with a food source. According to the Marine Mammal Center’s website, 100,000 marine mammals die a year from trash in the ocean.

Zaballos tries to reach all age groups through education outreach and hopes to inspire the public to get involved and care for our environment.

“We explain what it means to live in the Monterey Bay sanctuary, this amazing body of water-what it is and what it represents so they have a personal connection with it,” Zaballos said.

Both Dr. Field and Zaballos want the public to know the most important thing they can do is keep an eye out for distressed animals, and to call the center so they can get to the animal as soon as possible.