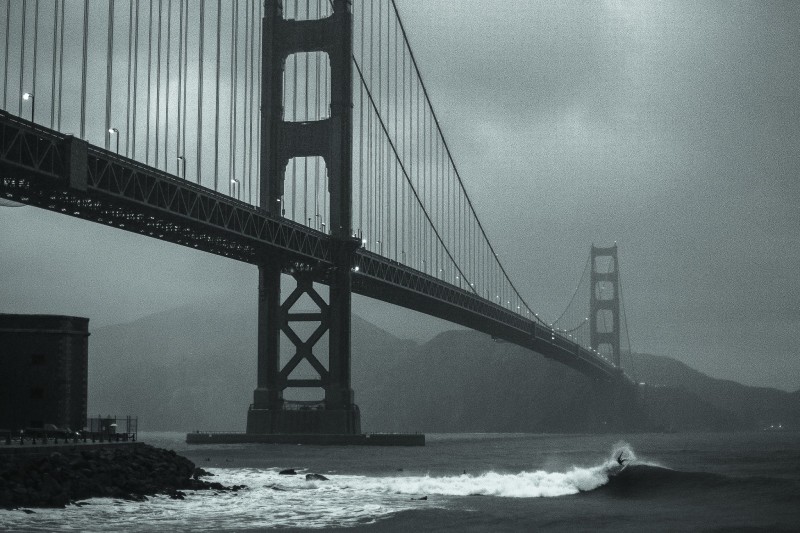 It was the project they said was impossible: building a suspension bridge to connect San Francisco to its neighbors to the north across the mile-wide Golden Gate Straight. Opened to the public in May of 1937, the Golden Gate Bridge recently celebrated its 80th birthday. But building the iconic structure that is hailed as one of the world’s civil engineering wonders almost didn’t happen. Numerous experts proclaimed that a bridge couldn’t be built across the strait due to unruly winds, strong currents, deep water, and blinding fog, among other issues.

“There were a lot of concerns, but the fog was a big one,” says Robin Seeley, a volunteer for San Francisco City Guides (sfcityguides.org) and bridge expert. “The workers needed visibility to see what they were doing.” 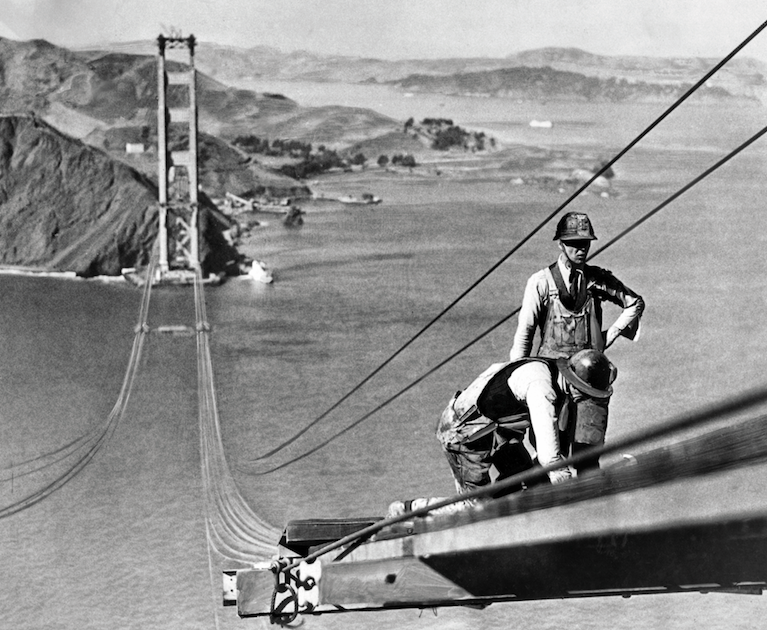 Dealing with extremely strong currents at the mouth of the Bay was also a major concern. “They said that building the fender that surrounds the south tower was like trying to build a football field in the middle of a river,” adds Seeley.

That wasn’t the only hurdle the bridge faced. There was the small issue of money—as in the question of who was going to pay for what was, at the time, one of the largest civil engineering projects in the country. Compounding the financial challenges was the timing. After years of lobbying efforts, the project was approved by the state legislature in 1923 by creating the Golden Gate Bridge and Highway District, which was then incorporated in 1928. But after the stock market crash in 1929, the District was unable to raise the construction funds and was forced to pursue a bond measure. Even though the measure passed (in the midst of the Great Depression), the District was unable to sell the bonds until Bank of America founder Amadeo Giannini stepped in and bought the entire initial issue on behalf of the bank. “They call Giannini the sugar daddy of the bridge,” says Seeney. 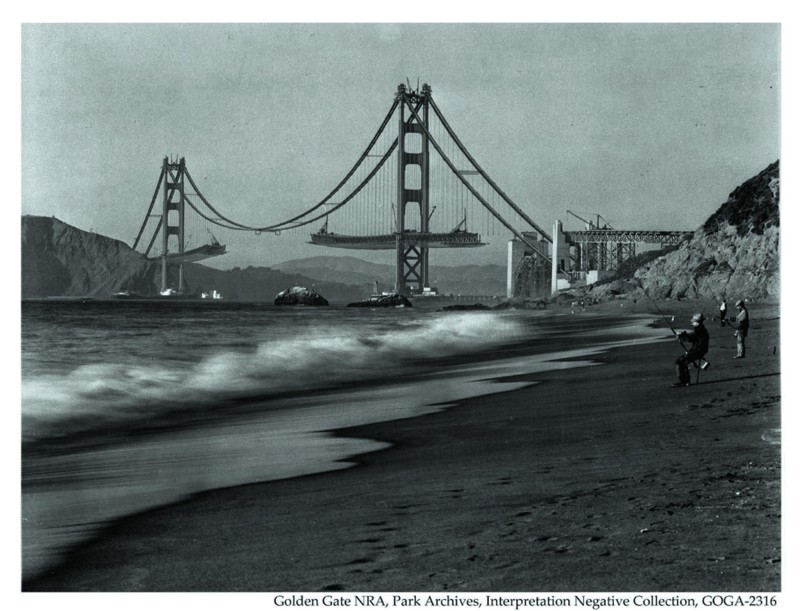 The initial design submitted by engineer Joseph Strauss was for a cantilever-style bridge, and by most accounts would have been a potential eyesore. After receiving significant input from other engineers, including Leon Moisseiff and Charles Ellis (neither of whom received proper credit at the time, particularly Ellis, who was fired part way through the project), the design was altered to a suspension bridge, and eventually to the two-tower suspension design that today is recognizable worldwide. Irving Morrow, who up to that point had been primarily a residential architect, is credited with the bridge’s unique Art Deco design, as well as its distinctive orange color.

Construction of the bridge began in 1933, and remarkably took just over four years to complete, at a price tag of $35 million. It was finished ahead of schedule and under budget—a feat that is almost unheard of by today’s standards. 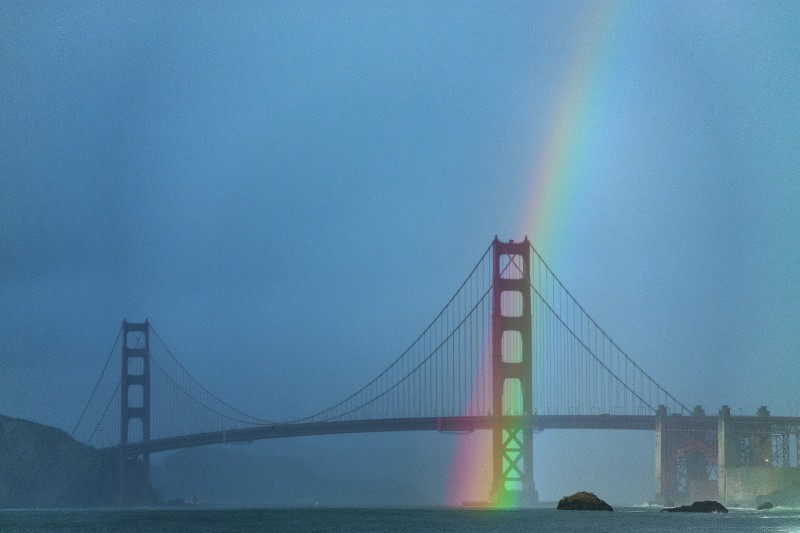 The bridge’s signature orange color was a happy accident.

The color of the bridge is officially called “international orange,” and was initially inspired by the reddish-orange primer that was already painted on some of the steel parts. It was chosen both for its visibility in fog as well as to complement the surrounding natural environment. The U.S. Navy wanted to paint the bridge black and yellow stripes, like a bumblebee, and the Army Air Corp favored a red-and-white stripe candy-cane color scheme. Thankfully, the orange won out.

Painting the bridge is a huge job.

The bridge is comprised of more than 10 million square feet of steel, and painting all that metal is no small task. Contrary to the popular myth that the bridge is painted from one end to the other in perpetuity, in reality the process is one of constantly touching up various areas—not just for the color but also to protect against corrosion from the salty air.

The bridge cables are engineering marvels.

The main bridge cables are each 7,659-feet long, and more than 3 feet in diameter. They’re comprised of 80,000 miles of steel wire less than a quarter of an inch in diameter—enough to circle the world more than three times. They were installed using a “spinning” technique, a tedious process that involves spooling each wire one at a time, end-to-end across the mile-long passage. They eventually developed a way to spool six wires at a time, greatly reducing the time and cost required to install the cables.

The towers are held together by 1.2 million steel rivets.

As the original rivets corrode, they are replaced with galvanized high-strength bolts, which have to be carefully calibrated for correct tension when installed.

The Golden Gate Bridge is the second most popular suicide location in the world.

The bridge has been referred to as a “suicide magnet” and is the second-most used suicide site behind China’s Nanjing Yangtze Bridge. After decades of debate, construction finally began in May 2017 to construct a barrier net below each side of the bridge to potentially catch jumpers.

It’s home to a classic surf spot.
Deep beneath the towering shadow of the Golden Gate Bridge lies one of the most novel surf spots in the world: Fort Point. Located at the south end of the narrowest part of the entrance to San Francisco Bay, the wave at Fort Point bends northwest swells nearly 180 degrees to create an unusual left point break that, due of the bridge backdrop, is also one of the most photogenic waves you’ll find. Despite its location and notoriety, the fickle spot remains less than welcoming to outsiders due to challenging currents, a dangerous rocky shoreline, and protective locals. 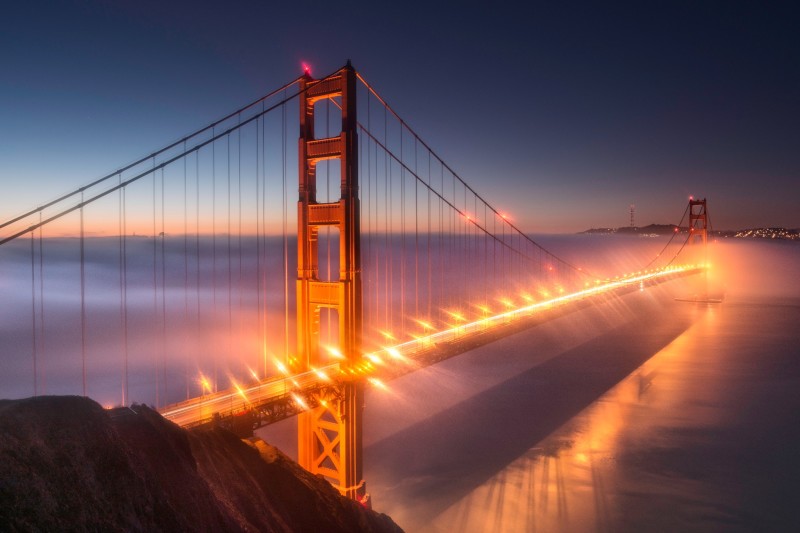