Nearly 20 years ago, shortly after the tragic death of his brother Raymond, barber Larry Vargas was approached by one of Raymond’s former clients. The elderly man had a suitcase full of historic photos of Capitola that he had intended to give to Vargas’ brother, but since he had passed away, he asked Vargas to take some.

Vargas had the photos restored years later and displayed them in his Los Gatos-based barbershop. There, they caught the attention of long-time customer Joel Esparza. “I was astounded,” says Esparza. “I said to him, ‘Larry, do you know what you have here?’”

Vargas gave Esparza permission to scan the restored photos and post them on social media. The two have speculated when the photos were taken and by whom, but neither of them are quite certain.

To find the story within each of Vargas’ six historical photos, Waves brought the photos to Frank Perry, curator of the Capitola Historical Museum. Perry points out that the most prominent feature in each of the photos, the Hotel Capitola, was built in 1895 and burned to the ground in 1929. Within that timeframe, the dates of the photos vary.

Despite their mysterious origins, the photos still show that although many things have changed in Capitola, the relaxing and pleasant atmosphere pervaded the seaside city then and now.

“One of the nice things about studying Capitola’s history is that it has always been a resort town,” says Perry, “and almost everyone who [has] come here over the last hundred years has pleasant memories.”

Way to Wealth and Health 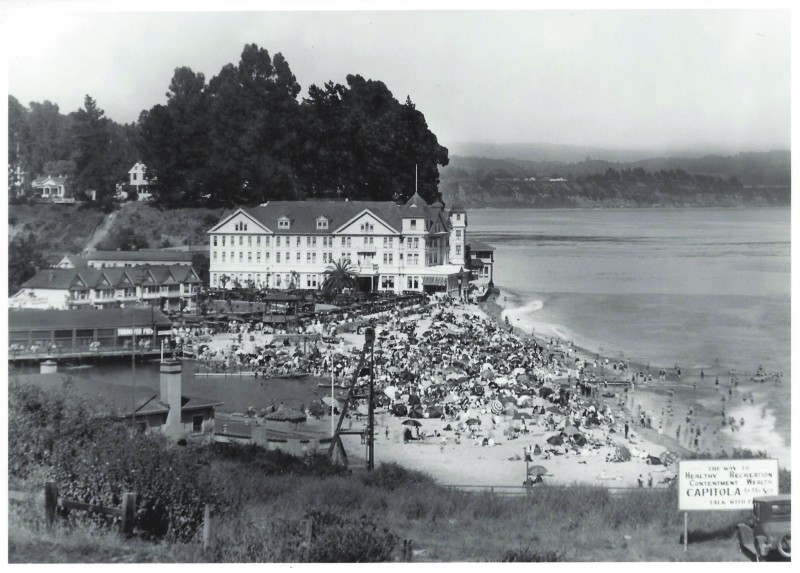 This photo of the beach and hotel was shot between 1924, after the hotel’s Venetian court was constructed, and 1929, when it burned down. Another key landmark in the photo, says Perry, is the palm tree in front of the hotel, which was planted in 1920, and still stands today. The sign in the photo’s foreground reads, “The way to healthy recreation, contentment, and wealth: Capitola by the Sea.” “Many of the resort towns—Capitola, Santa Cruz, and up in the mountains—touted the healthfulness of the climate,” says Perry. “You read the descriptions of these places and they went a little overboard about the health benefits of living here. There were a few exaggerations here and there, but we all know it’s a pretty nice place.” 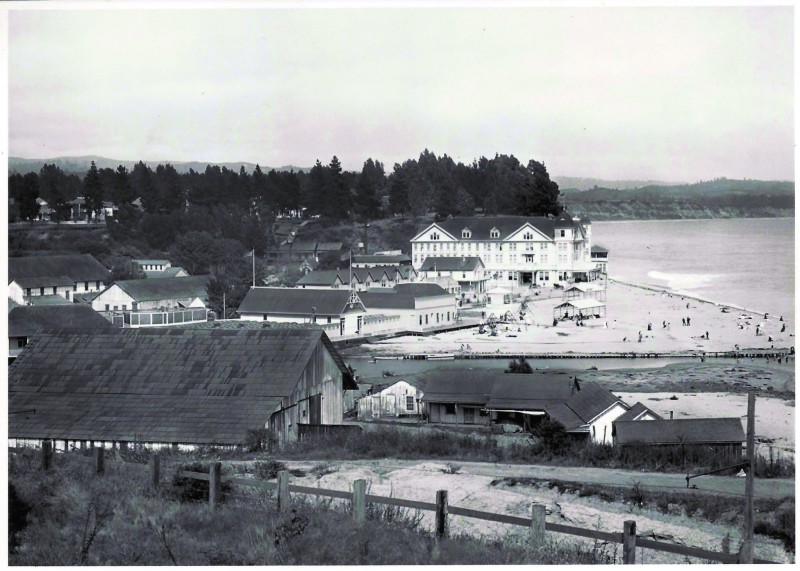 With the second wing of the hotel present and the palm tree absent, this picture lies in a similar timeframe to the previous photo. The trees on the ridgeline on the photograph were planted as a windbreak. But when they grew up and blocked the residents’ view, the trees were chopped down. 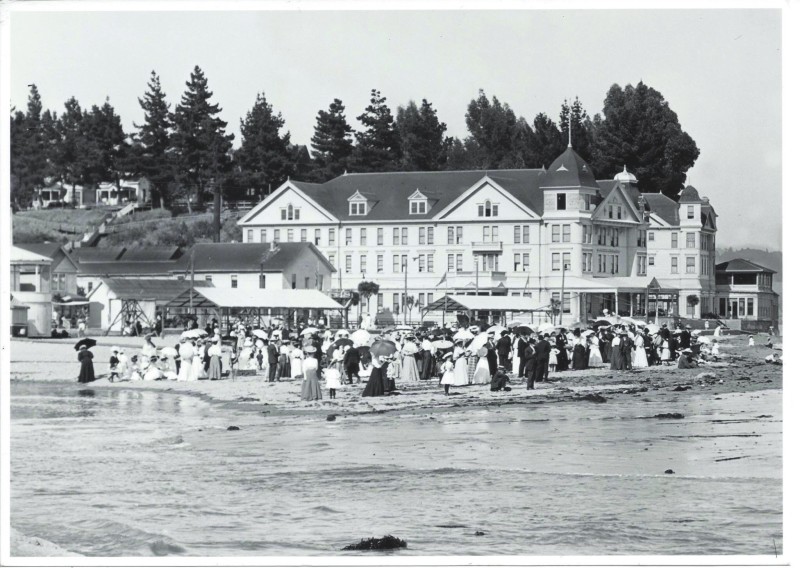 This photo shows Soquel Creek flowing out to the Pacific and a large crowd gathered alongside. “According to my predecessor, Carolyn Swift, one of the reasons that the older, original hotel was built near this location was because it was where the creek was shallowest,” explains Perry. “Before 1895, people had to wade across the creek with their suitcases to get to the hotel from the train depot.” 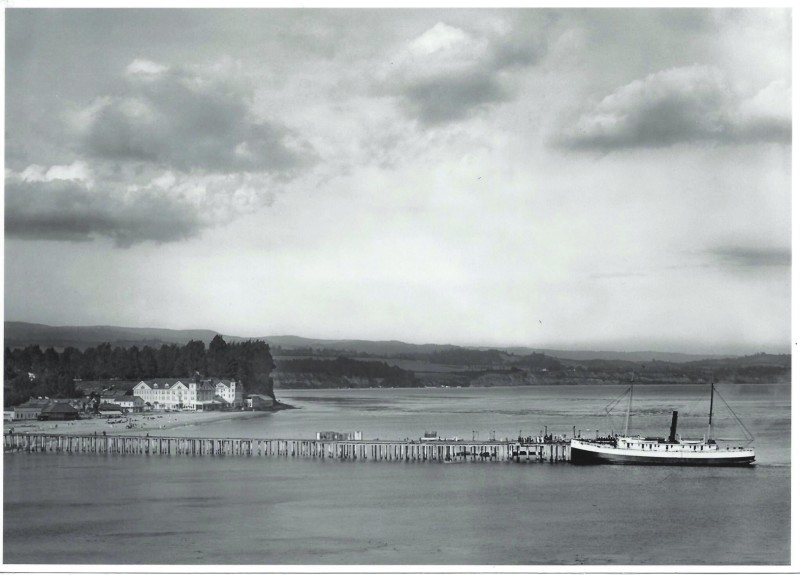 “The wharf was originally built in 1857,” says Perry. “It’s still in the same spot, but all of the wood has been replaced several times. And it’s about ready to be done again.” Perry points out that a professional photographer took all of the photos, and that they are most likely souvenir prints or enlarged postcards with multiple originals. This photo of the wharf was featured in Carolyn Swift’s book, Images of America: Capitola. 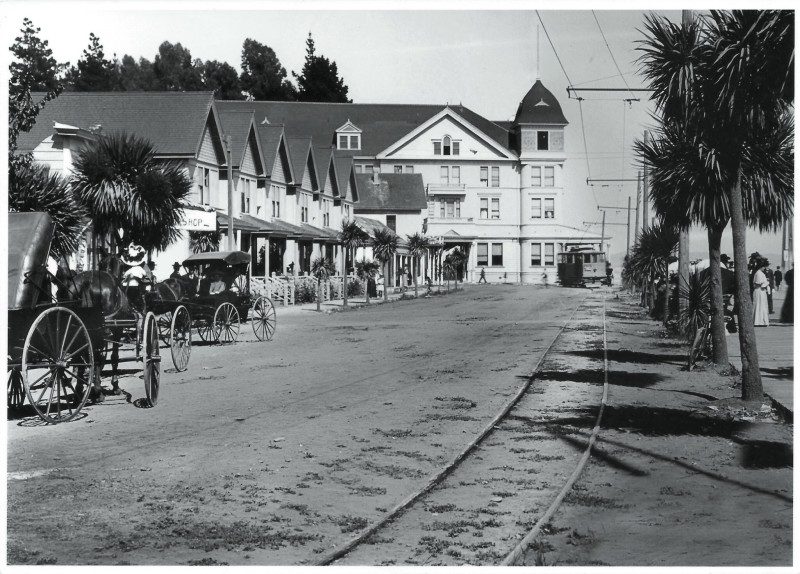 Not yet called the Esplanade, this photo shows Ocean View Avenue and the Six Sisters, which have stood since 1900. The electric streetcar took visitors to and from Santa Cruz. Although automobiles were invented, there weren’t many around, and folks still got around in horse-drawn buggies.

Here you can see two typical beachgoers blocking the sun the old-fashioned way. The baby carriage in the background looks like it may have been a challenge to pull through the sand. “This picture is before 1920, as the palm tree hasn’t been planted, but it’s after 1900 because the hotel built an additional wing, which is jutting out in the back,” Perry says. “I believe it had 160 rooms all together.”