The health benefits and importance of a sleep schedule routine. New-era lifestyle habits can lead to adverse effects on both sleep and life quality.

With bedtimes becoming a thing of the past for most Americans, sleep disorders and low energy levels are becoming more prominent. Lifestyle demands and habits many of us take for granted can disrupt rest. Not only that, but they can contribute to an increased risk for the development of neurodegenerative disorders. Having a healthy sleeping schedule is essential for performing well in everyday tasks. It also serves as a corrective measure to the harmful habits that negatively affect sleep.

The light from electronic devices at night, for example, can affect melatonin release times and levels which affect the circadian cycle. Certainly, the science behind lifestyle effects on rest patterns and quality is not black and white. Still, one can associate certain lifestyles with an increased risk for poor rest quality and the development of sleep disorders.

What Happens At Night

While we sleep the brain and body undergo a series of very important physiological processes. During this time there is repair of tissue, consolidation of memory, processing of information, clearing of toxins, and energy recovery (Foster, 2016). All processes happening during the sleep state are essential to one’s wellbeing. Disruptions between a personal rest cycle and the biological clock can lead to stress rather than rest. Stress is known to have negative effects on various aspects of health including cardiovascular, reproductive, and immune pathologies. It is important to have a sleeping cycle in sync with the biological clock to achieve maximum rest during sleep.

The Stages of Sleep

When we sleep, the brain undergoes a series of chemical and hormonal oscillations. These fluctuations help define the different stages of sleep. There are four stages of sleep, N1 (drowsy), N2 (light sleep), N3 (deep sleep), and REM (rapid eye movement). These stages cycle on and off every 20 minutes or so throughout the night (Zak, 2016). N3 (deep sleep) and REM are especially important stages of sleep when it comes to recovery and memory processing. Spatial memory is consolidated (like learning to play the guitar) during deep sleep. On the other hand, REM helps process information such as details about a lecture from class.

REM sleep is especially interesting because the brain is very active while the body remains essentially paralyzed. Neurotransmitters of wakefulness like norepinephrine and histamine are active during this state. EEG readings of REM sleep resemble those of wakefulness. It is believed that this is where lucid dreaming and sleep paralysis can happen, by becoming aware of the sleep state. 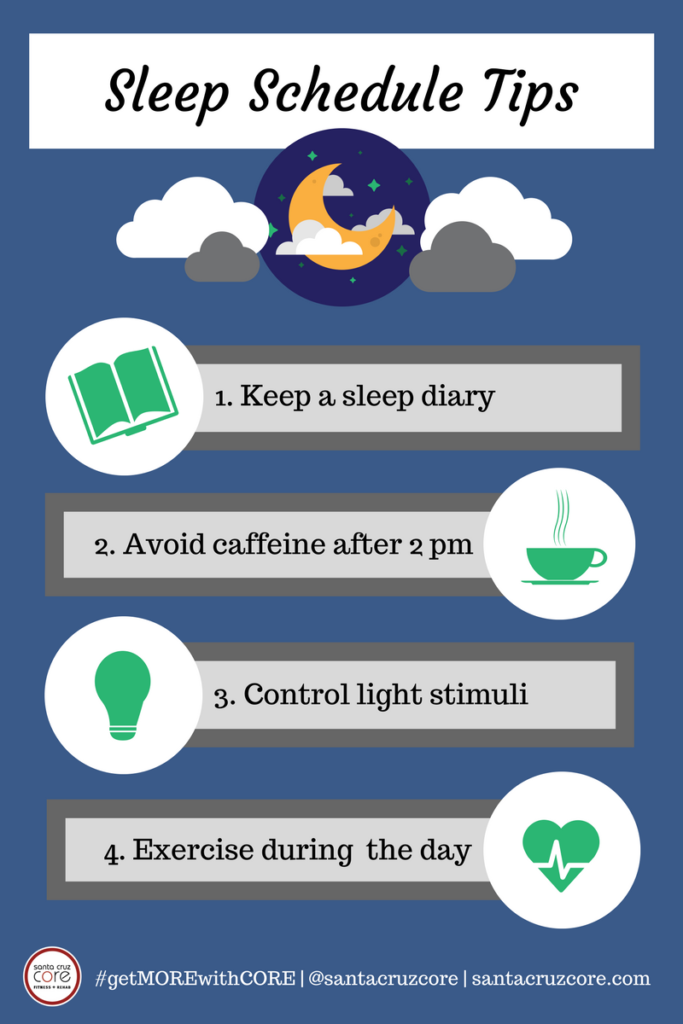 Tips for a Sleep Schedule

Keeping a sleep schedule and a bedtime can be difficult especially since most of us don’t have the leisure time we did as children. A sleeping schedule can start by switching some unhealthy habits for ones that will result in better sleep quality. Here are a few tips to help start and maintain a healthy sleeping schedule:

By keeping a diary, one can begin to understand the current cycle developed through lifestyle and habit. Understanding how a habitual rest cycle derives from a biological one is key to begin correcting it to achieve restfulness. Times at which sleepiness occurs should be recorded. This includes times in the middle of the day as well as very late at night. Records allow you to gauge any significant derivations for times of rest according to the biological clock and melatonin levels. These levels often change with age.

If the inability to maintain sleep heavily affects energy levels during the day and is affecting overall lifestyle performance, a sleep specialist should be consulted. A diary is a great way to get to know where you stand on the ability to rest and feel fresh the next morning. It can also be fun to record dreams which you remember the next day; many people find significance behind their meaning.

Stimulants of wakefulness such as caffeine can contribute to one’s inability to fall asleep, maintain asleep, or feel energized. Coffee, soda, and energy drinks especially can have an effect on one’s rest and contribute to dehydration. It is better to avoid such beverages in the afternoon and especially during the late hours of the day.

For many, watching a tv show or surfing the internet on the phone is a common habit before bed. But the light stimulation from these devices can have an effect on melatonin release and its ability to induce sleep. One should avoid light stimuli at night but not in the morning. By taking a walk outside or simply enjoying the morning sunlight from a window, the light will help reduce melatonin levels. It can also promote more alertness during the day.

Exercise During the Day:

Exercise during morning hours can help regulate hormones and energy levels to promote a better night’s rest. Caffeine in morning hours can also help regulate energy levels to promote alertness during the day and sleepiness at night. Exercising during late hours may aggravate one’s ability to fall asleep if problems already exist. Exercise releases a series of hormones to promote alertness like cortisol and norepinephrine, elevated levels of these hormones can induce wakefulness rather than sleepiness during bed hours.

Do you have more questions about wellness or how to maintain a sleep schedule? Stop by Santa Cruz CORE and speak to our nutritionists about the effects of caffeine, or enjoy a fitness session with one of our many personal trainers to help promote a better night’s rest! We want to help you live to the fullest, whether it be getting out of pain or simply having a fulfilling night’s sleep!

Santa Cruz Waves readers get our local offer rates for an Intro Chiropractic Assessment + Treatment plus get a 1 hour Swedish Massage for just $79!
Click here and be sure to mention this offer or call us in Santa Cruz and now Watsonville
831-425-9500 • info@santacruzcore.com 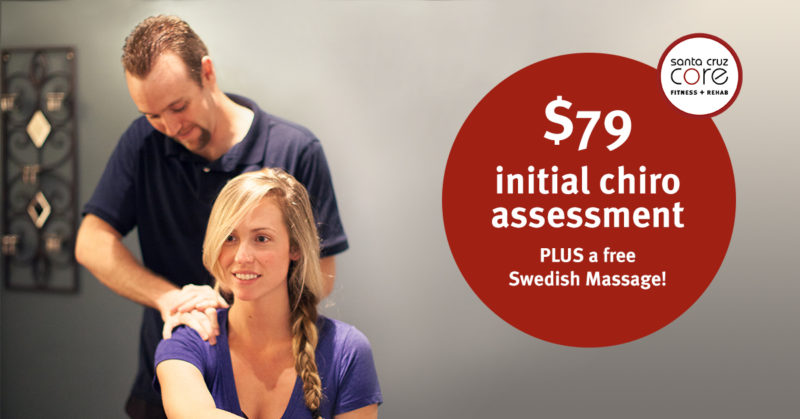