It’s hard to imagine today, but Santa Cruz was once crammed with billboards—lots and lots of billboards. Today, there are only two in the county: one on Highway 17 that typically features a car ad, and another near the Mystery Spot that permanently advertises the attraction. These are the only exceptions to local ordinances that now prohibit billboards and keep Santa Cruz beautiful in the process.

But back when there were still billboards everywhere, a clandestine network of guerilla billboard artists called Truth in Advertising (TIA) operated in the dead of night, changing select billboard ads into social and political commentary. From 1980 to 1985, TIA’s clever alterations were precise and professional in an era when Photoshop hadn’t been invented and graphics were created methodically by hand. The billboards would appear to be genuine displays until their re-crafted messages were read carefully. 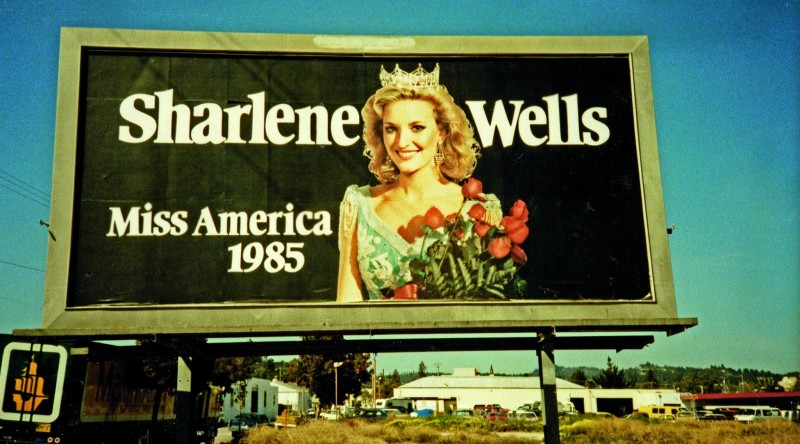 BEFORE & AFTER. On March 27,1985 Truth in Advertising joined local protests of the Miss America pageant, which was then held in Santa Cruz, by changing the original billboard from “Miss America” to “Myth America” 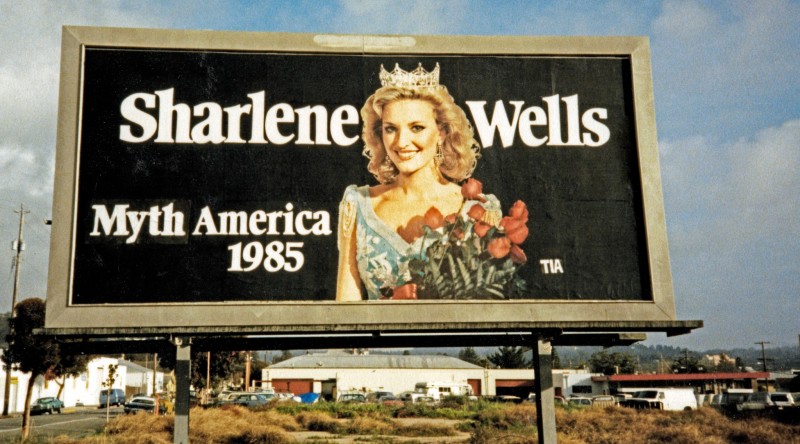 Santa Cruz resident and TIA founder Bob Stayton never set out to be a guerilla billboard artist. He simply found himself caught up in the events of the day and found a way to react to them.

The tipping point for Stayton, who stayed in Santa Cruz after earning a graduate degree in physics from UC Santa Cruz in 1978, was a beer ad near his then-neighborhood near May Avenue.

“There was a billboard on Ocean Street just over from our house that was for Coors,” says Stayton. “I’d lived in Colorado and so had two of my housemates at the time. Coors was always anti-union; they were bad guys in Colorado … so we had this motivation to do something and I had seen that other people had done billboard art.”

The initial operation was not a success. Late one night, Stayton and TIA members used double-sided tape to carefully put up the strips with their edits to the Coors ad. But when they drove by to admire their handiwork the next day, they saw that it had fallen down after the sun melted the tape’s glue.

“The funny part was my girlfriend’s mother was visiting us at the time,” says Stayton. “She actually was the one that suggested that we use wallpaper paste.” Its 20-minute drying time allowed them to apply the glue at home, fold the strips in half and then unpeel and apply them when they reached the billboard, allowing them to successfully change the ad.

TIA had two primary goals: to get people to think outside of the corporate logo box and to raise awareness of important issues that members felt were not getting enough play in the media

While a few of the targets of their protests now seem dated at first glance, many of the same issues persist today—just with different names and places. In 1980, Ronald Reagan was elected president of the United States, Russia was called the Soviet Union, and the U.S. was flexing its military might in Central America. To many, the possibility of war and even nuclear war seemed real. The feminist movement was active in Santa Cruz, where the Miss California Pageant held at the Cocoanut Grove was a frequent target for protests.

“We raised social issues that the media at the time would gloss over,” says Stayton. “The El Salvador situation was terrible. The U.S. [military] was in El Salvador, but no one would admit it. But it was clearly going on.”

Their billboard work started getting media attention of its own. When TIA altered a Triumph cigarette ad to proclaim “Triumph for democracy: U.S. out of El Salvador,” two weeks later a picture of the altered billboard appeared on the front page of the Los Angeles Times next to a story about President Reagan and the U.S. Navy. A photo of a Carlton cigarette billboard converted by TIA to an anti-war message was included in a November 1981 edition of the Phoenix—a now-defunct Santa Cruz alternative weekly—in its coverage of the city’s overwhelming vote in favor of a resolution to end U.S. military aid to the Salvadoran government. Good Times Weekly, the Santa Cruz Sentinel, and Bruce Bratton of Santa Cruz Express all covered TIA’s billboard adventures.

The nighttime billboard operation grew more sophisticated and the crew set up a lookout system to watch for police and to ask curious onlookers to please move on so as not to draw attention. The closest they came to being caught was when a Santa Cruz police car cruised by as Stayton was serving as lookout at a billboard on Cedar Street, near what today is Café Bene but at the time was Cymbaline Records. Stayton immediately yelled out for his lost dog Mario, which was the signal to the others that they were in danger of being spotted. The police officer stopped and helped Stayton look for Mario, who didn’t actually exist. “When [my friends] heard my call, they jumped down,” says Stayton. “We waited 15 minutes and then they went back up and finished the job.” In TIA’s five-year lifespan, the billboard companies never filed a police complaint and no one was ever arrested. 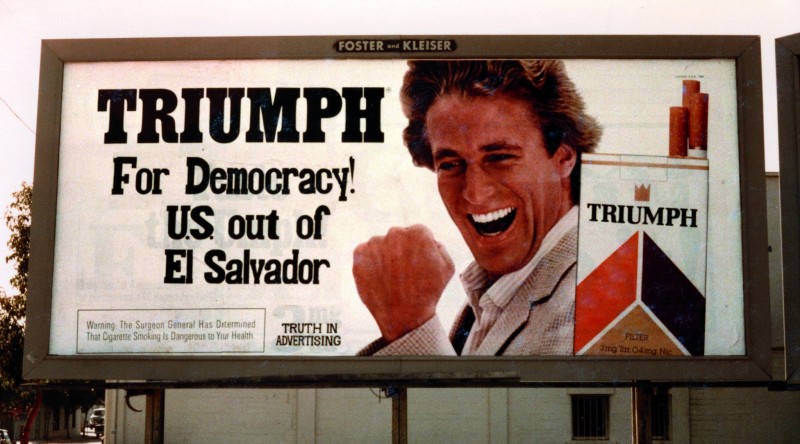 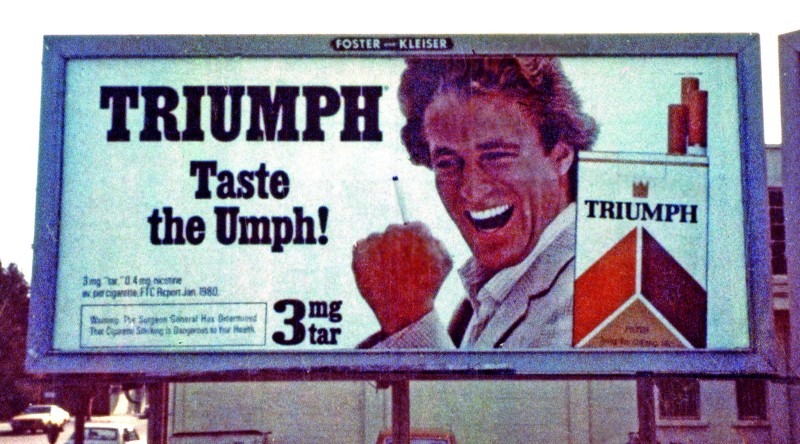 On Feb. 15, 1981, this billboard at the corner of Center and Cedar streets in downtown Santa Cruz was modified to make the above political statement. A photo of the revised billboard landed on the front page of the Los Angeles Times.

Sex in advertising was an important target for TIA that Stayton points to as another timeless issue, citing the recent spate of sexual harassment and sexual abuse reports that have surfaced. TIA once changed a suntan lotion ad featuring a bikini-clad woman and a tiger from “Tropical Blend. The Savage Tan” to “Typical Blend. Sex in Ads.” And a billboard at Center and Washington streets proclaiming Sharlene Wells as Miss America 1985 was changed to read “Myth America.” (Local feminists had for years held “Myth California” counter-pageants to protest the Miss California pageant in Santa Cruz, which eventually caused it to relocate away from the city.)

Stayton chuckles as he says that TIA’s actions had the unintended effect of causing people to look at billboards more often, to see if they had been altered. Their run of billboard doctoring ended when the City of Santa Cruz successfully defended in court its longstanding desire to prohibit billboards and they were taken down in 1986. “We had nothing to do with the billboard ban,” say Stayton. “The billboard ban had begun a decade before we even started, but then it got tied up in court.”

Stayton sees parallels between TIA’s heyday and the present day political climate, and he hopes that people remember that they can confront and resist policies they disagree with, whether through social media or other means.

“I decided when Trump was elected to start re-promoting Truth in Advertising,” says Stayton, who launched a TIA website at sagehill.net/tia and also documented their billboard work on Facebook in the wake of the 2016 election. “Because this whole idea of fake news and corporate control has gotten so bad [again] that I wanted people to think of [how] they can get alternative messages out there.”

One comment on “Remember When… a covert group of guerrilla artists took on U.S. government policies, corporate advertising and Santa Cruz billboards?”