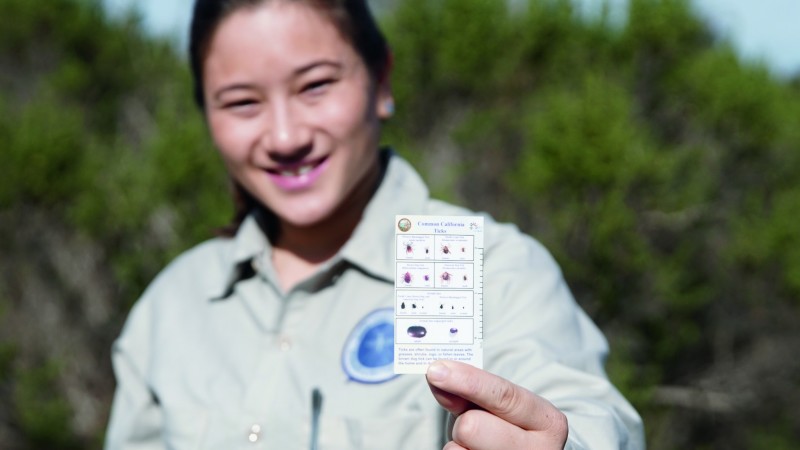 In country music star Brad Paisley’s hit song, “Ticks,” he describes a sensuous scenario; one where, under the moonlight, he’d like to kiss his sweetie-pie “way back in the sticks.”

He would “like to walk you through a field of wildflowers,” and—he sings with a twang—he’d “like to check you for ticks.”

Paisley’s desire to prowl across his lover’s skin searching for the engorged abdomens of blood-hungry parasites may seem like a romantic game to play after frolicking through fields of flowers, but the tactic could also be a great strategy for preventing Lyme disease.

And if you are left to your own devices after hiking your favorite trail and want to be certain no ticks have burrowed their thirsty chops into your body, professionals suggest stripping down and taking a nice hot shower.

“The best way to remove a tick is to grab them with tweezers right at the base of where they’re in your skin, and pull straight up. They should stay in tact,” says Amanda Paulsen, an ecologist for Santa Cruz County’s Mosquito and Vector Control unit.

Nobody likes the notion of having a tick attaching itself to their epidermis, let alone the prospect of an incurable illness such as Lyme disease, but as spring rolls around and the sun comes out, the need to get outside and enjoy nature overwhelms any fear of creepy crawlers. It’s best to venture into the great outdoors equipped with the knowledge to mitigate risks. So, what do you need to know about ticks and Lyme disease in Santa Cruz County? We’re here to help you out.

The best way to prevent tick-related disease from transferring is by preventing them from attaching in the first place, says Paulsen. What’s the best way to do that? Wear tall socks and long pants. Repellents are also a great preventive measure. Sprays and ointments with at least 20 percent DEET applied to clothing as well as Permethrin, which kills ticks as they travel across fabric, is a great safety measure.

Another important tip is to stay on the trails when hiking, she says. Ticks are often found where tall grass begins to sprout just off of trails, especially where there is lots of leaf litter. They also gravitate toward logs near paths, so reconsider taking your next rest on a fallen tree.

How often are people in Santa Cruz County contracting Lyme disease from ticks? Paulsen says there were 15 confirmed cases in 2017, and according to Santa Cruz County Health Services, there are an average of about eight new cases each year. She says those numbers have not varied considerably each year.

Which tick should you be the most concerned about? A little critter that goes by the name Western Black-legged tick is the “primary vector of the bacteria that causes Lyme disease in California,” Paulsen says. If you do remove a tick, you can put it in a plastic bag and give if to the Santa Cruz County Mosquito and Vector Control team. They will identify it for you, but refrain from actually testing the tick for Lyme. Paulsen explains that just because a tick is positive for Lyme, it does not mean the person it bites is also.

A good indicator of risk is how long the tick has been attached to the body, she says. Ticks that are removed within 24 hours of attaching themselves pose a much lower risk of transmission.

“If the tick is engorged, indicating it’s had sufficient time to take a ‘blood meal,’ your risks may be higher,” Paulsen says.

The symptoms to be aware of are similar to the flu, so if you begin to feel very sick following a hike, or after finding a tick in your skin, consider seeking medical attention—and keeping the tick.

It is also critical to check your children for ticks as well as pets. The county recommends checking dogs continuously for up to three days following a stroll through areas likely populated with ticks.

Plus, “just because the tick does not latch on to you, that doesn’t mean it can’t hitch a ride home, crawl off the animal and then crawl on to you,” Paulsen advises.

Tara DiMilia is a consultant for the Bay Area Lyme Foundation, a leading organization in the fight to prevent Lyme disease. She chimes in to debunk a few myths about Lyme disease in California.

MYTH: There is no risk in California.

In truth, Lyme disease has been identified in every state, and a recent study showed that ticks carrying Borrelia burgorferi—the bacteria that causes Lyme disease—are widespread in the San Francisco Bay Area year-round.

While an estimated 329,000 Americans are diagnosed with Lyme disease each year, statistics show that as many as 20 percent of patients continue to exhibit symptoms even after antibiotic treatment. A million Americans are estimated to suffer from the condition.

MYTH: Everyone with Lyme disease gets the “bull’s-eye” rash.

While many associate the indication for Lyme disease as a ring-shaped skin rash, not everyone who contracts the disease exhibits those symptoms. The Centers for Disease Control and Prevention (CDC) estimate that only 70 percent of people who contract Lyme will show the telltale rash.

MYTH: If the test is negative, you don’t have Lyme.

Not so fast. The current “gold standard” diagnostic for Lyme disease is a two-tiered blood test requiring a positive ELISA result. The ELISA measures infection-fighting or memory antibodies against Borrelia burgdorferi, and it misses up to 60 percent of acute cases of Lyme when antibodies may not be high enough to detect.

Found a tick? The county will identify it for you. Depending on the species, their staff will provide a consultation and information about disease risks.