… Surf clubs were in their heyday? Local groups, including the new the Santa Cruz Board Riders Club, are carrying on the tradition. 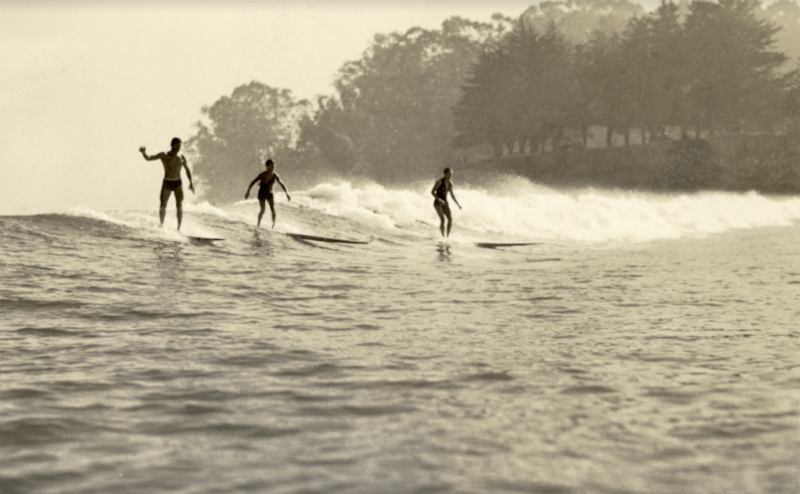 In 1985, three years after the Santa Cruz Longboard Union (SCLU) was formed, an informal surf contest between the SCLU and the Malibu Surf Club was set to take place on Memorial Day at the Lane.

Local Santa Cruz surfers were excited to share with their friendly rivals a rare sandbar at Cowell’s that stretched from Monterey Street to the Dream Inn, and were ready to greet them with plenty of libations. “That sandbar had not appeared since 1978, when we named it the Cowell’s-Kiki, and it rose again, along with a barrage of epic waves for the beginning of a friendly longboard contest with the legends of Malibu,” says SCLU member Kim Stoner. 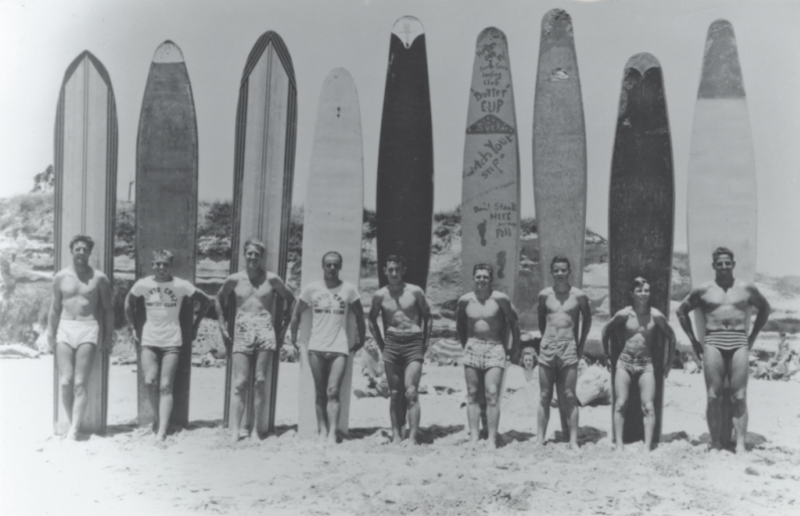 Those legends, however, did not show up, which hardly disappointed anyone from the SCLU. They quickly calculated that they would not have to share any of their ice-cold beer, nor any of the swell that was running across the sandbar that day.

The SCLU board members decided to make the Memorial Day Longboard Invitational an ongoing event, and this May marked the 33rd anniversary of one of California’s longest-running surf contests.

Back in those days, and in the decades prior, local surf clubs were fixtures of the sport in surf towns. Local surf historian Howard “Boots” McGhee says the clubs can be traced back to the Outrigger and Surfing Club, founded in 1908 in Hawaii, and to the Palos Verdes club, which, in 1930, became one of the first clubs in California. “Then a wave of clubs ensued,” McGhee says. When they became popular locally, he says membership was difficult to come by. The Rio Surfing Organization and the Moana Makani (or Manresa State Beach Surf Club) were hardly about to let a transplant kid from Berkeley step into their surf, but they made an exception for McGhee. “Let’s just say that I had the best goods, and leave it at that,” he says.

But even though surfing has continued to grow in popularity in recent years, the worldwide Coalition of Surfing Clubs has said that clubs themselves are a dying breed. McGhee, too, says they are endangered: “It is sad to say, unless there is an influx of youth, the traditional surf clubs will all soon go the way of the dinosaur and slowly become extinct,” he says. 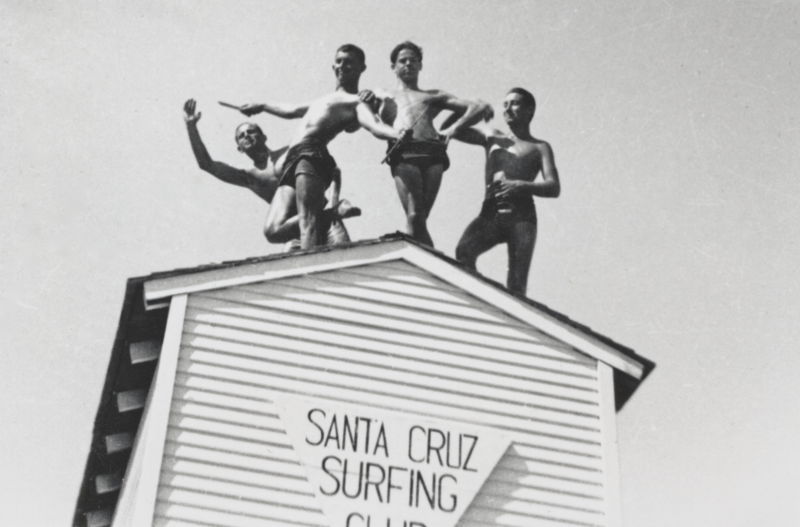 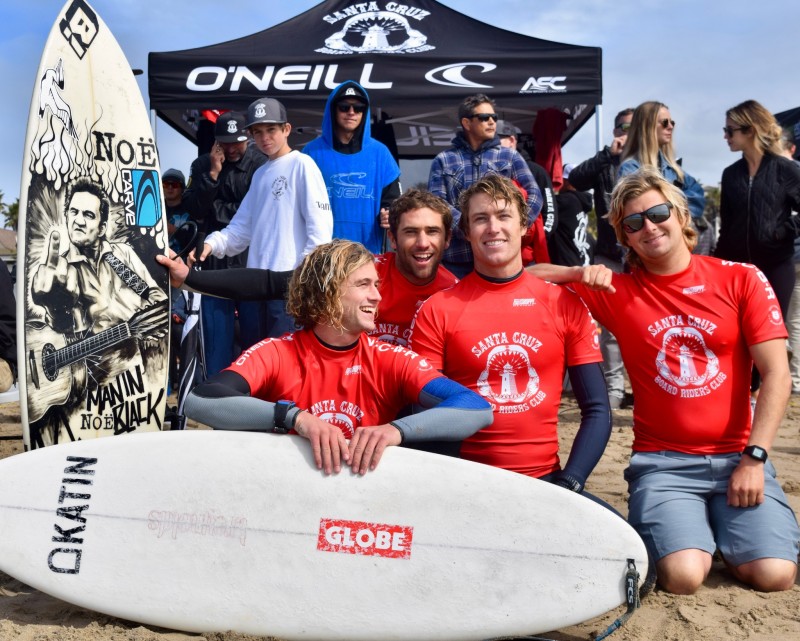 If local groups have anything to say about it, the surf club, as an institution, will continue to be a Santa Cruz tradition. The ranks of local clubs like the SCLU and Big Stick Surfing Association recently saw the addition of Santa Cruz Board Riders Club (SCBRC), which formed in late 2017, and which I help run.

SCBRC is a nonprofit that has set out to destigmatize surfing in Santa Cruz by establishing a more unified community. It also focuses on the benefits of friendly competition, environmental efforts, and the ability to utilize surfing as a means to get youth out of unfortunate circumstances.

SCBRC is for Santa Cruz surfers, by Santa Cruz surfers. Shane Skelton, the O’Neill wetsuits sales manager who kickstarted the formation of the club last year, says its purpose is multifold. “Beyond competing against other towns, the mission (of SCBRC) is to help get the youth in the water, no matter what their background or financial status.” On June 23, SCBRC will host an “Open Surf for Kids” event, where any kid in Santa Cruz who would like to learn to surf can receive a lesson and gear for the day, free of cost.

From local pros like Nat Young to kids that have not yet had the opportunity surf, the club is welcome to everyone. Young, a former WSL Championship Tour competitor, has this to say of the new effort: “Hopefully it brings a type of camaraderie between everyone—between people in the water and people around town—by bringing everyone together in different ways, [including] ways this town can benefit from, like beach clean ups, etc.”

While forming the club, Skelton enlisted Darryl “Flea” Virostko for help. “It can make [the community] stronger from east to west,” Virostko says. “There’s so many people in the water, it’s good to have a club that can watch after each other and talk things out that come up.”

Anthony Ruffo served as the third kingpin in forming the club. “Club means unity,” Ruffo shares. “It’s important to pass on history and to be united and to do this for Santa Cruz.” Shortly after that trifecta committed to forming the nonprofit, local surfers including Brian Kilpatrick, Matt Myers, John Slebir, Jon Sisk, and myself joined to begin taking actions towards the Club’s mission. 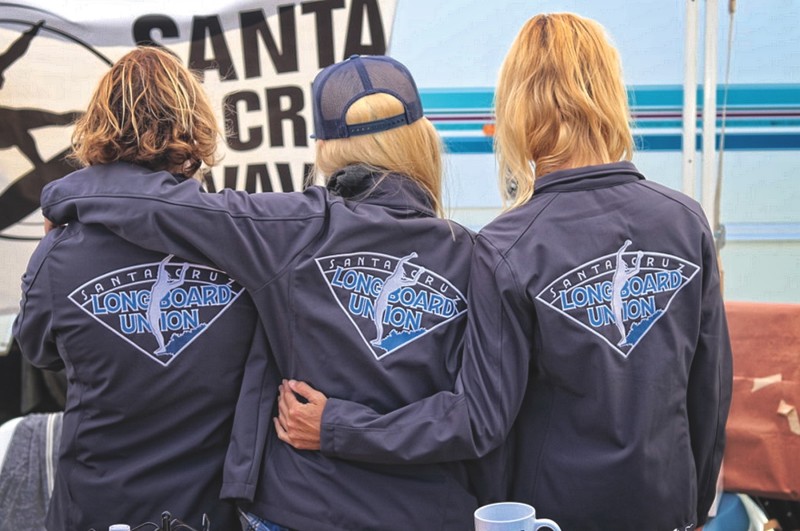 SCBRC’s popularity spread quickly after its formation. By this spring, dozens of club members traveled to Huntington Beach together to compete in one of multiple West Coast Board Rider competitions that happen throughout the year.

On June 7, SCBRC will host six other West Coast Board Rider teams for a competition at Steamer Lane. “Competing as a team is what I’m looking forward to the most,” says SCBRC member and Swellies winner Autumn Hays, “not just [competing] for myself.” SCBRC also hosts social events like barbecues, surf movie nights, and quarterly beach cleanups (the next of which is schedule for July 28 in Midtown).

“I think it will help to bridge generations and unite the Eastside and Westside, thereby creating mentors and positive life examples for the youth,” adds Skelton.