Three local pop-ups that are dishing up global flavors 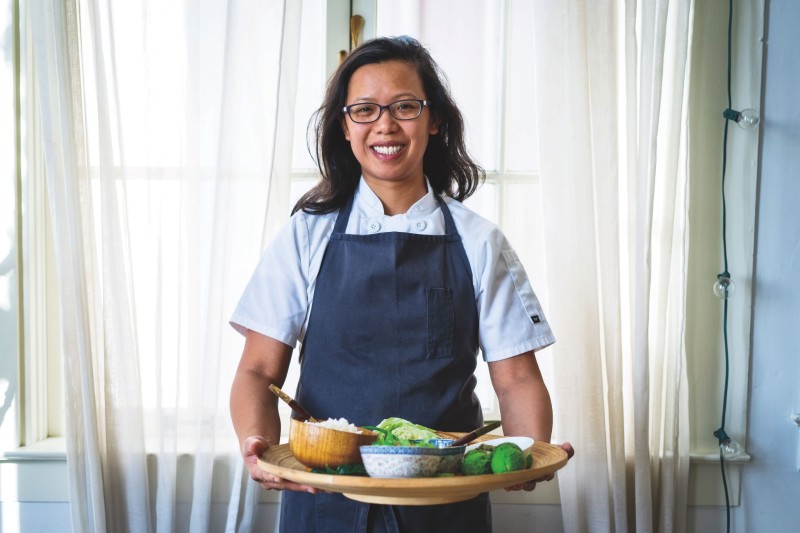 Imagine traveling the world with the purpose of tasting food in all manner of exotic locale, meeting international chefs up close as they prepare mouth-watering meals they first experienced in their childhoods and later carefully perfected to share with others. While most of us don’t have the budget for this ultimate foodie fantasy, we can experience the next best thing: far-flung flavors right here in our own backyard. Santa Cruz is brimming with chefs who bring the food traditions of their homelands to local plates and palates—such as these three up-and-comers who are sharing their cultural roots with exciting local pop-ups. 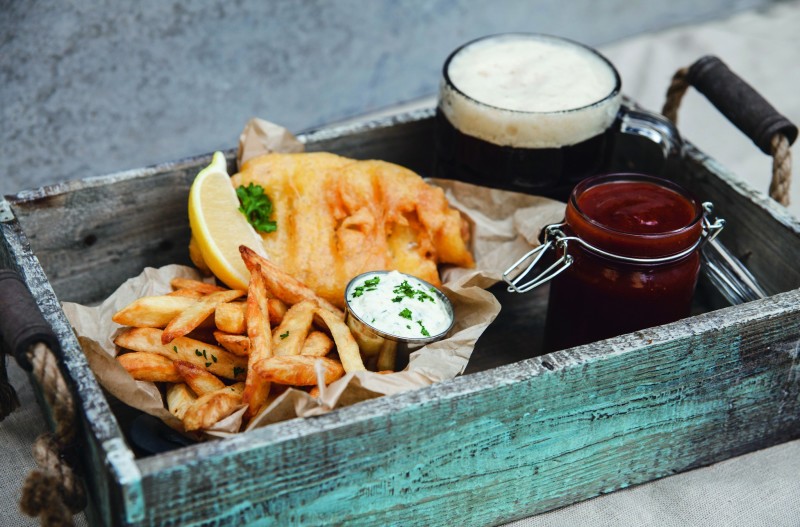 Scrumptious Fish and Chips owner Tim Korinth loves all the usual things about living in Santa Cruz. But one of the things he always missed locally was an authentic batch of fish and chips. Korinth and his wife and co-owner of Scrumptious, Helen Gilbert-Korinth, moved here in 2000 from the small village of Dedham, England, about an hour northeast of London.

“After awhile you get certain cravings for food and beverages,” says Korinth. “There’s always that one craving that might come out as you get into the weekend like, ‘I wish I could have a real good portion of fish and chips.’ But wherever we went [for fish and chips] we were always disappointed, whether it was a restaurant or in a pub, it just never matched.”

So Korinth and his wife set out to recreate that taste themselves. Korinth grew up watching his grandmother make authentic, fresh fish and chips. The key, he explains, is to make everything from scratch with fresh and local ingredients.

It starts with good fish, and Korinth typically uses Pacific cod purchased locally from Stagnaro Bros. Korinth only uses sustainable fish that meet the Monterey Bay Aquarium’s Seafood Watch criteria. He also uses locally sourced beer to make the batter for the fish, and tartar sauce made from scratch.

Korinth, who was born in Germany but grew up in England, also makes a curry and other secret ingredients-flavored ketchup sauce based on an authentic German sauce recipe. Finally, he employs the traditional twice-cooked method to prepare the chips, because regular French-frying just won’t do. The potatoes are peeled and hand-cut, soaked overnight to remove excess starch, fired at a low temperature to soften the potato, and finally cooked at a higher temperature to achieve a golden crunchy exterior with a fluffy interior.

“I still go to the UK once or twice a year and I’ve been able to compare what I did [here] to what they eat there,” says Korinth. “It’s [right] up there: I would say it’s pretty accurate … There are a few tweaks to the ingredients, but overall it’s pretty authentic.”

Find where Scrumptious Fish and Chips will be serving next at scrumptiousfc.com. 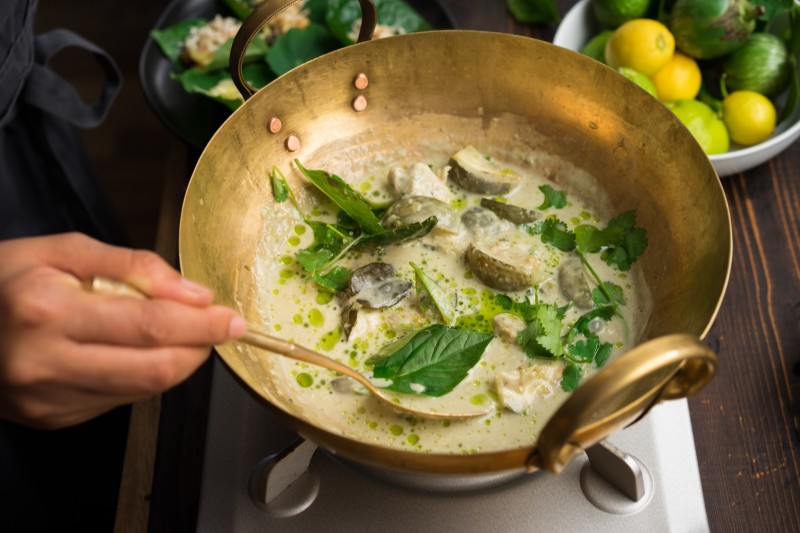 Hanloh Thai Chef Lalita Kaewsawang has been cooking since she was 8 years old, when her grandmother first dazzled her taste buds and piqued her interest by preparing delicious homemade Thai curries. She also learned the art of cooking from her father and her neighbors in Nonthaburi, Thailand, a small city along the Chao Phraya River north of Bangkok, where her grandmother would sometimes give her two 10-baht coins to buy dinner from one of the many street vendors nearby.

Kaewsawang left Thailand to attend high school and then college in the United States. Still in love with cooking, she ran an informal pop-up restaurant out of her dorm room at Wesleyan University in Connecticut. She has cooked professionally in cities all over the country and in 2017 she created Hanloh, naming her Thai-style pop-ups in Santa Cruz and the San Francisco Bay Area after a common Thai greeting.

While she is an expert in cooking a wide variety of Thai food, her grandmother’s curries have a special place in her heart, and in her kitchen.

“My grandmother used to make her own curry paste with stone mortar and pestle,” she says. “Now I use both the traditional technique for small parties and resort to electric [kitchen] tools for large batches.”

Each type of curry is prepared differently. So where she’ll use herbs roasted over an open fire or in an oven for her khao soi paste, her green curry herbs are blended fresh and then brought to a boil in a coconut broth.

One challenge of cooking exotic foods in a new land is being able to find the right ingredients, and Kaewsawang is constantly seeking them out. She was thrilled last year, for example, when a Pleasure Point orchard grower contacted her to let her know they had Makrut trees with locally grown Kaffir limes.

“I was so happy because I tried reaching out to so many folks and none of my leads were working out,” says Kaewsawang. “Makrut lime is essential to Thai cooking and to find them grown locally is a blessing.” 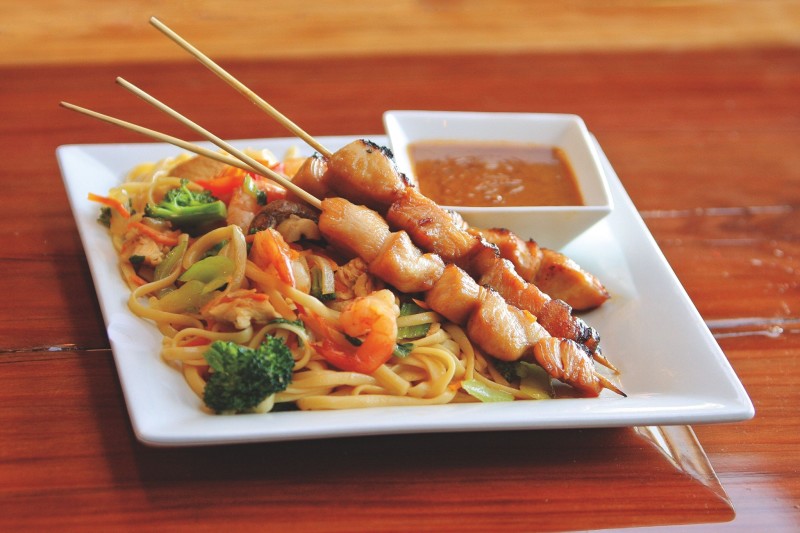 With each of her parents being of both Dutch and Indonesian extraction, it’s not surprising that Michelle McKay developed a love of Dutch-Indo cuisine. Now she’s dishing up Dutch-Indo inspired fare for the Santa Cruz community through Efi’s (pronounced Afee’s), her catering and pop-up business that is named after her mother.

“Dutch-Indo food is one of the oldest fusion cuisines. It developed over a period of more than 350 years,” explains McKay. “The Dutch colonized what was then called the Dutch-East Indies before Indonesian independence after World War II.”

Her parents left Indonesia as refugees after independence, moved to the Netherlands and eventually settled in the United States, where McKay is now happy to be sharing Dutch-Indo fusion food locally. “There is such a cultural assortment of good food popping up all around Santa Cruz and I am happy to be a part of [that] growing community,” she says.

The U.S.-born McKay is the youngest of eight siblings, and as her parents were already retired as she grew up, she spent much of her childhood watching them prepare meals for the family.

Starting with a style that’s already a fusion makes McKay unafraid to experiment—she often gives her food a local twist or combines it with food from other cultures. “I can make Rendang over rice,” the chef says, “but when you take Rendang and turn it into a taco with a cucumber salsa and a coconut-cream sauce … or sweet soy pork belly in a folded bao bun, [it’s] mouthwatering.”