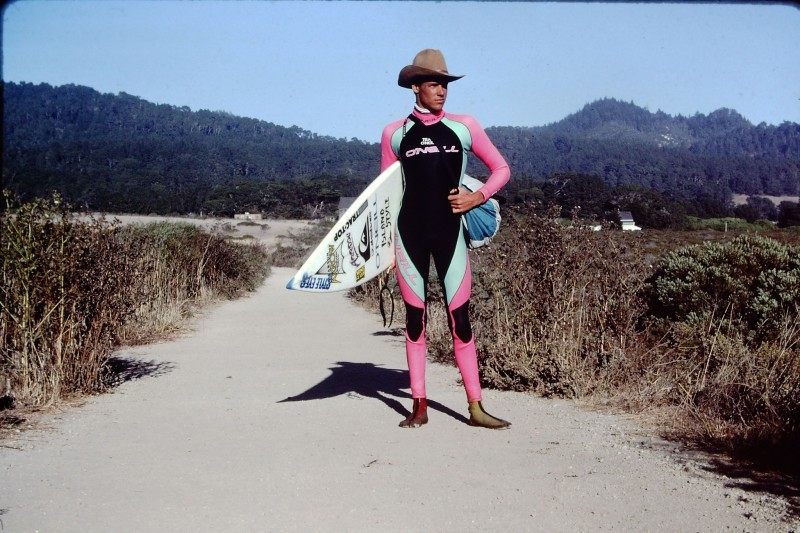 For the better part of the 1990s, observers on the bluffs and sands of Santa Cruz would often witness an odd phenomenon in the water: surfers in brightly colored wetsuits paddling laps around a man wearing a helmet and lugging a heavy water-housed camera.

Instead of dodging each other, surfer and photographer would choreograph a delicate and dangerous dance, striving to converge at a singular point. Once they got to that optimum point of contact, the surfer might launch an air or lay down a carve—preferably centimeters from the photographer’s fisheye lens. If the stars aligned, they could capture a unique, in-your-face, skateboard-inspired angle that had never been seen before. This was the Tony Roberts method.

Roberts, known to many simply as “T” or “TR”, was a magnetic figure, drawing all local surfers worth their salt to vie for a spot in his lens’ frame. “You’d surf to that imaginary box Tony was swimming toward—a little, four-by-four-foot imaginary box,” recalls local surfer Nate Acker, who now resides in San Francisco. “If you could do your thing in that box—air, barrel, or whatever—boom! You know you scored with T.” 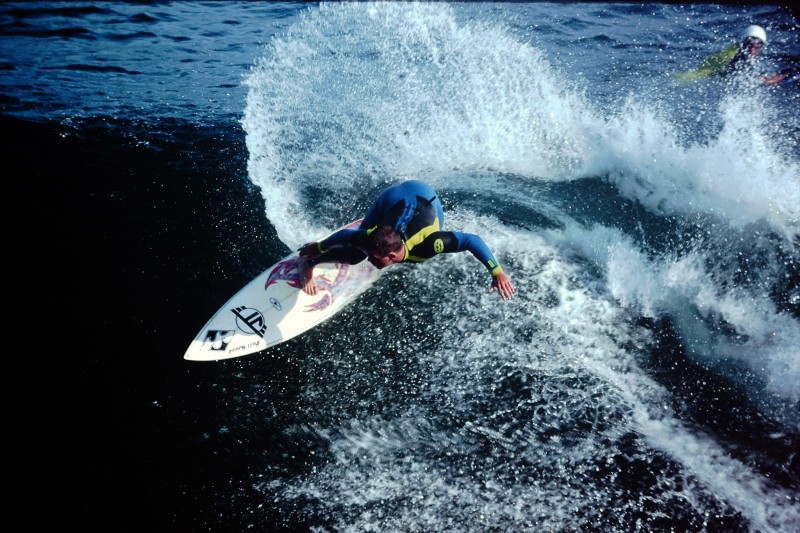 Surfers elbowing their way into Roberts’ eyeline could find themselves in magazines like Surfing Magazine and Transworld Surf, or in one of Roberts’ surf films, such as Progression Sessions and Above and Beyond. The Santa Cruz-bred photographer and cinematographer’s work was a driving force in exposing the surf world to Santa Cruz’s technical surfing pioneers. This exposure helped the first wave of local, professional “freesurfers” (surfers who make their living working with elite photographers, rather than competing) secure paid sponsorships and a platform on which to share their skills with the surf world.

Growing up in Capitola, Roberts was equally passionate about surfing and skateboarding. Influenced by his parents, who always had cameras lying around, Roberts also caught the photography bug. As his interest grew into an obsession, he frequented swap meets and the flea market, looking to score old cameras. He began shooting Super 8mm movies, cutting and splicing the edits to show them on a projector at his house and, later, in Grange Halls across town.

As for his subjects, he didn’t have to look far. “I learned to shoot with my friends—guys like Adam Replogle, Chris Gallagher, Steve Price, Danny Roman, and Marcel Soros,” Roberts says. “I was lucky to have had so many great surfers around me when I got into it.”

With time, Roberts began picking up his camera more and his boards less. “The thing people should know about Tony,” says Replogle, “is that he was, and still is, a phenomenal skater and surfer. So for him to make the decision early on to be the guy behind the lens, not in front of it, was unbelievable, considering how talented he was.” 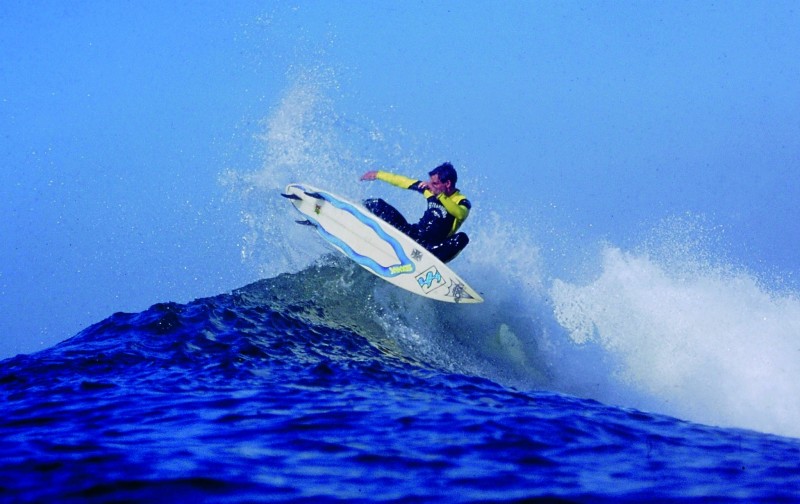 By the mid ’90s, Roberts was a bona fide professional lensmen with a reputation for working closely with surfers and skaters, and a knack for nailing unheard-of angles. Roberts credits photographer J. Grant Brittian’s skate images as a huge inspiration for his water photography, leading him to experiment with angles that would capture the action and movements he knew made a good skate shot.

At the time, water photography was a cumbersome, frustrating, and dangerous endeavor that rarely resulted in magazine-worthy shots, yet Roberts persisted, sacrificing his own dreams of being a professional surfer to document the explosion of progression that was happening around him.

His work captured the efforts of a colorful pack of talents that included Replogle, Darryl “Flea” Virostko, Jason “Ratboy” Collins, Shawn “Barney” Barron, Peter Mel, Nate and Zach Acker, and Anthony Ruffo.. Eastsiders, Westsiders—they all wanted to be a part of Roberts’ vision, and a competitive camaraderie was born amongst them. 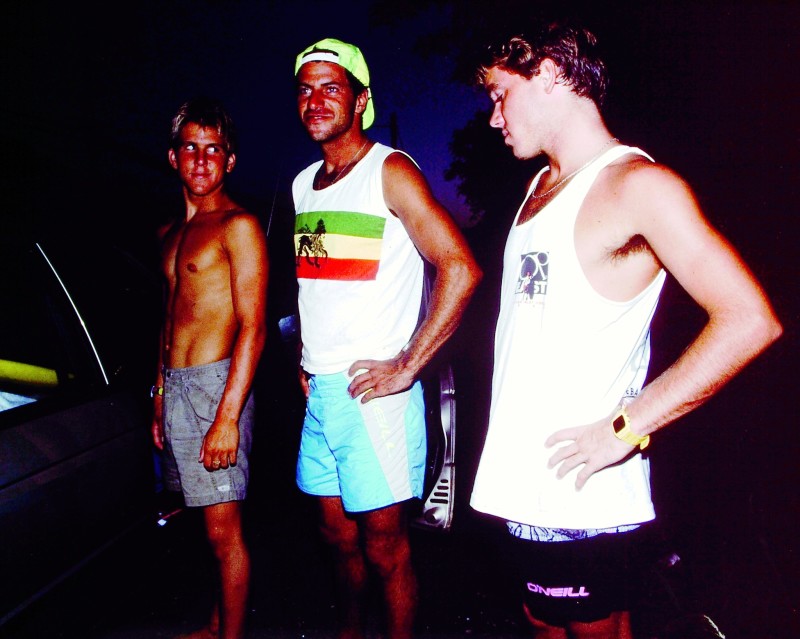 “If TR was shooting, all the boys wanted to get ‘the shot,’” says Ruffo. “Be it the biggest air, craziest turn, or hollowest tube, you had to turn it up with Tony. It was crazy competitive, but in a good way.”

After the golden-hour morning lighting faded, Roberts would swim to shore and swap the camera for a tripod and video camera.

“This is when the real progression went down,” recalls Nate Acker. “Instead of surfing to ‘the box,’ you looked down the line and said, ‘OK, I’m gonna get my flow on,’ linking everything together with power and style.”

At the time, Larry “Flame” Moore was photo editor of Surfing Magazine. Flame favored the front-lit, sparkly “studio” conditions like those he’d grown accustomed to at his home turf, Salt Creek in Dana Point, Calif. Although they felt stifled by these restrictions, Roberts and the crew played the game, working endlessly to appease Flame, while creating motion pictures and artsy, backlit images on the side.

Despite the hard work, it was surprisingly difficult for Roberts to get his work published in the early ’90s. It wasn’t until Nick Carroll, an Australian-born surf journalist and brother to two-time world champ Tom Carroll, took over as editor of Surfing in 1993 that Roberts broke through.

“I think I responded both to TR’s energy and great photography, and also to the sense I’ve always had that the [Santa Cruz] crew are a lot like many Australian surfing crews I’d known … in that they weren’t super slick, but they were themselves, and they were trying to push the sport pretty hard in a lot of ways,” Nick Carroll tells Waves. “Real power surfers and innovators who were unashamedly proud of themselves. They weren’t stuck in some post-Miki Dora rut, trying to figure out how to get a job at Quiksilver, or pretending to be ‘soul surfers,’ or whatever. They were a bit loose and real individuals.” 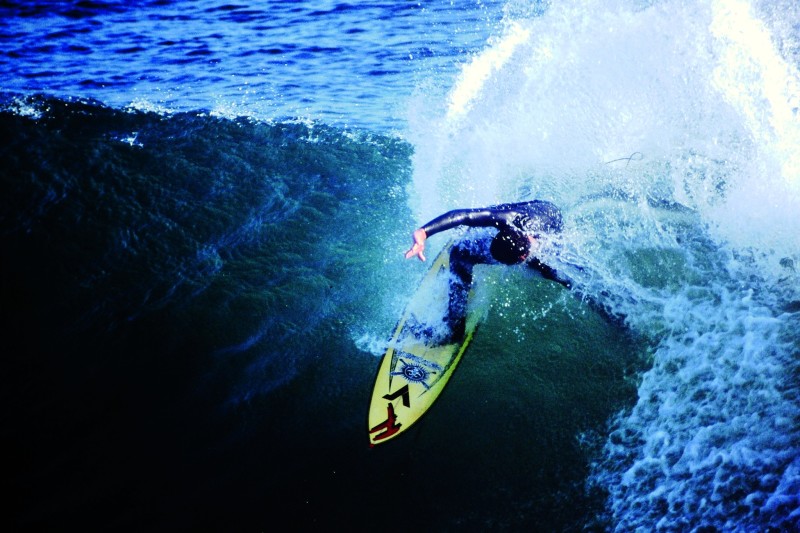 Now that Roberts had the direct attention and support of a globally respected writer and editor, he released the hounds. Soon, Carroll arranged to do a 20-page cover story on Santa Cruz, featuring profiles and portraits of the local guys. Roberts timed the release of his new video series, Mental Surfing parts one and two, with the issue’s publication. “When we introduced that footage, people were trippin’,” he says.

If the magazine photos were hints at the level of talent in Santa Cruz, the videos were undeniable proof.

“At that point, we started getting a lot of press,” says Roberts. “My movies were coming out once a year and became very popular. It was our combined efforts that put Santa Cruz on the map as a performance-surfing center.”

After focusing on his career for so long, Roberts’ drive and focus began to wear thin, especially once he started getting commercial jobs, notably as a cameraman on MTV’s first season of The Real World in San Francisco.

“It got to the point that it actually was ruining my life,” he says. “As a surfer, if you aren’t surfing, your soul just kinda rots, and you become less positive in your day to day life”.

When the grind grew unbearable at home, Roberts decided to trade the cold waters of Santa Cruz for the tropical waters and “pura vida” lifestyle in Costa Rica.

Once there, his “life blossomed like a flower.” He became a father, surfed every day, and continued his photography, working for Quiksilver, Latin America. When digital photography became the new standard, he left Costa Rica for Nicaragua, where he works to this day, shooting photos and guiding tourists. Thousands of miles away, Roberts’ presence can still be felt in Santa Cruz, forever locked into local history for bringing a radical crew of young surfers the attention they deserved with his groundbreaking imagery. 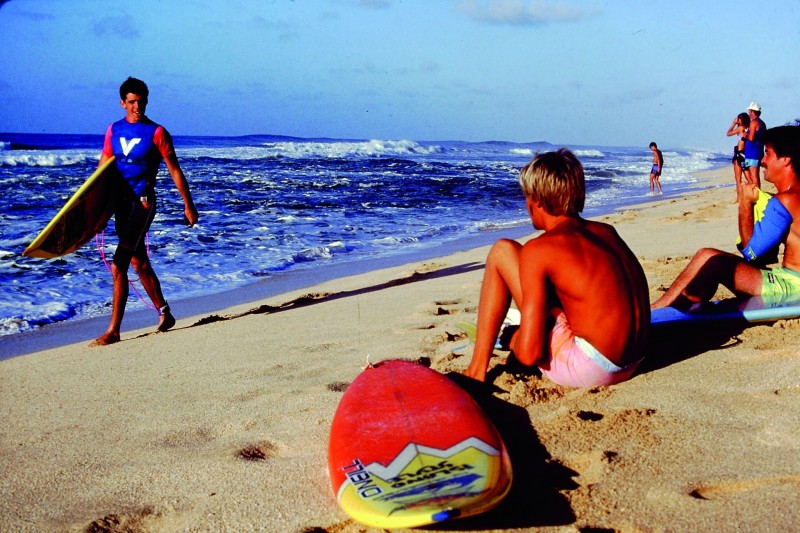 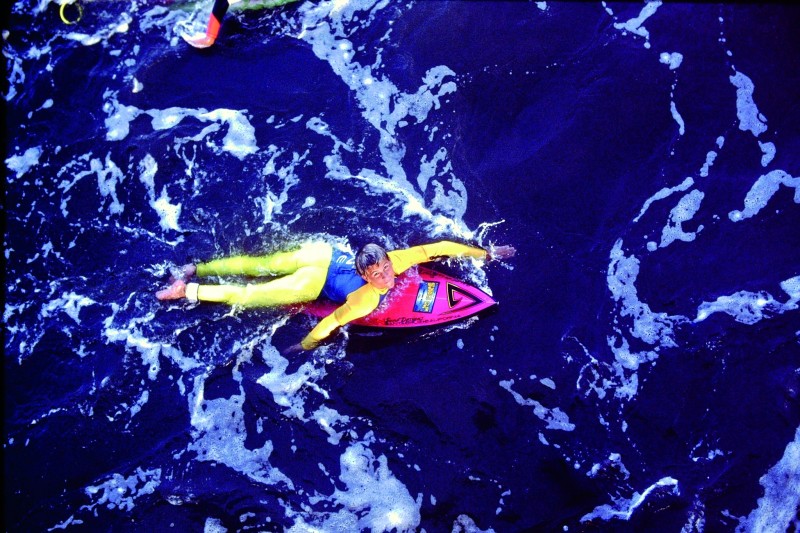