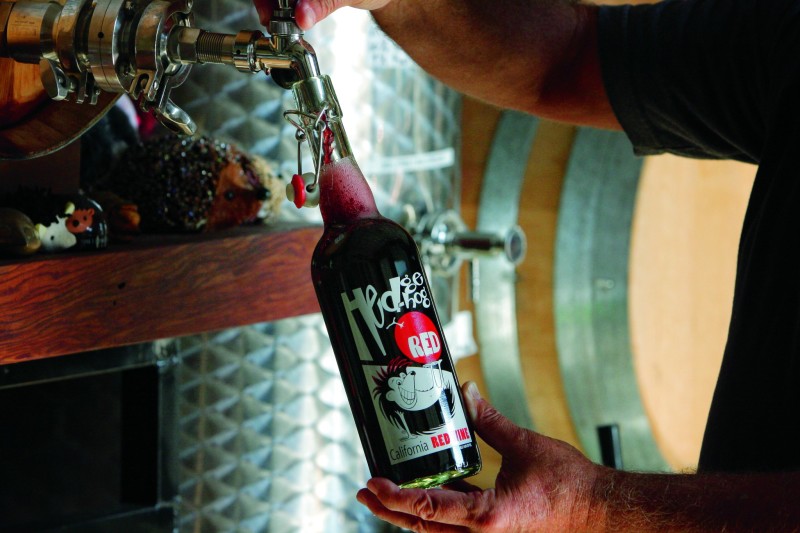 In the past, refilling and reusing glass bottles in the United States was the norm. In fact, a soda bottle in the 1950s had quite a lifespan, and would be washed and refilled an average of 50 times before being crushed, heated, and remade.

It was during that same period when single-use glass, plastic, and aluminum containers came into fashion, and the concept of refilling bottles again and again fell by the wayside. Recycling became commonplace two decades later, in the 1970s, to combat single-use, disposable containers filling landfills and littering street sides.

As a way to reduce the amount of beverage containers entering the waste stream, the EPA suggests people utilize refillable bottles. And with the rise of microbreweries and boutique wineries, the concept of reusing and refilling is regaining momentum in the states. In Europe, however, the practice never fell out of style. Michael Sones, owner of Sones Cellars on the Westside, has admired the use of refillables since he was a boy.

“Growing up in England, we used to have milk bottles delivered to our doorstep,” he says. “You put the empties out the next day, and they’d go back to be sterilized and used again, and used again.”

Inspired by the practicality of refilling containers, as well as its projected reduction on the cellars’ carbon footprint and packaging costs, Sones and his wife, Lois Sones, debuted their Hedgehog refillable bottle program in 2013, and it has been a staple for their business ever since.

“Some people have had their original bottles for five years, and refilled them some 50 or 60 times,” says Sones. “By and large, a wine bottle stays intact. It has life in it.”

Sones points out that the majority of a bottle’s carbon footprint comes from its manufacturing. A glass bottle is made from sand, limestone, and soda ash, which are melted down into molten glass, formed, inspected, and labeled in a factory before being shipped and filled to a beverage company, and shipped again. Recycled glass is crushed and melted in a similar process. A refillable bottle is simply cleaned, sterilized, and refilled.

Although Sones says he is the only wine bottler in the county offering a refillable bottle program, there are many more options for beer drinkers. Local breweries like Sante Adairius Rustic Ales, Santa Cruz Mountain Brewing, Discretion Brewing, Humble Sea Brewing Company, and Seabright Brewery are just a few of the many in Santa Cruz County that offer refillable growlers.

For those who can’t commit to refillables, or live too far from their favorite brewery, aluminum cans are the next best option. The biggest drawback to manufacturing aluminum cans is the mining of bauxite, which drives the energy consumption of a can’s initial formation to twice that of a glass bottle. But after the can is made, recycling an aluminum can is less energy intensive than recycling glass.

According to Sones, one of the biggest challenges of creating a large-scale refillable bottle program is uniformity. With that in mind, the State of Oregon has teamed up with one of its glass manufacturers and a number of breweries to create a universal refillable beer bottle that can be used 25 to 50 times or more before it needs to be recycled. The program was launched in July 2018, and if it’s successful, California might consider implementing a similar program.

“It’s all part of a bigger picture,” says Sones. “Instead of generating all of this glass, why not refill instead, and cut that carbon footprint back?”