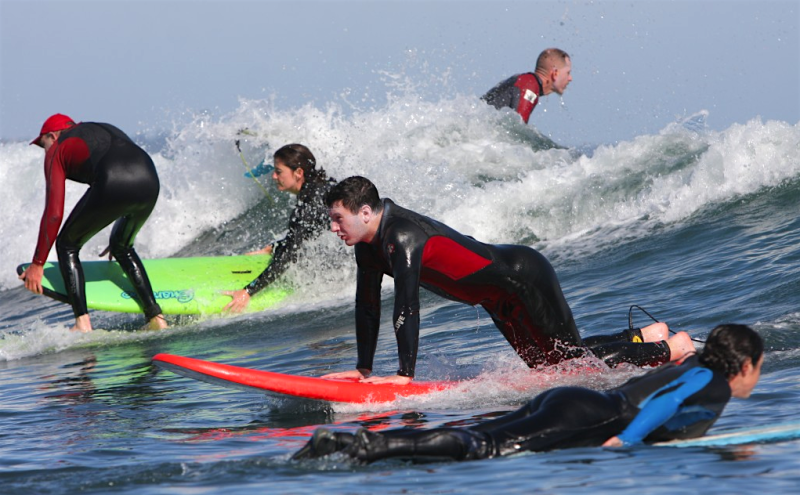 Growing up in Santa Cruz, I was taught to treat transplants with the same amount of respect as gum stuck to my shoe. I watched as their one-wheel electric skateboards, Costco soft-tops, and $7 lattes eroded my beloved surf culture like the winter swells that batter West Cliff Drive.

Rather than defend my local brethren who perch themselves on the railings of our crumbling cliffs, though, let me step down from my racehorse named Entitlement and, for the sake of argument, play the transplants’ advocate. After all, the question of “who deserves the set wave all depends on how you rank hierarchy.

Right now, status is determined by the amount of years a surfer has dedicated to a given break as well as the surfer’s skill level. What if, however, status was determined by the level of sacrifice a surfer had undergone to be at the wave? Remember that the transplant took the initiative to relocate his or her entire life in order to enjoy the same waves that I was born into. Using this logic, all I had to do was not die in order to ascend my way up the totem poll. The transplant, however, exercised true grit.

Although it would be funny to hear people plead their versions of “I walked 20 miles in the snow to get here” in order to gain status, systems that reward martyrdom don’t tend to bring out the best in us. That is why I propose a new system to structure hierarchy that is designed to bring forth our highest selves—let’s call it Localism 2.0.

Localism 2.0 is a model that would determine status in a lineup based on community engagement. That latte-drinking Netflix engineer could quickly rise through the ranks if they clocked enough hours at The Needle Exchange or volunteered at The Homeless Garden Project. Similarly, a local like moi could secure set waves as long as I volunteered with Ride A Wave or went grocery shopping for my 90-year-old neighbor, Gloria. If a dispute broke out in the water it would be solved with a swift tally of community-service hours. “Hey kook, you snaked me on that last wave!” one surfer would shout. “Screw you man, that wave was mine.” The other would shout back, “I spent nine hours cleaning up plastic bags along San Lorenzo River last week!”

Rather than passively grumble about our meth epidemic, Localism 2.0 would incentivize locals and transplants alike to get involved. Before long, San Fransisco and Los Angeles would take notice of our success and the model would spread across seas until even the most colossal issues of our time were being spearheaded by surfers and the Dali Lama himself would kiss my forehead and grant me his most holy medallion to honor my brilliant idea.

But, until that day comes, when you hear me hooting, stay off my wave, kook.