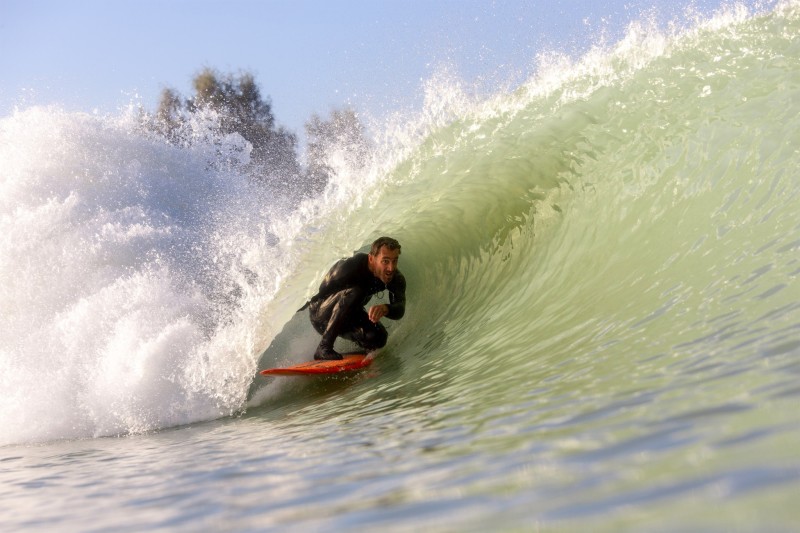 It’s 6:45 a.m. in Lemoore, Calif., and a deep orange glow is starting to silhouette the barns and cattle in the distance. I slowly pull myself up into a seated position and try to twist out the kinks left from a less-than-desirable night’s sleep in the back of my van. A late departure from Santa Cruz the night before gave me no other choice than the Tachi Hotel & Casino parking lot as my resting place.

Long drives and uncomfortable slumbers are pretty standard on the average surf adventure, but this trip is unlike anything I’ve ever experienced. For one thing, I am intentionally driving to the unofficial manure capital of California, not to the airport to hop on a plane destined for some tropical paradise. Secondly, the waves I seek are not majestic walls of water formed over a thousand miles of open ocean, but rather man-made and artificial.

After a quick drink of water and a jaw-cracking yawn, I hop into the driver’s seat to start up my white minivan, aka Princess Leia. I quickly type the address into my phone and am off to meet the crew from Save The Waves and Play Bigger at the Kelly Slater’s Surf Ranch. As a STW ambassador, I am lucky enough to be a part of the event, which melds environmentalism and technology, with keynote speakers like Cliff Kapono and Jeff Denholm, among other techies with a passion for surfing. During the five-minute drive, I can’t help but notice a large sign nailed to a fence post bearing the big, bold words “WAVE WORSHIP?” I guess the God-fearing folk of Lemoore aren’t impressed with the fact that a perfect 500-yard-long wave lay right around the corner.

And just like that I arrive. I buzz the intercom and the engraved pine gates slowly open to reveal an oasis inside. After a quick safety talk and introductions, the pool party commences. People of all ages and abilities take turns testing their equipment, as well as their coordination, on the flawless walls of water. There are some impressive rides and some equally entertaining wipeouts, but one constant remained: The comradery and stoke is maxed out at a 10 all day. I even witness a few tears of joy from Santa Cruz big-wave legend Sarah Gerhardt as she watches the replay of her 11-year-old daughter getting totally tubed and finishing the ride with arms stretched high in celebration.

When I get back on the highway to make the mind-numbing trek home, a realization hits me like a nose full of chlorinated water. Worship comes in all shapes and forms, however I don’t think I’ve ever been to a church or temple and seen as much pure joy as I did during my time at The Surf Ranch. So if I ever make it back that way again and see the owner of that sign sitting out on the porch for an afternoon smoke, I’ll stop and shout, “Damn right I’m a wave worshiper!”