Surfers belong to the ocean. Even after death, the waves call for them to return one final time. Answering this call, the surf community has cultivated a uniquely powerful and celebratory funeral tradition: the memorial paddle-out. 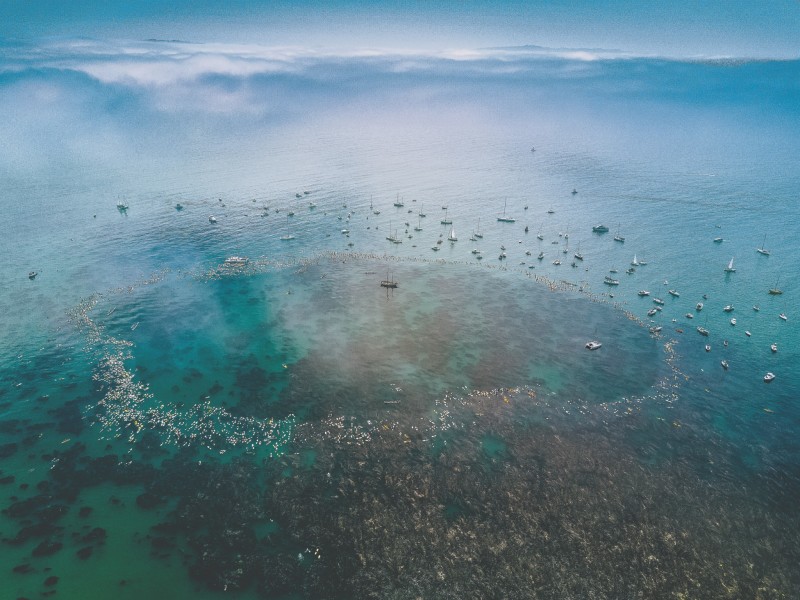 On an overcast Sunday morning in July 2017, a throng gathered on the cliffs of Pleasure Point, lined up seven to eight deep and spilling onto the single lane of East Cliff Drive. The crowd represented a cross-section of Santa Cruz—surfers, skaters, moms, dads, kids and grandparents. All eyes were trained on a scene unfolding 500 yards beyond the surf line, where thousands of surfers carrying white orchids formed a loose circle and sat on their boards, hands clasped. The air was charged with anticipation; the crowd quieted.

A Coast Guard helicopter came into view. It circled over the paddlers, the sound of its whirling blades breaking the silence just as the sun burned through the cloud cover. Suddenly, there was movement in the water. A chorus of cheers erupted, accompanied by a small army of hands splashing water toward the heavens. The ring broke up and closed in on itself, now a dense pack of bodies treading water while they took turns sharing hugs. Watching from the cliffs, the crowd broke into cheers.

This, the largest and most chronicled paddle-out in surf history, was a fitting send-off for local surf icon Jack O’Neill, who passed away June 2, 2017, at the age of 94. An estimated 3,000 surfers showed up to honor the man who pioneered the wetsuit and put our sleepy beach town on the map. 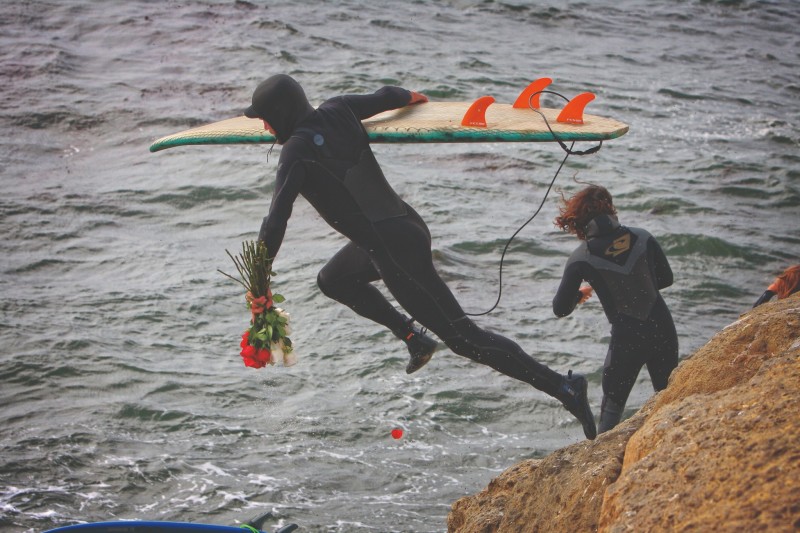 “It was amazing,” remembers Elfin Saffer, who has worked for O’Neill Surf Shop for 30 years.“I feel like that paddle out was done right. The family got it right. And it wasn’t about his dearest, closest friends. It was more about the world at large that he’d touched with his contributions to the sport, along with the local surf community he’d affected.”

Burial rites vary greatly around the globe. The memorial paddle-out is surf culture’s own unique spin, as the thought of cremation, followed by the dispersal of one’s remains into the sea, is one many surfers desire. As opposed to “resting in peace,” the ashes dissolve into the sea, becoming one with a body that never rests—a comforting thought for those who’ve spent a large part of their life in and around it.

Like a wave, no paddle-out is the same, however many follow a similar template. Usually, after the circle of surfers comes together, some words and stories are shared before a loved one or relative enters the middle of the ring and empties the cremated ashes. The fallen friend is sent off with a roar of jubilant screams and a frenzy of splashes. Teary-eyed mourners swim through the ashes and embrace.

Historians are unclear on the exact origins of this tradition. Though the ancient Hawaiian islanders surfed, they buried their dead on land. According to researcher Mardi Frost of Griffith University, the first recorded paddle-outs can, in fact, be traced to Hawaii, around the 1920s, but were likely organized by members of the island’s increasingly international “Beach Boy” community—young men hired by resorts to instruct the island’s early visitors how to surf, paddle, and understand Hawaiian culture at beaches such as Waikiki. It was from here, the mecca of the surf world, that this phenomenon spread globally. 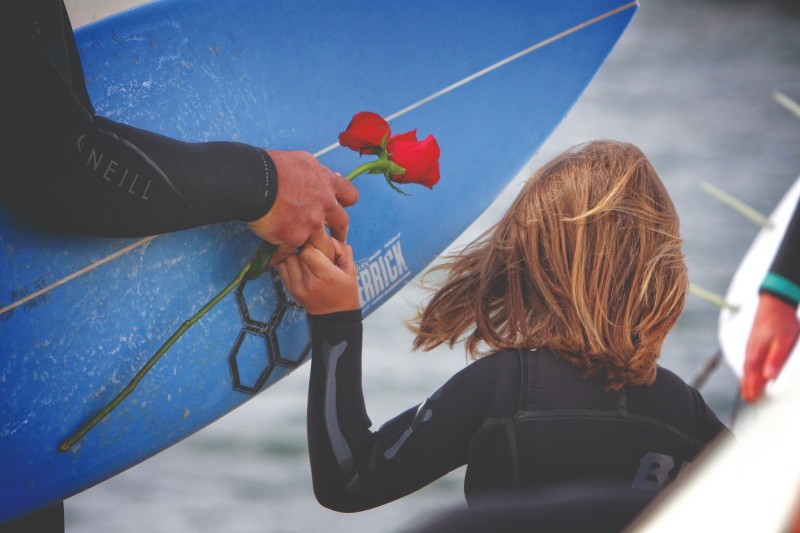 Most paddle-outs still draw from Hawaiian culture, with the inclusion of Polynesian customs such as the gifting of Ti leaf leis for attendees, which are said to call for protection and safe passage to the beyond.

Wherever they are taking place, the intention is always the same: to honor the love and intimacy the deceased had with their local waters and the people they shared it with. And, given our rich local surf history, it’s no wonder that the Santa Cruz surf community has long-since embraced the ritual.

Phil Waldemar, who moved to Santa Cruz from Kauai when he was 15, was gobsmacked to see his heroes so affected by the loss of his uncle, Westside mainstay and well-loved surfer Robert “Walt” Waldemar, at his paddle-out in 2013.

“I never realized how respected he was; the amount of people whose lives he’d touched,” admits Waldemar. “It was an eye-opener about how strong and tight-knit surfing communities are. I’ll never forget when Flea spread his ashes—my legends, guys like Pete Mel, had jumped off their boards to let his remains wash over them. That was powerful.”

This is the strength of surf communities around the world. Powerful bonds are formed in these tribes, which branch-out and intersect everywhere in the world that has surf. It’s a commune for adrenaline junkies of all kinds—where 10 year olds might casually banter with old-timers in between sets; where heckles and tall tales echo through the lineup; and where unspoken etiquette informs the power structure at play.

No matter the location, members of this global, oceanic tribe seem to share a passionate pride and respect for their elders, the local coastline and its health, and the power of the sea. Universally, there is comradery between the men and women who share this ethos. So it’s only fitting that they have their own sacrosanct, aquatic version of a funeral to usher departed kin into the afterlife.

When Santa Cruz lost its beloved 22-year-old big-wave sensation Jay Moriarity, the community turned out in a beautiful display of love and loss. Three rings were needed to include every last soul who gathered that day to honor the brave young man who embraced the warmth of aloha throughout his short life.

For his wife Kim, now Kim Wildey-Moriarity, the full force of this cathartic moment hit her as she spread her best friend’s ashes. 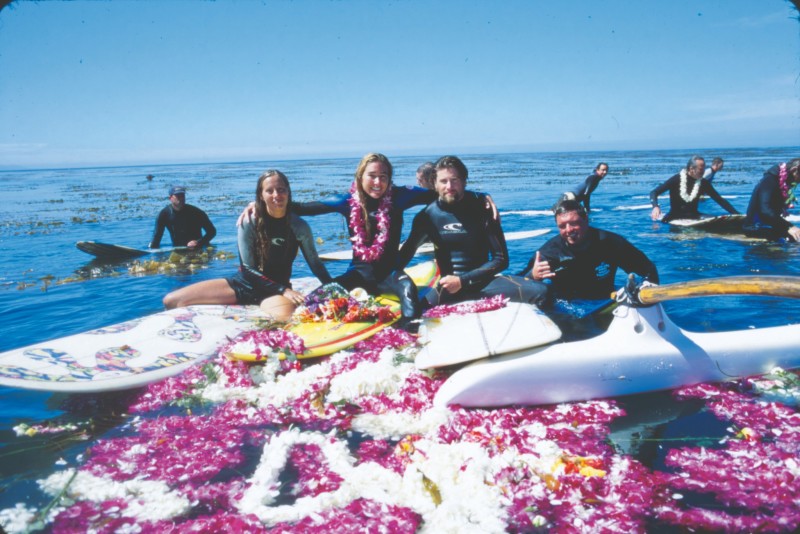 “At that moment I knew he was truly free. I could genuinely feel all the love and thoughts everyone had for him and our special surfing community. The ocean magnified all this energy in that moment,” she shares. “It was pretty surreal and heavy, but also amazing, healing, and heartfelt. We got to honor his life and the impact he had made on the rest of us and this was the natural way for us to say goodbye. I knew he was there with us in spirit.”

The occasion was immortalized in the 2012 film Chasing Mavericks, which celebrated Moriarity’s life through a Hollywood lens. Filmed in and around Santa Cruz, an integral scene involved recreating his paddle-out from 2001. The production released a casting call seeking extras for the dramatic rendition of this very tender, personal moment—one that some of those who knew Moriarity best didn’t care to relive.

One such local, Darshan Gooch, was mentored closely by Moriarity, and although he was happy that his friend’s inspirational tale was being shared with the masses, he couldn’t bring himself to join in. 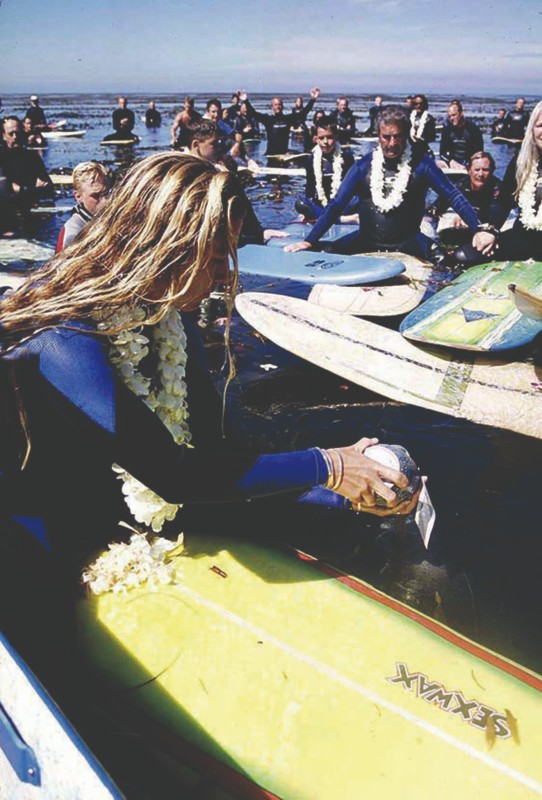 “For me, it was too close to the heart. It felt too sacred and intimate of a place in my journey to tamper with or recreate in any externalized form,” recalls the perpetually stoked surf rep, husband, and father of two.

There are often reports of supernatural sightings during paddle-outs, reflecting a belief that the deceased has somehow shown their presence. This might be a pod of dolphins passing under the circle, or a calm ocean abruptly coming to life, as was the case with the massive “Brock Swell” that surprised those gathered to honor big-wave legend Brock Little, who had died from cancer one week earlier, on Oahu’s North Shore in February 2016.

Brian Kilpatrick, the vice president of marketing communications for O’Neill International who was tasked with organizing Jack O’Neill’s memorial, swears he saw a sign from the late legend as the ’65 Team O’Neill Catamaran rounded the corner of Pleasure Point.

“All morning we were completely socked in by fog,” Kilpatrick recalls. They’d hoped for sunny, blue-bird conditions, but the O’Neill crew were fired up regardless as they left the Harbor. Then, Kilpatrick felt a mystical presence as they neared circle of surfers. “Right when we reached the Point, the fog, which seemed impenetrable, began to burn off instantly,” he recalls. “It truly felt like a sign of his spirit moving on.”

Waldemar had a similar experience as his uncle’s memorial. “When we showed up, it was flat,” he says, “but after 30 minutes, waves started coming in and everyone got to surf together in my uncle’s honor. It was crazy.”

Connecting the fallen wave wrangler with their tribe doesn’t need an organized ritual such as a paddle-out to be powerful. In some cases, there are other meaningful, appropriate, and personal ways to go about it.

Take Adam Replogle’s ongoing commemoration of his longtime friend, the visionary artist and pro surfer Shawn “Barney” Barron, who died from heart complications on May 5, 2015.

A spirited paddle-out took place in Barron’s honor on May 23 at Mitchell’s Cove. But before that, Replogle found a way to carry Barron with him wherever he goes—literally. Soon after his passing, Replogle bumped into Barron’s best friend, Darryl Virostko, at Stockton Avenue. Virostko had just come from picking up Barron’s ashes, and asked Replogle if wanted to take some of their late friend’s remains. Replogle said yes, found a small container, and drove away with a bit of Barron in his pocket.

To this day, Replogle tries to carry them around wherever and whenever he goes so he can offer some to Barron’s many friends around the world.

“They’ve gone to Spain, France, and Portugal, where Nat Young and I planted some into the soil with some succulents,” Replogle says. “Gifted some to [Australian surfer/artist] Ozzie Wright. He was going to mix the ashes with some paint and do some art with them. I like to spread his ashes everywhere, really.”

Barron didn’t get a chance to surf Kelly Slater’s machine-powered wave pool— an experience Replogle knew his compadre would have loved. So when Replogle was invited to Slater’s Surf Ranch in Leemore, Calif., he knew exactly what to do.

“Before my surf I put some of his ashes in the pocket of my Billabong boardshorts, and during a ride [I] spread some of them out while I surfed,” he shares. “Now he’s out there every day.”

Whether it’s in the salty sea or recycled pond-water, offering the remains of their friends to their chosen element during a memorial paddle-out persists as one of the world’s most touching farewells.