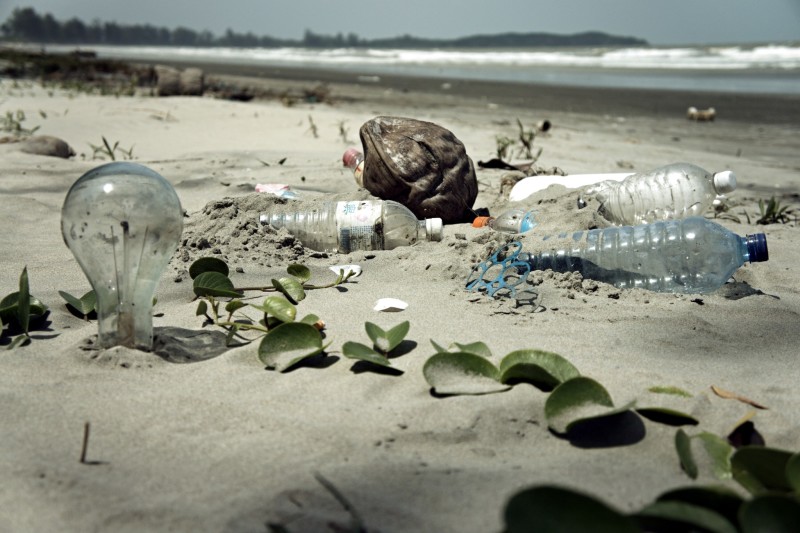 Hotels are all about creating convenience for guests, but some of the convenience comes at a cost for the environment: The tiny plastic bottles of suds and creams provided in each room are usually only half-used. Hotels, which aren’t equipped to recycle these miniature toiletries, most often toss them out with the regular trash. Worldwide, experts estimate hotels throw away about half a million of these plastic bottles every day— significantly adding to the world’s plastic waste problem.

But some hotels are waking up to this issue, and have started to either donate half-used toiletries to the homeless or replace small toiletry bottles with larger ones or wall-mounted dispensers. And a set of brand-new rules born in Santa Cruz is helping push change even farther forward: In December, Santa Cruz County’s Board of Supervisors unanimously passed an ordinance–the first of its kind worldwide–requiring nearly all hotels and rental properties to stop offering guests toiletries packed in single-use plastic containers.

The ordinance was imagined and advocated for by local ocean conservation organization Save Our Shores (SOS) in a bid to reduce plastic waste, much of which ultimately ends up in the marine environment where it poses a hazard to wildlife and humans. While SOS considers this new rule a win for the environment, its leaders say their work on preventing further plastic pollution in the oceans won’t stop there.

Now, SOS is ambitiously working to bar other pollutants through local legislation. Its latest legislative targets include rules that would prevent the sale of balloons, establish take-back programs for used contact lenses, require Laundromats to install filters on their machines to catch tiny plastic clothing fibers, and ban the sale of single-use plastic coffee pods and single-use plastic water bottles.

“All of the items we are targeting have the potential to end up on our shores and in our Monterey Bay,” says Katherine O’Dea, SOS’s executive director. Globally, she adds, “plastic ocean pollution has reached crisis stage with more than eight million metric tons of plastic entering our oceans every year.”

Despite attempts by municipalities, countries and companies to improve plastic waste collection and recycling, experts say that plastic will continue to be a problem so long as it is still used. This is because much of it winds up in landfills and oceans regardless of recycling efforts: In a 2017 study on the fate of all plastics ever made, scientists discovered just 9 percent of plastic created has been recycled, and 79 percent has ended up in landfills and the natural environment. Twelve percent of plastic waste has been incinerated.

Better, then, are solutions focused on preventing waste in the first place, experts say. To that end, legislation curbing use of disposable plastic items is gaining traction worldwide, and Santa Cruz is a leader, says the county’s Zero waste programs Manager Tim Goncharoff.

“We were among the first to ban plastic bags, polystyrene, plastic straws and more,” says Goncharoff. “We have documented more than 100 cases where other cities, counties and even states have adopted ordinances borrowed from Santa Cruz City and County, from San Diego to San Francisco, Denver, Seattle to New York City….  Showing what is possible magnifies our impact far beyond our size and numbers.”

Goncharoff says that both Santa Cruz County’s residents and business owners have generally reacted positively to such legislation. When there are complaints, he says the county works with all parties to craft a plan that’s both enforceable and effective.

Elsewhere, plastic-use restrictions have been met less favorably. Hawaii is one example: Every time legislators have proposed to ban expanded polystyrene (EPS) foam food containers over the past decade, the plastic and restaurant industries have successfully argued that a ban would kill their livelihoods. To date, the state has been unsuccessful on prohibiting EPS foam food containers, though, like California, it has previously banned plastic bags.

SOS’s legislative tactics have involved creating and signing petitions, which are delivered to the county and city with the help of other conservation organizations such as Surfrider Foundation, Oceana and Sierra Club. Members of these groups also speak out in support at public meetings and educate the public at events and on social media, in addition to asking for industry and business support—which is critical in getting new legislation passed.

While its recent success with plastic toiletry containers suggest their current strategy on single-use plastic legislation is working, O’Dea says SOS remains on its toes in order to address the next round of single-use plastic items. “Our tactics may evolve as we get deeper into the heart of these issues, depending the response or push back we receive,” says O’Dea. “We have a lot more work to do and we are digging in for the long term.”

A 2017 study found that just 9 percent of plastic ever made has been recycled, while 79 percent ended up in landfills and the natural environment and 12 percent was incinerated.