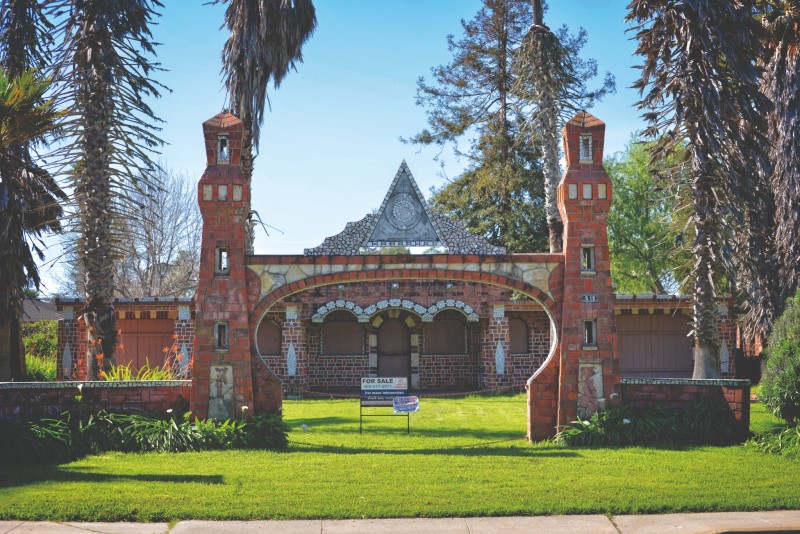 It’s known by a variety of colorful nicknames—the Red Castle, the Abalone Palace, the Watts tower of Santa Cruz, the Yogi Temple, and, its most recent moniker, the Court of Mysteries. Whatever you may call it, the enigmatic compound on the Westside of Santa Cruz has been a source of gossip and tall tales for decades.

“I’ve discovered over years of doing research that when there are persisting rumors that fill a gap in history, it is largely a community’s effort to understand something that’s a puzzle,” says local historian Carolyn Swift. “There’s always some truth in there, but it’s hard to pull the fact away from the fiction.”

Located at 519 Fair Ave., the curious home is composed of brick and abalone shells and embossed with seemingly meaningful shapes and designs. Kenneth Claire Kitchen built this home in the 1940s while, just down the street at 1211 Fair Ave., his brother Raymond Kitchen worked on his own unique edifice, which would later earn the title Kitchen’s Castle. Some say the brothers worked on their constructions night after night, under the cover of darkness. Although this story and many others surrounding the bizarre-looking estates at are probably spurious, it hasn’t prevented locals from speculating on the brothers’ motivations. 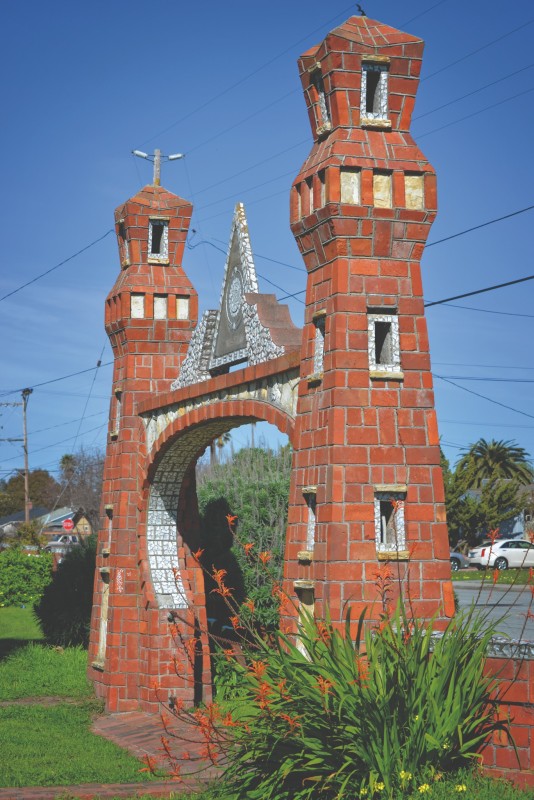 One rumor claims that they worked in the moonlight to energize their creations with supernatural energy, while another is that the Kitchen brothers stacked bricks in the wee hours to avoid the prying eyes of building inspectors. But both stories are unlikely to be true. Kenneth and Raymond Kitchen were both adept and experienced builders, and had applied for building permits. Kenneth applied in 1946 for Unit #1 of the Yogi Temple, as he called it, and his brother applied for his own building permit for his property in 1947.

The more likely reason that the Pennsylvania-born brothers worked on their passion projects at night is that they didn’t have any other spare time. The two worked as builders all around Santa Cruz, and would have been busy during the day.

“The brothers had building skills and were stonemasons,” says Swift. “Even if they landed only occasional odd jobs at the start, Ken and Ray were able to recognize and salvage leftover materials and use them creatively, using natural materials, like abalone shells, to enhance the rough construction of their inexpensive housing.”

Kenneth and Raymond had followed others from their large family to Santa Cruz from Pennsylvania in the midst of the Great Depression. Here, they eventually purchased plots of land on Fair Avenue in the late 1930s. Kenneth first built modest housing, and began constructing a fence around the property, which included one of the compound’s most visible and well-known structures, the so-called “Gate of Prophecy,” which still stands today. According to the account of an unnamed source, Kenneth believed that the symbols of the sun and moon on the gate’s triangular plaque could move, and would one day line up and serve as a harbinger for the end times.

However, according to the Yogi Temple’s second owners and reports from neighbors, Raymond said that the esoteric symbols and ornate designs that covered their constructions were modeled after a postcard he received from India, and didn’t have any particular religious or prophetic significance.

A few years after the brothers applied for their building permits, they left their unfinished creations in the hands of others. Raymond moved to the Central Valley in 1949, where he died in 1973. Kenneth left in the early 1950s before he had completed the second story of his unorthodox home, which only added to the speculation around the site and its builder.

The property is again under construction. The latest owners, Douglas Harr, a tech consultant, and Artina Morton, an artist, purchased the 519 Fair Ave. property in 2016. The couple plans to preserve the parts of the original building that have survived, and add structures of their own to live in, which may further obscure the real story of the Kitchen brothers and their temple, and fuel local legends for decades to come.

“Personally, I think any change to the landscape is going to detract the ability of the old structures to tell their story,” says Swift. “And the destruction that’s already taken place has erased some of the context. My realistic hope is that enough is preserved to allow the story to go on—to retain the wonder of unanswered questions as well as the sense of mystery.”

One comment on “Remember When… The Kitchen brothers built the Westside’s weirdest homes and spawned decades of rumors?”