The view over Cowell’s Cove from West Cliff Drive is an iconic one. It’s a scene that includes the bustling Municipal Wharf, the Santa Cruz Beach Boardwalk, the mountains beyond, and arguably one of the most popular surf breaks in the state—Cowell’s itself. All that makes it a very popular place to park, largely for coastal access—waves, ocean views, beaches—but also just for hanging out. This leaves room for all kinds of activity, mostly benign, but also occasionally problematic.

One of those problematic incidences at the Cowell’s parking lot, right by the stairs down to the beach, in June of last year, led to a neighborhood group forming to take a closer look at the nature of parking time in the lot. To do that, group member Al Ramadan—a tech executive who lives near the lot in question—developed a plan to collect a year’s worth of data using a Verizon parking sensor device called the NetSense Solution.

“We decided to find a way to collect data and establish a baseline for a fact-based conversation,” Ramadan says.

The incident in June of 2018 revolved around a man who, according to Ramadan, was terrorizing people in the parking lot in a “lecherous” manner for several days, resulting in an arrest, but a subsequent release. It culminated with the same man approaching two children walking by the parking lot, at which point Ramadan and another neighbor intervened. The man was arrested again and hit with a charge of felony manslaughter for a separate incident, to which he pled guilty.

“There were other events including gang violence and drug dealing,” Ramadan says. “The neighborhood collectively felt under siege …”

The community group, which is comprised of about 30 families and is called “The West Cliff / Manor Neighborhood Group,” raised funds for the sensor and had it mounted on a nearby street light. From July 6 to Sept. 14, 2018, the sensor, which uses stereoscopic cameras, tracked parking events, as well as pedestrian, bike and auto traffic—all based on movement—transferred the data to a Verizon data center specializing in parking and traffic analytics. The data generated informs the neighborhood group’s summer data report, covering things like dwell time, whether it’s day or night, turnover rate, and more. The report is being shared with the City of Santa Cruz.

Calculations include: 13,277 parking events with an average of 48.7 minutes. 91 percent percent of those parking events were for two hours at a time, with a max parking time recorded a 813 minutes, or 13.5 hours.

According to the report, 50 percent of the people parking had a dwell time of less than 25 minutes, while less than 5 percent account for extended park times—a category identified as “blockers,” who limit access for normal users. 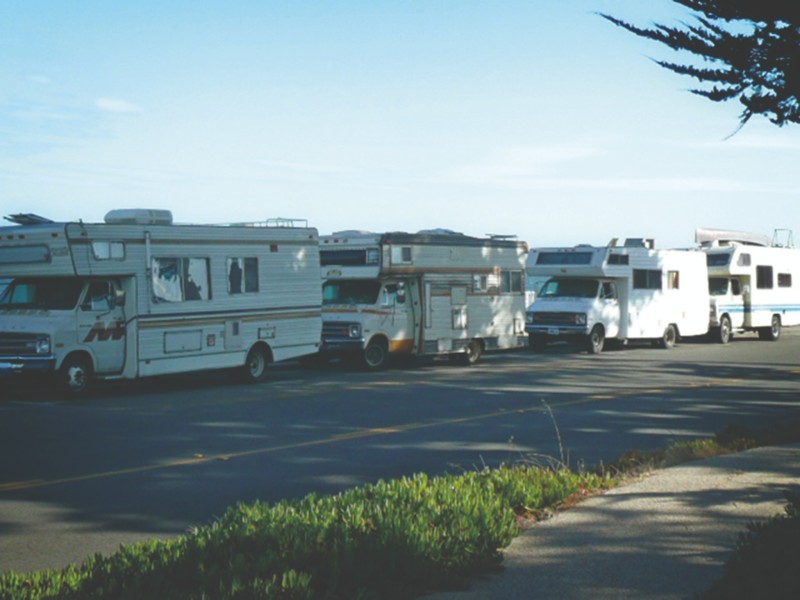 Leveraging records on Santa Cruz Police Department responses to the parking lot, the neighborhood group report showcases that calls for service spike about 10 times after 9 pm.

Ramadan says that the group’s main vision is to introduce a curfew to the parking lot, 10 p.m. to 5 a.m., limit the parking stay to three hours, and potentially charge on an hourly basis with the kiosk. Proceeds could be directed to SCPD for additional support, as well as to repairs and upgrades along West Cliff Drive. The proposal is to conduct a two-year trial under these changes beginning this spring.

Parking access along the coast falls under the purview of the California Coastal Commission (CCC), which can sometimes yield a tug-of-war between cities and the state agency. The City of Santa Cruz can issue parking alterations, permitting and hourly restrictions, but if the parking is within 300 feet of a coastal bluff, called the “Appealable Coastal Zone,” it can be overturned, says Michael Ferry, who works in Planning and Community Development with the city.

A similar case occurred on Pelton Avenue many years ago near the Surfer Statue on West Cliff Drive. There was problematic behavior at night and the neighborhood wanted to restrict parking from, he believes, 10 pm to 5 am. After compiling a stack of police incident reports, the city, fueled by the Lighthouse Field neighborhood, made their case for restricted parking, which at the time was unlimited.

“We came up with the justification for limiting the hours,” he says.

“But then we scaled the 10 p.m. start back to midnight…Because,” he paraphrased what he had been told at the time by CCC, “Some people like to surf at midnight, under a full moon, sometimes at midnight, and that parking [limitation] would prohibit coastal access.”

“So it was kind of a win for us, but also an educational thing,” Ferry continues. “Coastal access to [the CCC] is a statewide issue, not a city one. Access to the coast is for everyone, so we have to balance that.”

Ferry says that paid parking is not a likely development for the lot.

Chief of Police Andy Mills has been tuned into The West Cliff / Manor Neighborhood Group’s initiative since its inception.

“I do appreciate that they’ve approached this from a perspective of gathering information, and data, to determine what the real issues are,” he says, “rather than overreacting or painting with a broad brush.”

“If people are there for an extended period of time—drinking or smoking dope—that gives more opportunity to start acting out,” he says. “So the question becomes, ‘Can you reduce the opportunity for criminal activity by restricting the amount of time people are allowed to stay there?’”

“Everybody wants access to the beach,” Chief Mills continues, “and having a reasonable amount of time for people to be there seems appropriate to me.”

He adds that this part of West Cliff Drive is an extraordinarily safe part of the city, but that occasional “spats” happen.

“You get a person with a mental health problem that’s exacerbated by methamphetamine and begins to act out, and do things that are not only bizarre but criminal,” he says, referring to the incident that Ramadan responded to last year. “We’ll leverage anything we can to regulate that behavior.”

Ramadan, who enjoys Cowell’s and West Cliff Drive on a daily basis, says the goal is to protect the space.

“Cowell’s is our community center,” he says. “On any given Sunday, half the Westside is on the beach and in the water. … Bad shit started happening in the Cowell’s Overview Parking Lot … and we formed a neighborhood group to protect it.”

The West Cliff / Manor Neighborhood Group is formulating a “winter data” analysis and plans to share new results this summer.