Special to the Sentinel

Raised on a chicken farm in Soquel during the lean years of the Great Depression, Thorne’s life in Santa Cruz County would embrace everything from agriculture, to education, to his great love of the sea, particularly surfing and sailing.

He was, by all accounts, a man of constant activity and positive energy.

“He was a real gentleman,” recalled his life life-long friend Bob Rittenhouse Sr., with whom he first surfed on the Santa Cruz waterfront 75 years ago. “If you needed to get something done, you could count on Doug for leadership. He was widely respected by people of all ages. He was dependable, dependable, dependable.”

Douglass Thorne, who died at his home in the Soquel hills at the age of 90, made a huge impact on the greater Santa Cruz community. He served as an administrator at all three of the Santa Cruz City School District’s high schools – Santa Cruz, Harbor and Soquel. He also served for 40years in the U.S. Naval Reserve and was a founding member of the Santa Cruz Surfing Club Preservation Society (SCSCPS), in which he was active until the time of his death.

Born in 1928 in Hanford, California, Thorne and his family moved to Santa Cruz County when he was 4 years old. Attending Soquel Elementary School and Mission Hill Junior High, he later graduated from Santa Cruz High in 1946. He completed his collegiate degree at Cal Poly San Luis Obispo, where he majored in Agriculture Science.

Thorne’s love of the ocean led him to become, at the age of 12, one of the early surfers on the Santa Cruz waterfront and a member of the fabled Santa Cruz Surfing Club, centered at Cowell Beach. He also served as a beach lifeguard.

Thorne joined the local Naval Reserve unit in 1948 and later attended Naval Officer Candidate School in Newport, Rhode Island. He served on the USS Rendova during the Korean War and participated in “Operation Ivy,” a secret thermonuclear weapons test at Eniwetok Atoll in the Marshall Islands.

Following his return to California, Thorne met the love of his life (and eventual wife of 65 years), Cherie, at Huntington Beach, and they were married seven months later. The couple would later raise five children in the community— Scott, Hugh, Laurie, Eric, and Krista.

“We were all remarking on how lucky we were to have parents like ours,” said his son Hugh Thorne. “It’s remarkable how much our dad and mom accomplished in their lives together.”

“Dad’s spirit was larger than life,” added his youngest daughter Krista Thorne-Yocam. “He took a genuine interest in anyone he met. He was a beacon of love, honesty, integrity, hard work, compassion, service, and a ‘Never Give Up’ attitude.”

Thorne’s first local job in education was as a dean and athletic director at Santa Cruz High School. Many alumni still recall him paddling out to local surf breaks to haul in truant students. He also developed one of the first high school surf programs in the state.

“Doug was a great guy, an avid surfer and special friend,” said Bob Pearson of Pearson Arrow Surfboards, current president of the SCSCPS, and the person Thorne first hired to coach the surf program at Santa Cruz High. “Doug made our lives better and he will be truly missed.”

In 2011, Thorne was selected as Old-Timer of the Year by the Santa Cruz Old Timers Association.

“I feel fortunate to have surfed and sailed with him over the years and to have shared a special friendship,” said the organization’s president, Kim Stoner. “He was a great guy and a great waterman. He always had kind words for everyone.” 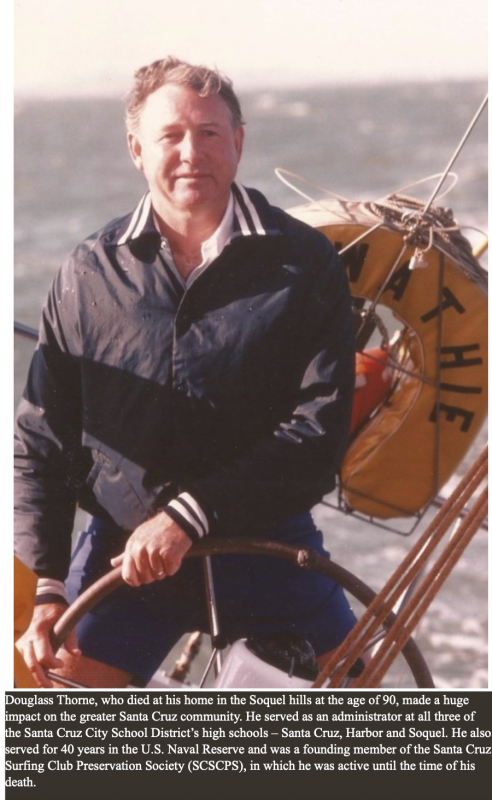 Music has always been the language of guitarist Bireli Lagrene. Following in the footsteps of legendary gypsy jazz guitarist Django Reinhardt, Lagrene hails from Alsace and plays with incredible precision, [...]

Music has always been the language of guitarist Bireli Lagrene. Following in the footsteps of legendary gypsy jazz guitarist Django Reinhardt, Lagrene hails from Alsace and plays with incredible precision, strength and virtuosity – he is considered to be one of the world’s premiere practitioners of gypsy jazz. Lagrene’s acclaimed Gipsy Project ensemble features a trio format on this concert date, with saxophonist Franck Wolf and bassist William Branard.