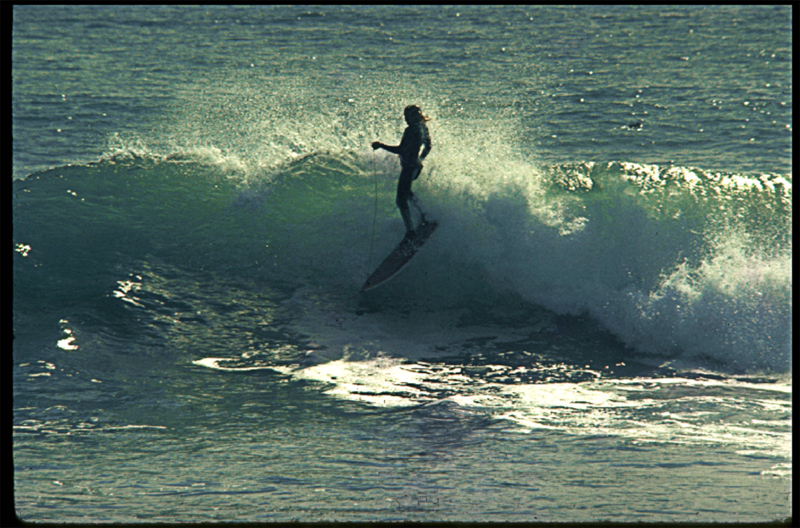 Pat O’Neill tests out one of his early leash prototypes, which was attached to the nose of the surfboard, at Steamer Lane circs 1966. Photo courtesy of O’Neill

The first south swell of the year lights up Steamer Lane with clean, green overhead surf beneath a baby-blue sky. An epic sandbar stretches out down to Indicators, where a flock of hyper groms snatch up leftovers, chirping like swallows. A freak set wave washes through the lineup, forcing a first-time surfer to ditch his longboard perilously close to the preteen pack. Observers from the cliff gasp with horror, anticipating a nasty headwound or worse. Somehow, all parties pop through the soup unharmed. Thanks to the leash strapped to inept surfer’s ankle, his heavy board stretches just short of his head, preventing injury—and possibly death.

These days, lifesaving surfboard leashes are standard surf accessories across the globe, yet it hasn’t always been that way. Santa Cruz surfers played a prominent role in the research and development of the blood- and board-saving invention, and were also at the center of the controversy surrounding their introduction in the ’70s.

Master shaper Bob Pearson started surfing in 1964, and recalls the dangerous era of surfing without leashes, and the equally risky period of cord experimentation that followed. 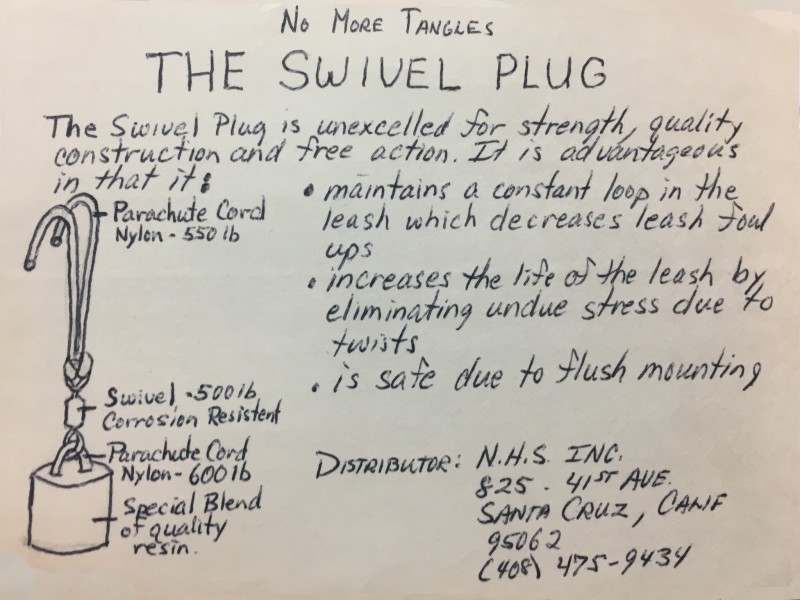 He remembers surfing 10-foot swells with 15-to-20-foot faces at the Lane alongside 30 other adrenaline junkies before leashes came around. During these dodgy days, massive cleanup sets would roll through Middle Peak, ripping surfers from their boards like a tsunami uprooting palm trees.

If you found yourself caught on the inside paddling back out, you’d better be ready not only for a set of bombs on the head, but bombs equipped with half the lineup’s 40-pound fibreglass missiles. “Now you realized that if one hit you, your head would cave in, so you let go of your own board and dove down,” remembers Pearson. “Now all the sudden you and 16 guys are swimming into the rocks to peel [your] boards off the rock.”

Surfers were using all types of crude methods and materials to anchor themselves to their boards, from Marine-surplus bungee to elastic. None of these were safe or sustainable. While Pat O’Neill, son of Jack, is generally credited with the development of the first functional surf leash, Pearson was along for the first dicey test runs.

During an 8-10-foot day at Steamer Lane in 1974, O’Neill and Pearson used suction cups on the nose of their shortboards, with a length of surgical tubing attached to their wrists.

“I was really nervous about losing my board,” Pearson admits. “After 10 to 15 waves, the suction cup would come off but it would hold it long enough so you were able to get to your board. I remember seeing [O’Neill] doing a few turns, pulling with his hand to pull the nose, pulling the nose around to do turns.”

That stretchy tubing was an issue. After a spill, the tubing would stretch in the spin cycle, building up tension like a bowstring and shooting back toward the surfer as weaponized fiberglass. One of O’Neill’s primitive prototypes was responsible for his father’s famous loss of an eye during a surfing accident.

To go around the suction-cup issue, Pearson designed a “leash cup” composed of PVC pipe, resin, and a parachute cord loop. He began setting them on his own boards, along with those belonging to his friends and customers. He traveled up and down the coast with his tail-fitted “leash-cups,” imploring shops and board builders to embrace the exciting accessory, yet most found the concept hard to grasp.

“A lot of shops were like, ‘Leashes? You’re doing leashes?! Why are you doing leashes? They’re dangerous!’” says Pearson. “We found that not to be the case, that we could get away with it.”

In the ’70s, the shortboard revolution caught fire and a young man named Dennis Godfrey was testing his surfing skills around Pleasure Point. Although companies like Block Enterprises were soon advertising their own leashes in magazines like Surfer, to Godfrey and others leashes were “kook cords” or “sissy strings.” This is a time in which simply paddling out while wearing a leash was grounds for dismissal from the lineup. If you wanted to earn your place, you’d have to pay for it.

“It became a platform to stand on: ‘Cord vs. No Cord,’” Godfrey reminisces. 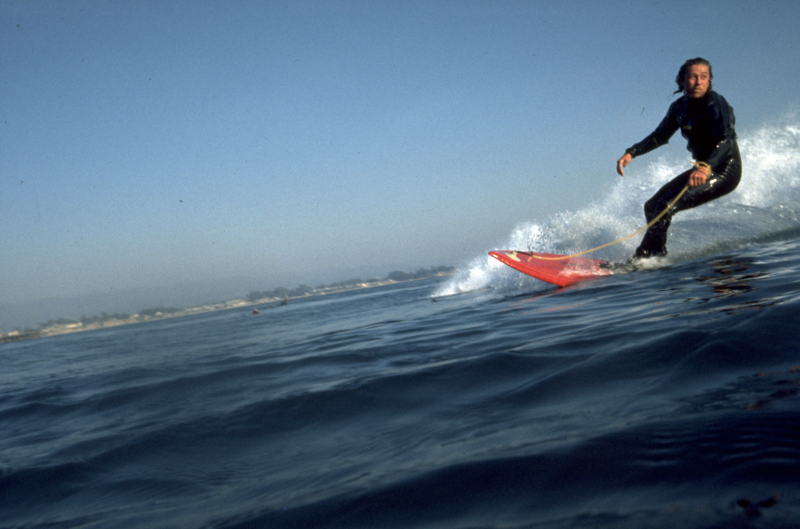 In fact, the old guard rails lining the cliffs at the Point had stenciled graffiti reading “No Cords” up until the 2007 seawall face-lift. The anti-cord backlash, Godfrey explains, was a natural reaction from passionate surfers who were worried about something new changing the “purity” of their sport. As a staunch opponent to cords at the time, Godfrey believed leashes spoke to a surfer’s skill—or lack thereof.

“There was no need to search for a pecking order; it established itself based on one’s skill in the surf,” Godfrey states. “Without a leash, you really had to think things through. I just thought that the no-cord thing was such … an easy regulator in the water.”

Surfing without a leash is costly. It costs you waves as you swim to shore. It puts others at risk, including yourself and surfboard. So, despite early resistance, by the ’80s, most surfers couldn’t imagine paddling out without them. Further tweaking traded surgical tubing for urethane cords, creating a stronger composition used dependably in waves of consequence.

The fact is that the invention of the leash, no matter how you view it, made surfing safer for surfers and their boards.

“There was a whole negative thing about leashes coming on—how they allowed more people in the lineup, which is a bad thing if you are thinking [about] it from a selfish standpoint,” says Pearson. “Looking at [it in terms of] who’s having more fun, more people can enjoy surfing because of the leash. I tend to think that majority rules—that it’s a good thing.”

Even Godfrey has come around. “It was a nice battle at the time, but to tell the truth, once you put that leash on, it sure felt good,” he admits with a sly smile.