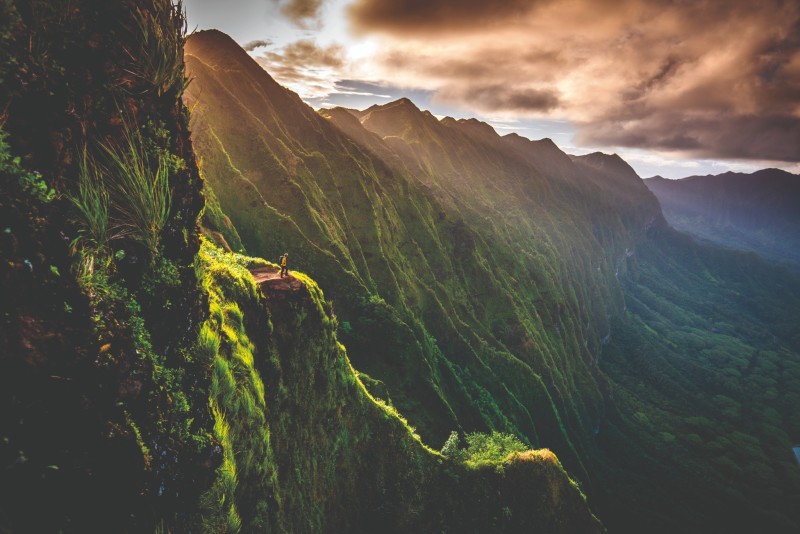 Evan Austen | Koolau Mountains. This mountain range defined an era of my life and continues to. This was taken on a small traverse I was enjoying with some friends. It happened to grace the pages of National Geographic Travel Magazine, as well as be recognized as one of their best images of 2017.

I first met Ryan Moss about 10 years ago when he reached out to Shane Desmond (my tow-surfing partner at the time) and me asking if he could tag along and shoot photos on one of our winter wave-hunting missions. His youthful enthusiasm sold us on the spot.  He assured us that he had a water housing for his camera and didn’t mind bobbing around in 50-degree, shark-infested waters. This was our type of kid!

Fast forward a couple weeks and with a solid 8-10-foot swell marching down the coastline, we were set for an early morning strike mission. Coordinates were confirmed, and a meeting time and plan of attack were sorted. Coffee in hand, full tank of gas in the ski, 5mm wetsuits, 12-lb tow-board, towline, rescue sled, gloves, two-way radio—check, check, check.

With a few stubborn stars dotting the sky above and the glow of tangerine tickling the horizon, Shane squeezed the throttle of our Honda Aquatrax Jetski and we set off up the rugged Northern California coastline. Our plan was to pluck Ryan off a secluded beach and take him into the line-up, where he’d try and capture us whizzing by in the golden early morning light. 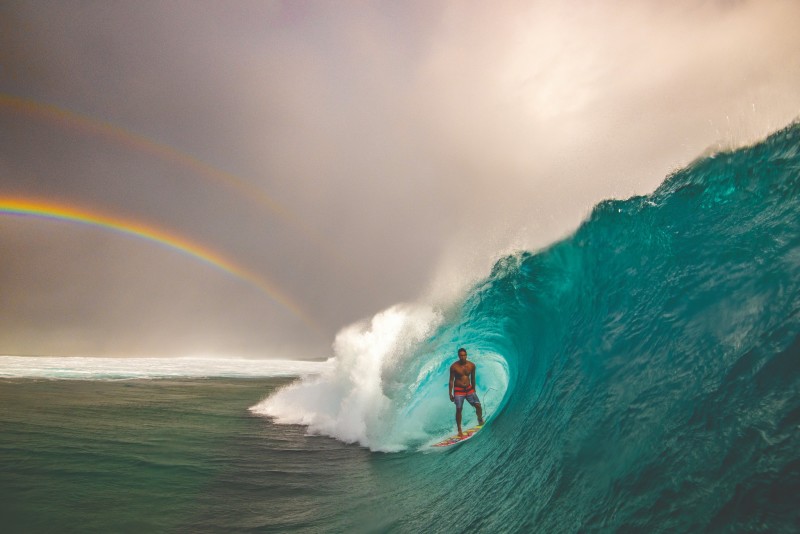 Angelo | Teahupoo Many people don’t know that Angelo is the man out at Teahupoo. He is a local legend. He started off bodyboarding and still does on the days that are considered borderline TOW. This image was inspired by him and Zak Noyle, who got an incredible image in similar conditions. Tahiti is the happiest place on Earth, and who can argue with images like this?

“Wonder if he’s going to be there?” I shouted over the engine noise to Shane. “We’ll see!” Shane blurted back to me.

You see, young surfers don’t have the best reputation for punctuality and this early morning excursion had a time stamp of 5:30 a.m. To our amazement, the kid was there, standing stoically in the cold darkness, camera in hand. We quickly snatched him off the shore and proceeded back out into the pounding waves. Stiff offshore winds set spray curling off the back of swells blinding us momentarily. It was pumping and we were chomping at the bit to lock into our first rides of the morning.  “You good?” We shouted back to Ryan. “Yeah, all good!” And just like that, the boy slid off the sled and into the icy water.

Shane and I quickly unstowed the tow line and began flinging each other down perfectly groomed walls at 40mph, zooming by seal boy with carely precision. As soon as our playtime began it quickly came to a halt as we noticed Ryan frantically waving his arm in need of assistance. We were on him in seconds, praying he still had both of his legs. He hopped onto the back of the ski and started belting off some profanities looking down at his water housing, which was half full of water. His camera was toast. We gave him a ride back to the beach, gave our condolences and went back into the line-up for four more hours of unadulterated fun. 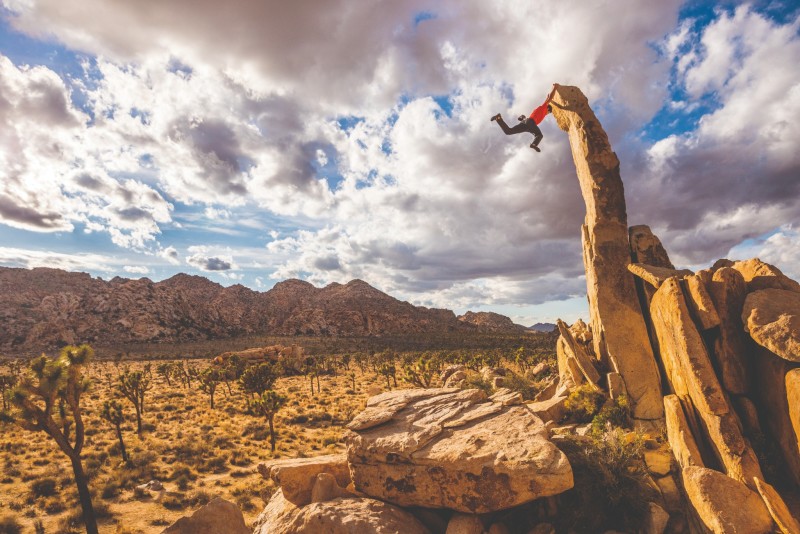 Self Portrait | Joshua Tree Someone once told me there is nothing scarier than a photographer with a vision. Well, I decided to one up that and be the photographer and the subject. I remember heading to Joshua Tree and seeing this image that Tim Kemple shot. I wanted the image for my portfolio so I set up my camera on a tripod and put it into time-lapse mode. It took me probably an hour to capture this image and over 30 attempts.

Since then, I had only seen Ryan at few social gatherings and a handful of times at various surf spots, so it wasn’t until recently that I noticed how far “seal boy” had come. With more than 23,000 followers on Instagram, he’s now shooting the world’s top surfers, landing covers of publications like the Outside Magazine Calendar and Freesurf, and is even scaling razor-edged tropical ridgelines sans safety ropes.  This kid had obviously persevered through those early stage road bumps and I was excited to catch up with the energetic entrepreneur.  This is what I learned…

Where did you grow up and when did you first pick up a camera?

I grew up in San Jose and was pretty much public enemy No. 1 in Santa Cruz, being a transplant as well as a bodyboarder. <Laughs> I loved the ocean and riding waves, so I put up with the heckles and made it a point to be on the coast as much as possible. However it wasn’t until I completed college that I picked up a camera and started to explore the world of still [photography] and video production, which fascinated and challenged me.

When and why did you take the leap and move to Hawaii?

In college, back in 2003, I took my first visit to the Hawaiian islands and absolutely fell in love with the place. However, it was always in the back of my mind that I would live in California and follow in the footsteps of my dad and uncle and become a firefighter. [But] I felt [photography]  was my calling, so I ended up moving to Oahu full time in 2016 to pursue my passion for photography and video production. 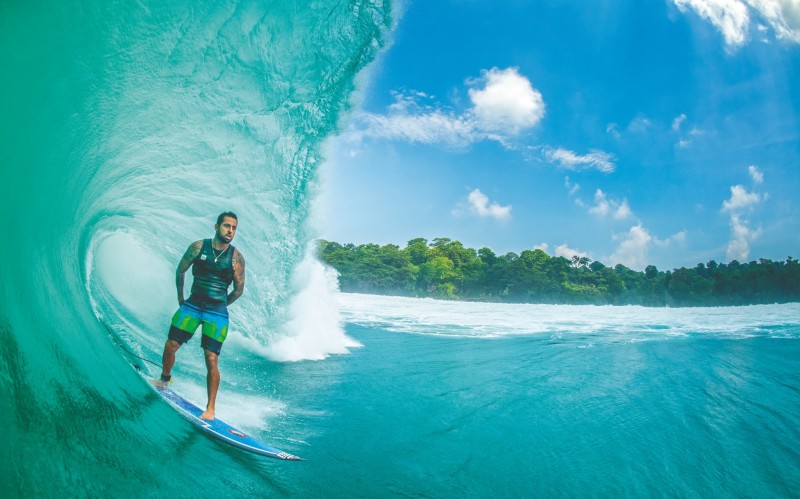 Billy Kemper | Apocalypse. This was the first real surf trip I ever went on. This wave is real. It’s powerful, unpredictable and scary. I feel like this is one of those waves that truly tests your ability as a water photographer and I was incredibly grateful to link up with Billy on this image.

When did you start climbing, and what do you even call this extreme activity of scaling tropical mountain ridges?

I started climbing and doing long ridge traverses back in 2012. I had just gone through a bad breakup and major heartbreak and needed to find something that truly cleared my mind. The ocean had become stale and just felt like an office. I could never separate the two after I made surf filmmaking my career. It was a pretty sad realization and low point. This thing that I spent 27-plus years loving and turning to for clarity had lost its magic from year after year of surf-industry politics and whatnot, so I decided to turn to the mountains. I have always been terrified of heights, so it’s pretty ironic that I fell in love with it the way that I did. There’s nothing like it. It has helped me find this state of mind where I can become hyper focused and enjoy something that I really should be terrified of. As for what it’s called … Maybe over-glorified strategic walking? I guess you could consider it tropical mountaineering. That’s the closest correct way to describe it. Of course that has led to me wanting to come back and explore Yosemite and climb some big walls and not such loose crumbly ridgelines.

Do you prefer still photography or video?

If you want instant gratification, still photography. If you want to really paint a motion masterpiece, video. But, I enjoy both equally.

What is your most memorable photography or video trip?

I’ve been incredibly fortunate to be invited on so [many] photo trips over the years. But, probably my first Fox [Fox Racing] trip down to Mexico with Dave [Nelly] Nelson and Josh Mulcoy was the most memorable—for all the wrong reasons. Here I was on my first company surf trip and right off the start I didn’t have a passport. I had a passport card and a lady told me it would get me into Mexico. Well that’s only by land and sea. So I missed my flight and remember being nearly in tears and so embarrassed and trying not to show my emotions to these heroes I was joining. The next day I got an emergency rushed passport and made the flight, so I only missed a day. It was the last day of the trip and the waves were maybe knee to waist high at this little point break and the light was shot. Nelly went and grabbed a board to go surf, so I took it as I could too. I was wrong. Later that night Mulcoy came in and just set me straight and laid it out for me saying that if you get invited on trip to shoot photos that is your job no matter what the conditions. I was pretty bummed because I had been grinding it out for days in blistering hot Salina Cruz sun and in my head there was no way any of that footage was ever going to see the light of day. After I had time to reflect, I realized Mulcoy was just looking out for me and I took those words and just never quit. I never let anyone outwork me. I don’t think I would be where I’m at today without all of that happening.

Winter is right around the corner and so is 36. I have to prepare to give a talk on “outdoor photography” and a video-editing workshop for PhotoCon, Hawaii’s photo trade show. I plan on heading to Yosemite to climb some big multi pitch climbing routes and Matthes Crest has been on my bucket list for a while. Other than that, just keep expanding my comfort zones in uncomfortable situations and continue to tell stories through still and motion pictures.