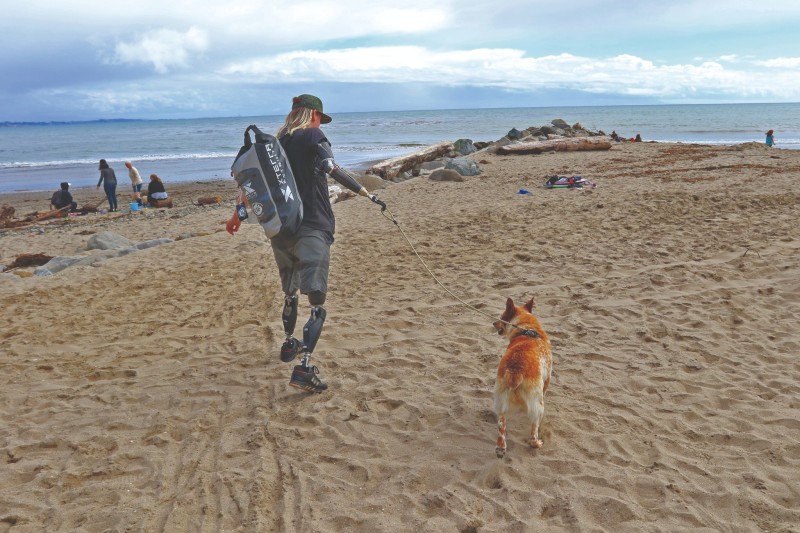 A participate with the Operation Surf organization gets some quality time with Skyler. Photo Guerin Myall

A considerable crowd lines the beach, eyes fixed on the sea, bearing witness to a touching sight: pro surfers sharing waves with wounded veterans, many of whom are missing one or more limbs. There’s hardly a dry eye on the shore. The next set of waves leads to an eruption of applause from the crowd. An Iraq war veteran is sliding down a playful wave, hanging on with giant smile. The man riding alongside him throws shakas while a Queensland Heeler perches on the nose, tongue hanging out and tail wagging furiously.

The pooch is Skyler, and she and her dad Homer Henard have been bringing their interspecies surf act to events like these for the past couple of years, combining surf and animal therapy in a unique and impactful way.

Henard, a former professional surfer, and Skyler have become true local celebrities in recent years this tandem surfing act. The 9-year-old cattle dog has been braving the punchy Santa Cruz surf with balance, bravery and panache since she was just a puppy.

“At first I started going out in the water with Skyler to get exercise on small days to keep the paddle arms going,” explains Henard. “We kept it up it, having an amazing time no matter the size of the waves. It was epic.”

Skyler shreds with such proficiency that she has no problem riding waves to the shore solo these days, so long as her loving pops provides her with a gentle push. She even competes regularly at “surf dog” championships up and down the coast, earning a victory at the 2015 “World Surf Dog Championships” in Huntington Beach. Her Instagram following has gone worldwide and her Jimbo Phillips-designed merch is flying off the shelf.

One day in 2016, Henard’s good friend Adam Replogle called him up and told him that he was working with Waves of Impact, a surf therapy program for children facing exceptional challenges. He asked if Henard might come down and bring Skyler, sensing the kids would get a kick out of the dog’s surfing skills.

“I didn’t know what to expect, but going down there with Skyler changed me forever,” Henard reflects. “I realized how important the kind of therapy [was that] my dog was providing these kids. They show up intimidated and scared of the ocean, but once they see Skyler jump on the board and paddle out with me, they get all excited, and the anxiety melts away. It’s a double dose of stoke!”

Once they are out there, instead of focusing on the waves, cold, or sharks, they’re focused on the silly sight of the surfing dog.

“Next thing you know they’re on a wave themselves, squealing with joy and grinning ear to ear,” Henard says. “During these high-energy moments of surf and stoke, I look at these kids and it’s like their disability goes away—it may be brief, but for that moment I’m just blown away at the power of these therapies. The highs and joy levels are crazy.” 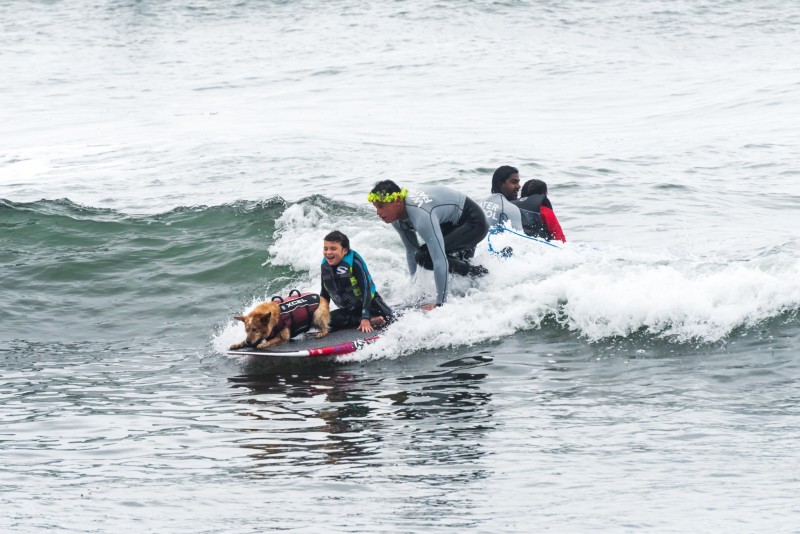 Since they started surf therapy, they’ve volunteered for organizations such as Mauli Ola Foundation, which takes kids with cystic fibrosis out in the water, and Operation Surf, another surf therapy program for wounded veterans.

The man/canine duo plans to expand its volunteer work by hitting every therapy event possible, starting in California and branching out internationally should the opportunities arise. The potential for healing is personal for Henard, who suffered a major head injury when he was 18 in a head-on car crash and woke up in a coma, losing a lot of information and memories—something that surfing and Skyler’s companionship have helped with greatly over the years. But it wasn’t until Henard was exposed to the brave, injured and ill men, women, and children he met as these events that he felt comfortable discussing his own struggles.

“Starting to tell my story, although vulnerable, has been another therapeutic thing,” Henard explains. “Surfing and animal therapy have saved my life and I’m so stoked we can bring it to others who can benefit from it.”