The western monarch population has plummeted in recent years. What does their disappearance mean, and what is being done about it locally? 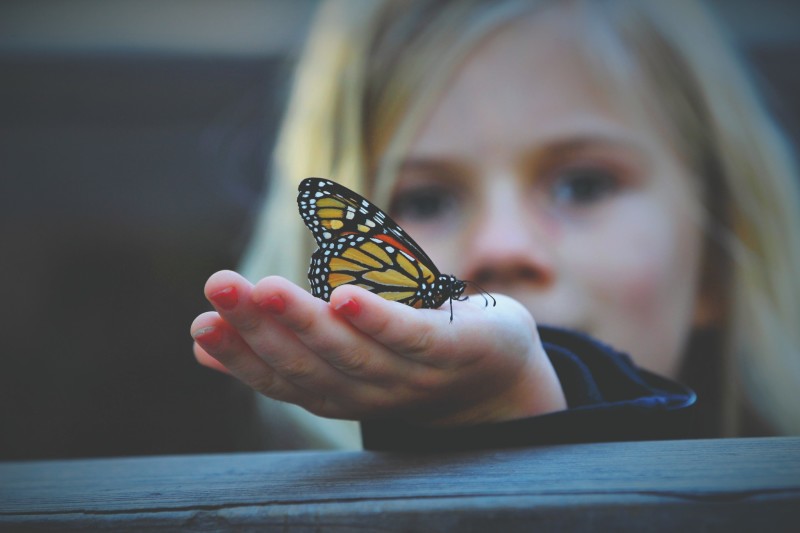 It’s fall and that means it’s time for the monarch butterflies to make their annual return to Natural Bridges State Park and to other monarch wintering spots throughout the Monterey Bay Area. The western monarch was first documented in California when a seafaring Russian expedition made landfall near San Francisco in October of 1816, but the iconic orange-and-black butterfly has probably been around for thousands of years.

In the 1980s, an estimated 4.5 million western monarch butterflies lived on the Pacific coast in California and Baja California, Mexico. But flash forward just a few decades to today, and their population has shrunk by more than 99 percent. While the reasons are not completely understood, experts agree that habitat loss, climate change and pesticide use are likely contributing factors.

“This past year was striking to see,” says Samantha Marcum, a coastal program coordinator for the U.S. Fish and Wildlife Service who has participated in numerous Thanksgiving Day counts in Santa Cruz County conducted by the Xerces Society for Invertebrate Conservation. “In some areas, I did not find any butterflies. At other locations, the numbers were disturbingly low. I kept hoping that the butterflies were going to show up late to the sites, but that did not happen.”

The numbers locally are stark. Of the 15 overwintering groves counted in Santa Cruz County in 2017, the three largest sites—Lighthouse Field State Park, Moran Lake and Natural Bridges—had approximately 12,000, 5,400 and 9,000 butterflies each according to Marcum, for a total of 26,400. Just one year later in 2018, the numbers at the same three largest sites dropped to approximately 1,800, 1,370, and 1,120 respectively—just 4,290 in all, or 84 percent fewer monarchs

Because year-to-year population trends can fluctuate, experts focus on long-term trends. However, those numbers are also alarming.

The monarch has become the West Coast’s canary in the coal mine. “They are definitely telling us [about] the health of our environment,” says Martha Nitzberg, a lead interpreter at the Natural Bridges monarch preserve. They also speak for other species that aren’t as prominently noticed by the public.

“Monarch declines are an indicator for the health of ecosystems across North America and the status of the larger pollinator community,” explains Marcum. “Restoration and protection of monarch habitat provides benefits to many species including other butterflies, bees, and birds.”

It’s fitting that the well-loved monarch is the messenger. Many of us have fond childhood memories of school field trips to visit tree-clustering monarchs or collecting a caterpillar and releasing it as a butterfly in spring. Schools, outdoor festivals and film festivals embrace the monarch as their namesake throughout the state. The majestic monarchs are also popular with eco-minded tourists who spend vacation days and dollars to see them.

While other species may contribute more tangibly to benefits like plant or crop pollination, the monarch is an apt bellwether to bring attention to the plight it shares with bees, beetles, flies, moths and other butterflies.

“It’s kind of a gateway insect into caring about pollinators,” says Emma Pelton, an endangered species conservation biologist for the Xerces Society, who notes that other pollinators face the same stressors that monarchs face. “Losing monarchs is a little bit of a wake-up call that we’re losing a really widespread, common butterfly that conveniently we’re able to count because they cluster. But there are tons of other butterflies that we also know are declining as much or more than monarchs. They’re unique because of their incredible migration, but unfortunately not unique in that a lot of our butterfly species are at risk and are declining.” 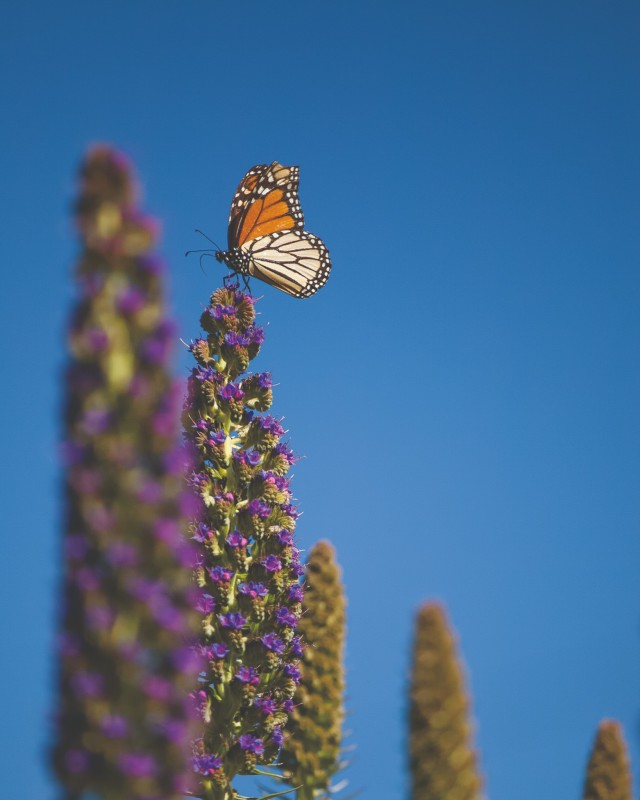 The story of the western monarch’s migratory voyage verges on the magical—a multi-generational epic worthy of our fascination. Imagine yourself as a monarch making a long journey to a coastal oasis such as Santa Cruz. Picture yourself replenishing over winter with nectaring flowers while communing with fellow travelers. Rejuvenated come spring, the monarch ventures inland, finds its mate, and lays eggs on succulent milkweed. Hatched caterpillars become butterflies—offspring who continue the parent’s quest after its short time on this earth is done. Imagine your “kids” then fly east and north, with succeeding generations eventually reaching as far east as the Rocky Mountains and as far north as southern Canada. When the cold of winter approaches again, the latest of your line return to the California coast—a place they have never been before and the same place your journey began—ready to start the cycle again.

On every leg of that journey, the western monarch faces challenges, as does a largely separate eastern population that winters in central Mexico. The monarch’s migration is a delicate balance of many things that must go right and disturbances to their habitats can upset that equilibrium.

Because there is no single silver bullet to fix the problem, the Xerces Society website presents a five-part plan of action to help save western monarchs. It includes protecting overwintering sites, restoring breeding and migratory habitats in California (which have suffered from land development incursion and loss of milkweed near Central Valley farms), and reducing agricultural and home use of pesticides. Efforts to protect and restore summer breeding and fall migration habitat outside of California and to find answers to key scientific research questions are also crucial elements of the plan. One focus locally is to improve overwintering sites.

“Many overwintering groves are becoming more degraded as time goes by with trees and limbs falling or being cut down,” says Marcum, who notes that the overwintering season is a critical, vulnerable time for clustering monarchs. “Changes to the groves are apparent in some cases, including noticeable wind tunnels that can form when trees are removed.“

Natural Bridges’ non-native but monarch-friendly eucalyptus trees provide monarchs both shelter and a source of nectar, according to Nitzberg. State park workers and volunteers have worked to shore up the grove’s eucalyptus, cypress and pine trees, the latter of which has dwindled in number from disease.

At Lighthouse Field—a lesser known but also important local monarch site—the Fish and Wildlife Service is working with California State Parks, the Xerces Society and local non-profit Groundswell Coastal Ecology to protect, restore and manage its overwintering habitat. The management plan crafted for Lighthouse Field is now used as a template for other overwintering sites.

Groundswell Coastal Ecology is implementing a wide range of land management practices at Lighthouse Field including reducing monarch-harming wind tunnels with planned tree planting and maintenance, adding nectar plants that bloom in late fall and early spring, and reducing monarch mortality by eliminating food waste that attracts predators such as yellow jackets and rodents, according to director Bill Henry. The organization also engages the local community and K-12 schools in hands-on stewardship.

Henry urges visitors to overwintering habitats like Natural Bridges and Lighthouse Field to adopt practices to help the monarchs such as not feeding wildlife, disposing of garbage in predator-proof waste cans, and to participate in community pollinator events such as the one planned for December at Lighthouse Field.

Other ways for individuals to aid the monarch include planting native milkweed and native flowering plants in regions where they occur naturally. The Xerces Society website provides a helpful interactive map to determine if people live in coastal zones where nectaring flowers are needed or inland zones where both can be planted—with 5 miles from the coast being a good rule of thumb. The site also gives recommendations for native species of each plant since native plants typically require less water and are more resistant to climate change. Coastal residents can also volunteer to count monarchs or become docents at sites like Natural Bridges.

The public can help with scientific research by uploading pictures taken of milkweed and monarchs using the Western Monarch Milkweed Mapper, the Monarch SOS app, or the INaturalist app; and using the #SaveWesternMonarchs hashtag on Facebook, Twitter, and Instagram.

“There have actually been studies showing that the rates of pesticide use are much higher in urban areas than in agriculture,” says Pelton, who stresses not using pesticides to make gardens prettier. “Having a perfect lawn actually exacts a toll on the environment. A lot of the chemicals accumulate and our fresh water system is harmed.”

Experts hope that steps taken by scientists, habitat managers and the public to protect monarchs will help their numbers rebound. The loss of the popular monarchs would also signal an upending of the delicate environmental balance required for a host of other species.

“Ecosystems are an interconnected web of organisms and processes and every species impacts the balance of the system,” says Marcum. “It is balance that allows an ecosystem to function in a healthy and efficient manner and an imbalance in one area of the system can have a ripple effect on other parts of the system. Humans are part of these systems as well. Monarchs … migrate across many different habitat types to complete their annual migration cycle. We want to ensure that the monarch migration phenomenon continues and that the species thrives.”

Visit xerces.org, fws.gov, and groundswellecology.org to find further information on protecting monarchs. Welcome Back Monarch Day will take place at Natural Bridges on Oct. 13, followed by the Migration Festival on Feb. 8, 2020, also at Natural Bridges. Learn more at thatsmypark.org or by calling (831) 423-4609.