How a senior thesis morphed into Watsonville’s new sustainable brewery

College kids are known for “studying” beer in their spare time, but it’s not often a student makes the science of beer their official senior thesis—one that continues to inform their career long after graduation. 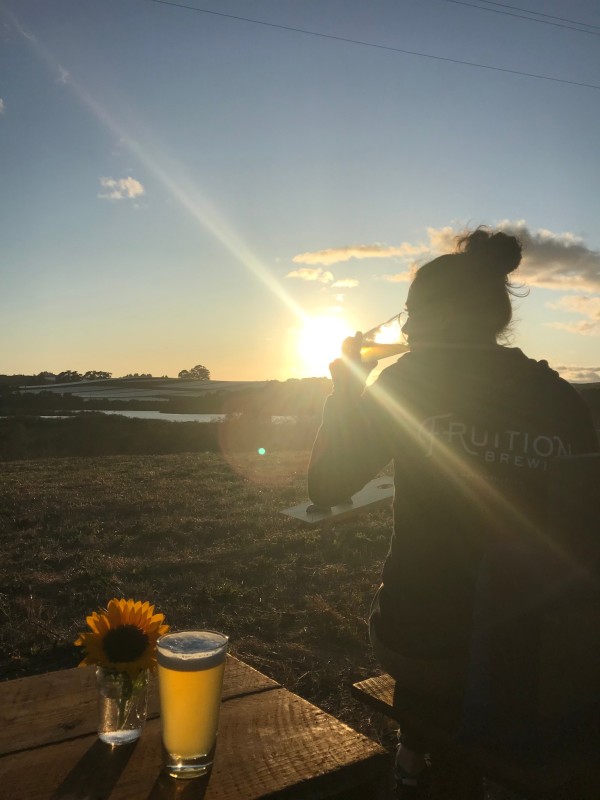 As of this writing, the couple lives in Live Oak but is looking to move to Watsonville, where it has both a young business and some old family history—Purgason’s great grandfather built a house there in the late 1800s.

Purgason first started homebrewing beer as a 19-year-old at UC Santa Cruz, where he majored in environmental studies with a focus on sustainable food systems and agriculture. At that time he and a buddy were simply brewing “for friends and concerts and quasi-legal events.”

At 21, still young but forward-thinking, he took his passion project into the classroom with a senior thesis titled “The Sustainability of Craft Beer in California.” It was, he says, “an excuse to go to every brewery we could and pick the brains of everyone behind them and learn.”

That grain-to-glass look at the economics, water consumption, and grain usage in beer-making inspired Purgason to know not only where everything comes from during the process, but also how it could be improved.

Now 29, he and Preston are putting that knowledge to use at Fruition. Buying all California-grown grain and organic as much as possible, the co-owner says, “We try to support our local community and farmers so that we’re not creating such a huge footprint.”

Fruition makes 200 to 300 gallons of beer at a time but serves directly from one single tank, which makes for a brewery-to-taproom operation. “We really try to serve everything from our bright tanks and cold box instead of filling tanks and cans or delivering kegs, because it saves on water, chemicals, time, and labor.”

The craft beer hub located in East Lake Village Shopping Center uses repurposed wine and dairy tanks for its brewing process because, Purgason philosophizes, “You make do or you do without; we couldn’t afford brand-new equipment.”

The recycled materials are more than just cost-saving—they reflect the owners’ values. Purgason says, of the two brewing tanks sourced from Craigslist and the three fermenters inherited from Capitola’s Sante Adairius Rustic Ales, “Frankly, they’re better quality, made in America, and not being shipped on a slow boat from Asia.”

With flavors like olallieberry and hibiscus making their way into some craft concoctions, the couple’s appreciation for the plentiful agricultural region in which they live is evident in the name itself.

“Fruition translates into bearing fruit, and we like using the local fruit of our area and supporting local farmers,” the brewer begins. “I would rather know the farmer and be able to shake their hand and ask them how they grow.”

Having now opened his own brewery with sustainable practices, how did that senior thesis—which Purgason calls a “choose your own adventure” class assignment—end up scoring back in the day? “I got an A.”