Will your next burger be grown in a lab? 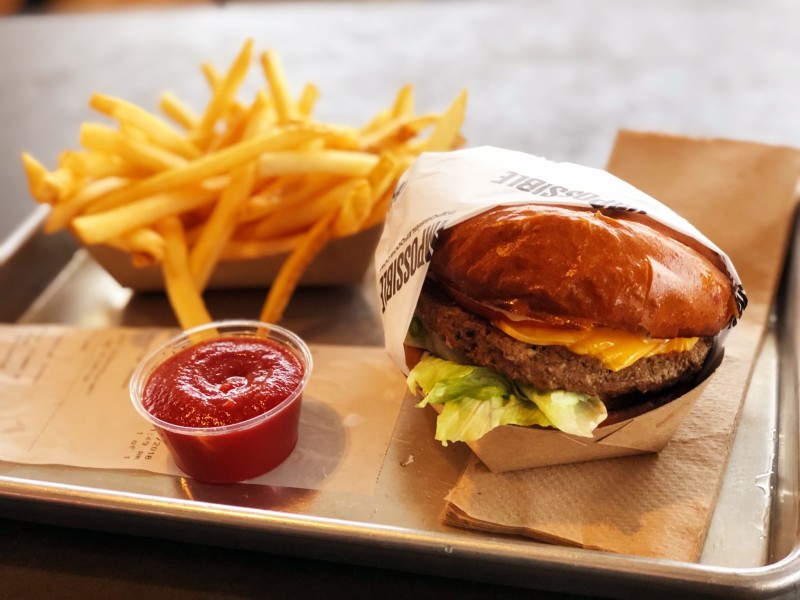 In the not-too-distant future, eating beef, chicken, and even tuna will not require the death of an animal. “It’s meat grown through cellular agriculture in what look like meat breweries—no animal slaughter required.” says Bruce Friedrich, director of the Good Food Institute, a company that works with scientists, investors, and conventional meat companies to bring “cell-based” meats to market.

Unlike the countless varieties of meat alternatives on the market today, the meat is 100-percent identical to animal flesh. Stem-cells are taken from an animal and put into cultivator facilities that mimic the biological process that happens inside an animal by providing warmth and the basic elements needed to build muscle: water, proteins, carbohydrates, fats, vitamins, and minerals.

When most people hear about this innovation, their first reaction is something along the lines of, “what if something goes wrong?” It sounds like the premise of a sci-fi movie starring Will Smith, where a virus infects the public through the transmission of a burger patty and turns the population of New York into zombies. “Time to turn these zombies back into roast beef!” the Fresh Prince might say with his AK-47 locked and loaded. Ironically, though, according to the Centers for Disease Control and Prevention, tens of millions of Americans already get sick every year from eating contaminated meat, and thousands die. We just have a different name for our zombie outbreaks; we call it e. coli.

The meat industry has filed several lawsuits that would prohibit cell-based meats from being sold in the same area of the supermarket as traditional meat. The National Cattlemen’s Beef Association wrote last year in a letter to the USDA, “cell-cultured meat manufacturers must not be permitted to use the term ‘beef’ or any nomenclature associated with traditional livestock production.” Groups like The Good Food Institute have pushed back with the argument that cell-based meats are every bit as real as conventional meats. If someone has a beef allergy, they will also have an allergy to cell-based beef. While The Good Food Institute is working with meat manufacturers to get cell-based meats into their product line, they are also working to shepherd the most appealing narrative into the public. Friedrich and his team have conducted studies to test the most appetizing nomenclature. The studies found that “cell-based,” “cultured,” “clean,” and “slaughter-free” were effective terms. Meanwhile, terms like “lab-grown” were less appealing.

When it comes to market adoption, names matter. One well known example of this is the story of the avocado. Up until the early 1900s the avocado had never been commercially sold in California. The Spanish name aguacate was too difficult for most English speakers to pronounce, so it was named the alligator pear. Unsurprisingly, California farmers had a hard time selling a fruit named after a flesh-eating monster. Growers lobbied to change the name to avocado, and the marketing ploy worked: today, over 90 percent of avocados sold in the U.S. come from California.

The success or failure of the market adopting cell-based meats will have significant consequences for our planet. Scientists at the United Nations have written that animal agriculture contributes about 40 percent more to climate change than all of the planes, trucks, cars, and other forms of transportation combined. Farm animals use about 80 percent of all antibiotics produced in the U.S. and this steady stream of antibiotic-laced meat has given way to resistant “superbugs” which now render many of our antibiotics useless.

Cell-based meats require significantly fewer natural resources, no antibiotics, and no animal slaughter. A study by researchers at Oxford and the University of Amsterdam found that cultured meat could reduce the energy needs of meat generation by up to 45 percent, and require only 2 percent of the land. In the face of a projected population of 9.7 billion by 2050, many tout cell-based meats as a solution to simultaneously feed the world and tackle the head-spinning issues mentioned above. 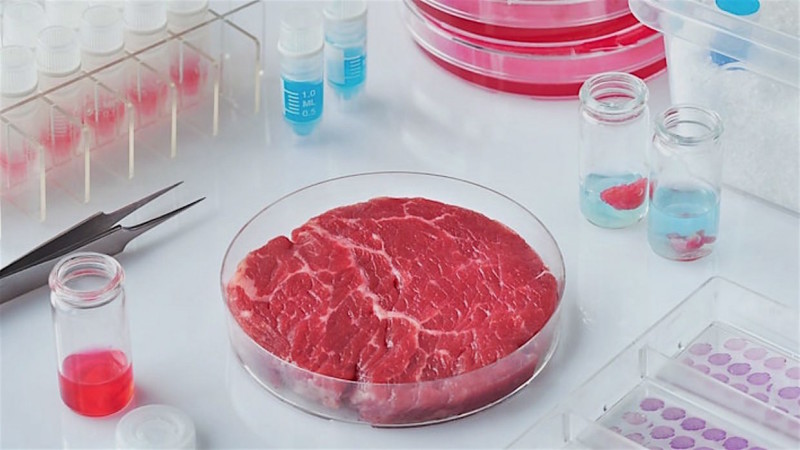 For some, a more digestible alternative is a new generation of plant-based burger. The most successful of these are the Impossible Foods burger and Beyond Burger, both of which are now available in grocery stores and at restaurant chains across the country.  When Burger King released its Impossible Whopper earlier this year, overall sales increased significantly at their test locations. The main ingredients are soy and potato protein, coconut and sunflower oils, and food starch, which holds it all together. But the “magic” molecule that makes the new veggie burger taste meaty is a compound called Heme. “Heme is the molecule that grabs the oxygen in your lungs and carries it around your body,” says Pat Brown, founder and CEO of Impossible Foods. It’s also what gives meat its bloody taste. Heme is found in every plant and animal on earth, but most abundantly in animals. Scientists at Impossible Foods were the first ones who figured out how to extract Heme from genetically engineered soy, insert it into yeast, and ferment the yeast. The result is a plant-based burger that some longtime vegans have reported disliking because it tastes too bloody.

However, vegan doesn’t necessarily translate to healthy. Although the new plant-based burgers contain 0 percent cholesterol, they are highly processed. According to Men’s Journal, the Impossible Burger has more than double the saturated fat of an 85-percent lean beef burger: 3.6 grams per ounce (derived from coconut oil) versus 1.7. It also has over seven times the amount of sodium as beef.

Many are choosing plant-based burgers for ethical reasons. Polls consistently show that industrial farms don’t sit well with the public. Last year, Oklahoma State University researchers found that fully 68 percent of the public said they had discomfort with the way animals are used in the food industry and 47 percent support banning factory farming.

As a hunter, I can attest that harvesting an animal can be an emotionally raw experience. They think. They feel. They look you in the eye when you take their life. The difference between hunting and buying a Big Mac is your willingness to meet their gaze.

While factory-farmed meat is a bad choice, both ethically and environmentally, an Impossible Whopper grown from genetically engineered mono-cropped soy fields also kills animals along the way. Over one-third of all land in the U.S. is dedicated to industrial agriculture, and in the process of clearing this land, forests fall, rivers are drained, and every living creature that depends on the ecosystem dies. Chinook, bison, sparrows, grey wolves, and mice are just a few of the victims.

Lierre Keith, author of The Vegetarian Myth writes, “the truth is that agriculture is the most destructive thing humans have done to the planet, and more of the same won’t save us.” Keith argues that eating grass-fed cows raised in a pasture is healthier and better for ecosystems than eating a vegan diet that consists of mono-cropped soy, corn, and wheat.

The current population on earth is about 7.6 billion people. Large-scale industrial agriculture has allowed for this growth, but now, all around us, ecosystems are buckling. The phrase, “In order to feed a growing population” is used in nearly every article I’ve read about food security. Although people hate to talk about it, the only reason we need to feed a growing population is because people keep breeding. It may be less sexy than showing off your new Prius, but having fewer children is one of the greenest things you can do. Researchers from Lund University in Sweden found that having one fewer child per family can save an average of 58.6 tonnes of CO2-equivalent emissions per year.

One of the most effective ways to lower birth rates is education. According to The World Economic Forum, Bangladesh ran campaigns to change people’s attitudes to family size and to increase the use of contraceptives among married women. As a result, fertility decreased from an average of more than six children per woman in 1975 to slightly more than three today. 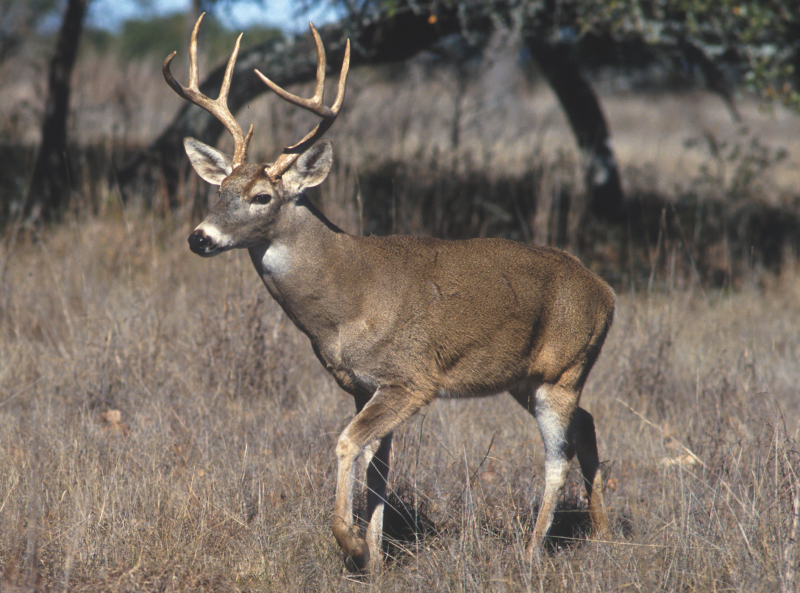 While education might be the most powerful tool for saving the world, the second most powerful is shifting your diet away from industrial agriculture. If cell-based meats are brought to market and made cheaply enough to be adopted by the masses, it will have major benefits.

U.S. regulators will introduce rules for cell-based meat products later this year, and companies plan to launch their first commercial products soon after. Leading American cell-based meat companies have gotten the price down to about $50 per pound, but like early cell phone costs, the price will drop as mass adoption grows. While plant-based burgers like Impossible and Beyond Meats may only ever occupy a small portion of the market, cell-based meats have the potential to turn our current food system on its head. Kristopher Gasteratos, founder of the Cellular Agriculture Society, predicts that by the end of the century, intensive animal agriculture will be phased out entirely and all meat will be grown using stem-cells.