How an unconventional board rekindled this shaper’s love of surfing 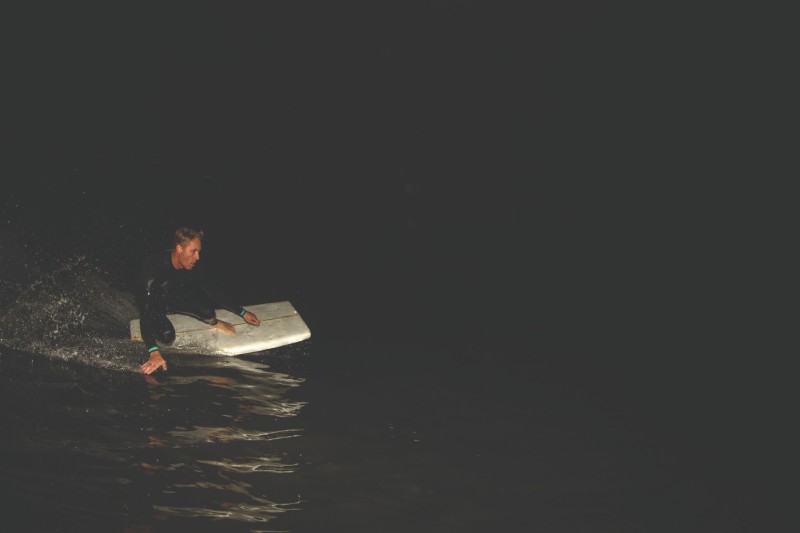 Our local board-building community has produced loads of unusual and eccentric shapes over the decades. Whether head trauma from skull-rattling swells or fumes from toxic board materials are to blame, there are plenty of local shapers whose ideas about surf design are unorthodox, to say the least.

Joshua Denning can be counted among these “outside-of-the-box” shaping savants, yet there is a method to his madness. A true student of the craft, Denning’s shaping started with traditional tools and techniques, later diverting into distinct and unique ideas regarding what kind of board would best maximize his stoke.

Born and bred in Bakersfield until age 14, Denning had his work cut out for him when he moved to Santa Cruz. Learning to surf in a hotly competitive environment that routinely scorned outsiders was no easy task in the early ’90s. Denning was able to overcome these handicaps, mastering surfing at a breakneck pace; soon he was being scouted by surf brands for sponsorships, winning contents, and even being profiled in full-length surf film, Respect, in 1998.

As time went on, surfing started becoming a “job” for the humble ripper, so he shifted his focus to surfboard building. Through the tutelage of shapers such as Steve Coletta, William “Stretch” Riedel, and Randy French, Denning learned the ins and outs of the craft. It was around this time when he became inspired by the exploits of experimental shapers like San Diego’s Ryan Burch, deciding to forgo conventional techniques altogether.

Under the watchful eye of French, Denning created the “Foamy” —a lightweight craft he could use in any conditions that enabled him to have a ball: picking off waves that most serious shredders would scoff at, perfectly content to slide and spin on the scraps.

Here,Denning reminisces on how this free-flying foam creation took shape:

“Something happened to me that I never thought would—I fell out of love with surfing. It felt like there was too much pressure to perform, so I literally stripped it all down and decided to shape a board that would enable me to have fun while still offering a challenge. Seeing what Burch was doing on his crazy asymmetrical and unconventional shapes, I wondered what it would feel like to ride an unglassed hunk of foam without fins. The idea was to see how seriously I could not take my surfing seriously. [Laughs.]

The breakthrough for the development of the ‘Foamy’ happened when I called Randy French and asked him if I could use his shaping room, tools, [and] materials, as well as his guidance, to help me bring my dream to life. To my surprise he agreed with enthusiasm, saying, ‘Anything to get me out of the office and into that shaping room!’ I showed up the next morning and explained to him what I wanted to accomplish and create together. He walked behind a shipping container into a thicket of wild berry bushes to find a large block of closed-cell foam that was 20-feet long, 4-feet tall, and 3-feet wide [and was] consumed by prickly vines.

I rushed home, grabbed some gardening tools, and got to work, hacking the foam free from the bushes. Once I’d cleared out enough space, we used a huge, electric Hotwire to cut a massive chunk for me to experiment with.

The shape I finished was about 5-feet long and 2-inches thick. The foam was brittle, which made for a very flexible board. French thought it would break if I tried riding it and suggested cutting it down the middle and gluing it back together with epoxy resin. He told me not to worry, but I was stressing inside during the process. The result was far from a perfectly flat shape, but French jumped in with his planer to help with the finishing touches. The result was a perfectly flat, sharp-railed 5-foot-by-2-foot-by-4-foot, stringer-less miracle that is still my go-to board to this day.”