There are already plenty of awards that celebrate efforts to protect the natural environment. But Mother Earth is losing, and it’s time the winners got their dues. The first annual Motherfucker Awards, which I co-created with author Chris Ryan, set out to do just that: celebrate the companies that fucked Mother Earth the hardest in 2018. Categories included Land, Water, Air, Fire, Spirit, and Reality.

Chris and I hatched the idea in early 2018, penning a manifesto in about nine minutes for a project that would go on to take up the next nine months of our lives. It culminated in a sold-out event in LA on Dec. 4 and a long “holy-shit-I-can’t-believe-we-pulled-that-off” hug between us backstage when the curtains closed.

The project was fueled by rage. Rage that, despite our best efforts, things seem to be getting worse on our home planet. Rage that a sociopathic corporation can so easily hide behind a clever ad campaign. And rage that in America today people get more offended by a word like “motherfucker” than they do about the idea of a corporation fucking Mother Earth.

But, as film historian Cecile Starr was credited with saying, “If you want to tell people the truth, you’d better make them laugh, or they’ll kill you.” The image of a shouty environmentalist is about as appealing as hair in your lasagna, and although contemplating an issue like plastic pollution is capable of inducing rage in even the most experienced zen practitioners, it is, at its core, a repugnant emotion. So, we chose to have comedians represent the “winners,” giving acceptance speeches they wrote themselves. Journalists and activists prompted the comics with facts about their companies’ “achievements.”

Chris and I both host podcasts on which we often interview interesting and funny guests, and, once we’d built a barebones website for the event, we asked some of these bold folks if they wanted to be involved. When pitching a project without funding, it’s difficult to overstate the importance of getting a laugh out of the person you’re wooing. World-renowned journalists like Matt Taibbi from Rolling Stone and Abby Martin from RT America chuckled at the concept and responded enthusiastically. Comedians like Natasha Leggero, Moshe Kasher, and Simon Rex (aka Dirt Nasty) were also quick to get on board.

We matched each comedian with a presenter and gave them a basic list of facts about their company’s achievements. Leggero and Kasher, for instance, accepted on behalf of Chase Bank, the No. 1 financier of tar-sands energy, one of the dirtiest fossil fuels on the planet. On the big night, the duo played sibling heirs to the banking fortune, riffing on how their love of profit was only second to their love of being in an incestuous romantic relationship. Since we released the video online, Chase Bank has not yet responded to our requests for an interview, but we hope they’ll come around soon.

There were hiccups, of course. The show started late, and the projector failed at one point, but overall we succeeded in making people laugh in the face of some of the most depressing issues of our time. Assuming our winners don’t sue us into the fetal position (theoretically we’re protected under parody clause), we will host another show next winter. In a lot of ways, this project was cathartic for me. Rather than spew my rage on a street corner or cover it with a thin veneer of false optimism, I was able to process it in the shape of one big fat dark laugh about the end of the world. 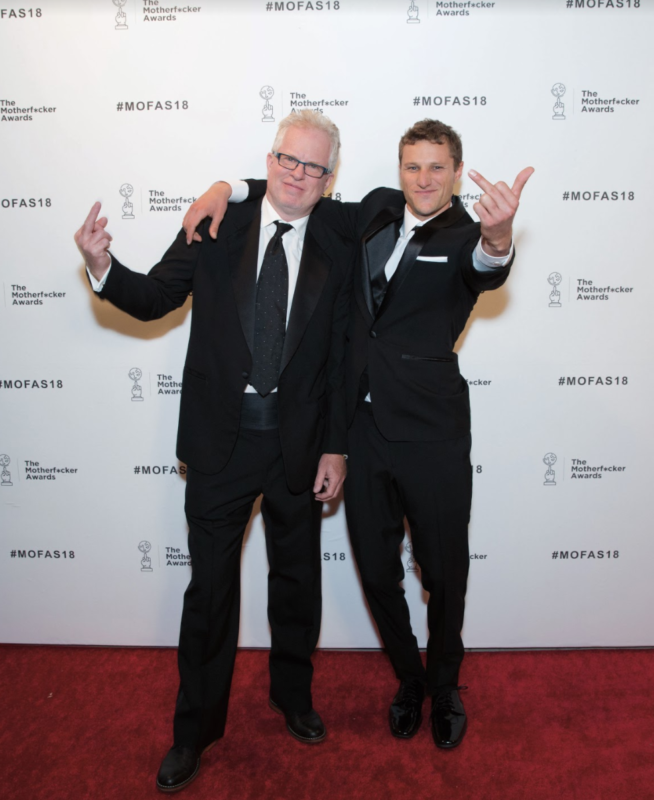 Chase is the No. 1 Wall Street funder of tar sands—one of the dirtiest fossil fuels on the planet. Their investments in the tar sands sector directly result in human rights abuses and environmental disasters.

Fire
for bringing us closer to a post-apocalyptic hellscape …

PG&E equipment was responsible for at least 17 of 21 major fires in Northern California in the past year. Many of these fires were due to lack of powerline maintenance. 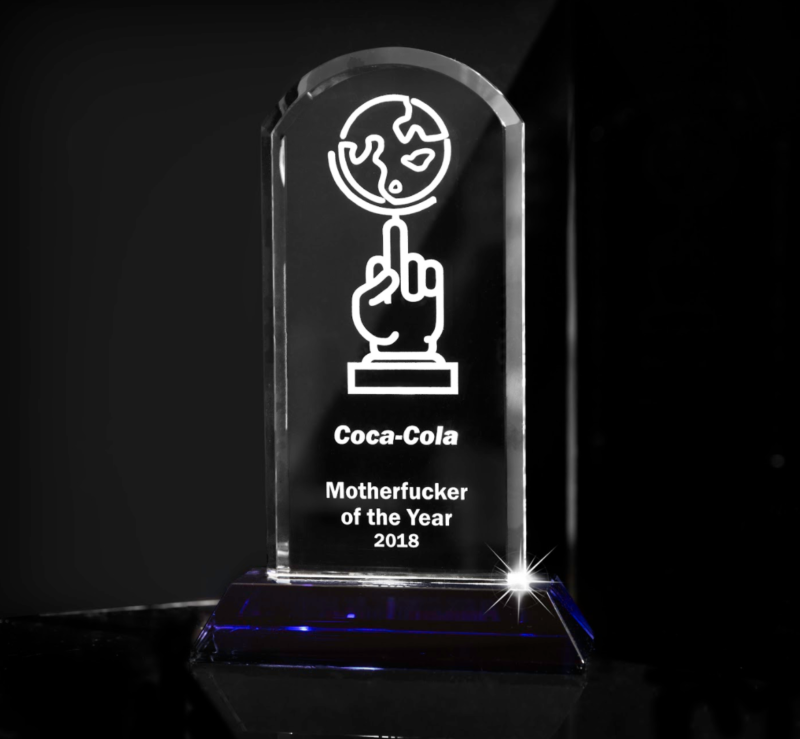 Water
for taking the biggest piss in the global pool …

The equivalent of one garbage truck of plastic enters into our seas every minute, every day, all year long. This year, about 10,000 volunteers from the Break-Free from Plastics movement conducted trash cleanups in 42 countries in an effort to identify the brands that contributed most significantly to plastic pollution in 2018. Coca-Cola was identified as the largest plastic polluter to our oceans globally.

Land
for making dirt dirtier than ever …

Tyson dumped millions of tons of pollutants into U.S. waterways. Drinking water contaminated with nitrates is linked to cancer, birth defects, and thyroid problems. Fertilizer pollution is also the leading cause of annual toxic algae blooms that cause Dead Zones in waterways across America.

Spirit
for outstanding efforts to break the human spirit …

Purdue Pharma is responsible for bringing Oxycontin to market, and triggering one of the largest health crises in U.S. history. The company was fined $600 million dollars for false marketing practices that obscured the drug’s addictive qualities. Opioid overdoses are now the leading cause of death among young people in America, ahead of car accidents and gun violence. Purdue Pharma will report over $35 billion dollars in earnings this year.

Reality
for the best mind-fuck …

Facebook’s targeting techniques track users and nonusers on other sites and apps. The company collects data on your locations, spending habits, and political beliefs to sell to advertisers without your consent. This data is used to influence elections.