When Santa Cruz Waves magazine was born in 2014, its identity revolved largely around the surfing lifestyle and the beauty of Santa Cruz. But what began with a pure, blissful passion for the ocean quickly grew into a dedicated outlet for environmental education and inspiration. Soon that evolved into a commitment to protection and activism, as well.
Growing up in Santa Cruz, and spending much of that time living on boats and sailing on the Monterey Bay, my own pull toward writing stories about the natural world—especially the health of our oceans—found a comfortable fit with Santa Cruz Waves’ mission. Over these past five years, I’ve had the opportunity to write dozens of eco-centric articles, with subjects ranging from local water quality and home sustainability tips to plastic contamination and humpback whales becoming ensnared in commercial fishing gear. With half a decade in the rearview mirror, here’s a look back on five of the environmental articles that have marked my path as a writer with Santa Cruz Waves, and that represent the sort of meaningful reporting we will continue to bring readers in years to come.

For a decade, Cowell Beach—one of the most prized surf breaks in the state—has been plagued with a complex problem: an intermittent, yet troublesomely frequent water contamination issue. For eight years, Cowell’s was hit with the worst water quality rating statewide on the Heal the Bay’s “Beach Bummer” list, with a slight improvement in 2018. In a comprehensive effort to improve the water quality and keep Cowell’s safe for recreation, a coalition of agencies called the Cowell’s Working Group (CWG) was formed in 2014 and has been collaborating ever since to identify and isolate the contamination sources, generate awareness around the scientific methods being employed, and restore the public’s faith in the beach’s waters.
As reported in our 2014 In Depth feature, “Troubled Waters,” a key complication for Cowell’s is its lack of ocean current circulation, especially in summer months when large swells diminish and tourism surges.
With partners from the City of Santa Cruz, The Sierra Club, Santa Cruz County, the Surfrider Foundation, and the nonprofit Save the Waves, the CWG has instigated a number of improvements, like sealing off a storm outlet vault that connected Neary Lagoon to Cowell’s, installed steel netting under the wharf to prevent birds from roosting, and developed an unprecedented scale of cross-agency problem-solving around a single issue.
“Together we have been able to take on one of California’s most challenging water quality issues and reduce it significantly,” says Save the Waves Executive Director Nik Strong-Cvetich, who facilitates the CWG. “There is more work to do, but we know we have the right group of people working on it.”

2) From Vol. 2 Issue 1: The Great Pacific Garbage Patch
The story of plastic waste contaminating almost every corner of our oceans—including, as we recently discovered, our very own Monterey Bay—has reached a fever pitch of environmental dread across the globe. Each year, millions of tons of plastic waste, the majority of which is derived from single-use, petroleum-based plastics (think water bottles and conventional plastic bags), makes its way down rivers and out of landfills into our oceans. Once that refuse is in the sea, it floats with ocean currents, slowly breaking down under the sun into smaller, confetti-like pieces—but never actually biodegrading—and eventually accumulates in one of the planet’s oceanic gyres at the vortex of all the currents.
The North Pacific Gyre is the planet’s largest such vortex, and the site of the largest accumulation of plastic waste. Known by some as the Great Pacific Garbage Patch, the North Pacific Gyre has been estimated to contain 3.5 million tons of trash, 90 percent of which is plastic debris, floating in the water column and distributed throughout the currents’ circulation region—about three times the size of France.
The story of plastic waste filling up the world’s oceans hit home this summer when the journal Scientific Reports published new research by the Monterey Bay Aquarium Research Institute (MBARI) and the Monterey Bay Aquarium, which discovered plastic debris in the middle of the Monterey Bay (our National Marine Sanctuary) at depths down to 3,000 feet in densities above those found in the Great Pacific Garbage Patch.
Since publishing this article, a movement has grown around the plastic contamination crisis. Artists have begun to incorporate reclaimed plastic waste into their work, some have committed themselves to living plastic-free, and one local nonprofit—Clean Oceans International—is working to develop scaleable processes around converting plastic waste into clean diesel fuel. 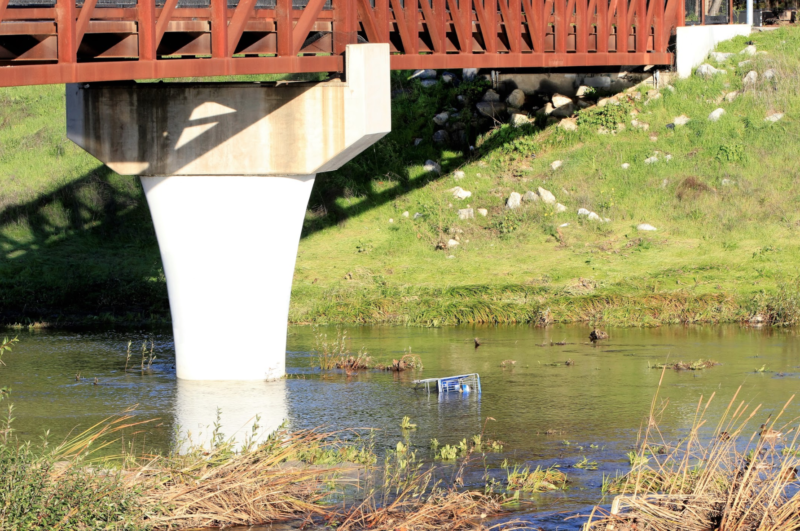 The San Lorenzo River runs through the heart of downtown Santa Cruz, from the mountains to the sea. Its history defines much of Santa Cruz’s enduring culture—three Hawaiian princes famously surfed redwood longboards at the river mouth in 1885, sport fishing was a major draw, and summertime “Venetian Water Carnivals” once hosted ornate boats traversing the San Lorenzo’s waters. But much later, during the ‘50s, flooding issues and levee development turned the central river into what some have described as a “back alley,” where, until the last few years, many residents have been afraid to recreate.
But one local nonprofit has taken on the mission of turning all that around. As reported in the 2017 In-Depth “Saving the San Lorenzo,” the Coastal Watershed Council (CWC)—formed in 1995—has been working to cultivate new bonds between the local community and our river.
Their efforts have included hands-on educational fieldwork, water-quality monitoring, river-centric events, and guidance around long-term urban planning along the riverbanks. The initiative is especially important given the critical nature of the river water itself—it represents 54 percent of the city’s water supply, so we better take care of it.
“We’ve shifted 100 percent of CWC’s programs to focus on this critical natural resource that the Santa Cruz community relies upon and impacts every day,” says Executive Director Greg Pepping. “We couldn’t do this work without the tremendous support of our partners at the City of Santa Cruz and local schools, donors and supporters and the incredible volunteers who drive this transformation of the lower San Lorenzo River.”

On a recent morning this June, about a dozen environmental activists put on wetsuits on San Carlos Beach in Monterey, leveling their gaze on a massive cruise ship anchored just offshore. The group of protestors, organized by Santa Cruz Waves founder and big-wave surfer Tyler Fox, mounted surfboards and a few SUP boards, and paddled their way out about a quarter mile to the ship.
Holding a large banner—which featured an illustration of a toilet—the small floating crowd passed around a megaphone voicing their disapproval of cruise ships frequenting the Monterey Bay National Marine Sanctuary. The cruise ship in front of them was of particular interest. It was part of the cruise line Crystal Cruises, who’s ship—the Crystal Harmony—had illegally dumped 36,000 gallons of wastewater into sanctuary waters in 2003. The incident got the cruise line banned for 15 years, as we reported last year in the In Depth piece “Floating Cities.” This was the Crystal Harmony’s first visit back.
Cruise ships have acquired an increasingly nasty reputation around the world, specifically for several high-profile criminal cases based on illegal waste dumping, as well as their air pollution. Estimates show one cruise ship at sea can give off the same amount of emissions as somewhere in the ballpark of a million cars.
In an effort to raise awareness around the issue, Santa Cruz Waves has embarked on a campaign, along with a number of partners, to ban cruise ships from operating in the Monterey Bay National Marine Sanctuary, and has garnered more than 19,000 signatures on a Change.org petition. Stay tuned to learn how this story plays out. 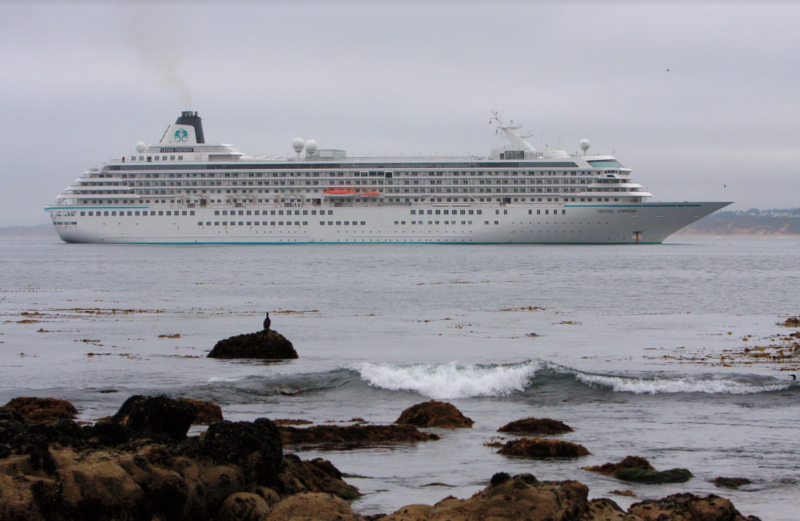 Back in 2015, there was a surge in the number of whales becoming entangled in fishing gear along the West Coast of California, particularly highly migratory Humpback whales, which can weigh upward of 80,000 pounds and grow up to 60 feet long. The National Oceanic and Atmospheric Association (NOAA), which tracks and responds to entanglement incidences, cited 34 whales entangled along the California coastline by August 2015, 20 of which were Humpbacks, as reported in our 2015 article “All Tied Up.” Eighteen of those entanglements were right here in the Monterey Bay—a major feeding destination for the massive marine mammals, normally between April and October.
These entanglements, when they occur, can mean months of agony for a whale, in which time fishing gear can twist around their jaw, under and around their fins, or cinch tightly around their fluke. Without human intervention, these scenarios often lead to deep cuts, slow, excruciating amputations, and eventual death.
In 2017, the NOAA’s National Large Whale Entanglement Response Network confirmed responses to 50 entanglement cases and successfully removed fishing gear from 20 whales, which are the most recent reported figures available. However, the assistant California Stranding Network Coordinator for NOAA, Justin Greenman, confirmed five entanglement responses thus far in 2019.
“Everything is pretty much status quo,” he says. “We’re doing what we can to train people and build the network to spot entangled whales. We’re gearing up and waiting for those calls to come in.”
You can report an entangled whale incident by calling NOAA at 877-SOS-WHALE.